Over the last few years, I've talked a lot about the importance
of lifting fast. I've thrown around some research, I've given
anecdotes, and I've spent time in seminars doing a lot of hand
waving and chaotic laser pointing, all to demonstrate that you'll
recruit more motor units when you lift explosively, and this will
better serve your workouts.

Heck, I've even offered up TC's home, complete with freshly
imported European princesses, for those who could prove
otherwise. 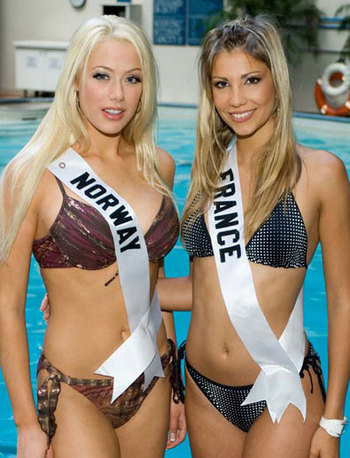 Nevertheless, there's still work to be done. So, I've outlined
three more reasons why you should perform explosive lifts in
the gym. If this list can't convince you to include at least a bit of fast lifting in your routine, you might want to seek
professional help to discuss why you're avoiding maximum
success.

I'm about to discuss some groundbreaking research with regard to
explosive contractions and energy expenditure. But before I do
that, let me explain why the research in question really is worth
getting excited about.

Ever since commercial gyms, like Bally's and 24 Hour Fitness,
became popular, people have been training with slow tempos. The
reasons are numerous, but at the top of the list is that noticeable
"muscle burn" feeling that people get when they lift slowly for
long, drawn out sets.

This burning sensation makes people feel good. It makes
them feel like they really worked their muscles. And if muscles
feel like they're burning, that means fat loss is just around the
corner, right? Heck, that's probably how the terms "burn" and "fat
loss" got associated with each other.

Eventually, exercise physiologists pointed to increased lactate
levels from the "muscle burn" as being a catalyst for fat loss. The
theory goes like this:

Training with a lot of slow reps and long sets releases high
amounts of lactate. That lactate, in turn, is purported to increase
the production of growth hormone. The increased level of growth
hormone induces fat burning and muscle growth – the two key
effects that have made Growth hormone a household
name.

The lactate and Growth hormone connection is nothing new. It's
been mentioned by everyone from Christian Thibaudeau and Don Alessi
to Charles Poliquin and Paul Chek.

Indeed, quite a few experts have pointed to the relationship
between high levels of lactate and the subsequent fat burning from
Growth hormone as being the primary goal of an effective fat loss
training plan. (I was as guilty of this as any.)

This brings me to a recent study where two human performance
laboratories analyzed the effects of explosive lifting versus slow
contractions, with regard to energy expenditure. (1)

The researchers looked at three different training protocols,
but I'm going to focus on only two. Why? Because the two protocols
perfectly mirror each other, except for one variable: the
speed of the lift.

Here are the parameters the two groups followed: 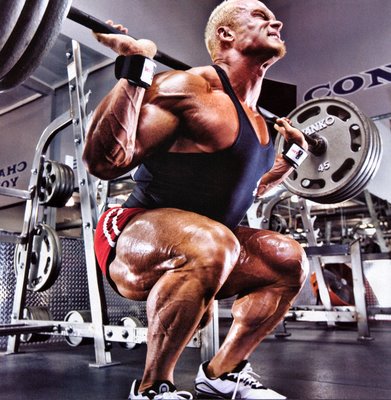 The research team demonstrated that the explosive group had a
higher rate of energy expenditure during and after the workouts,
compared to the slow group.

Here's a statement from the paper:

So if you' re trying to lose fat, it makes scientific sense to
lift explosively. This is exactly what I've seen with my
clients.

Years ago, when I started training my clients to lift loads as
fast as possible, I observed three things.

• They lost fat more quickly than they did with slower
tempos.

These performance and body composition changes, of course,
really piqued my interest. In fact, the observations with my
clients in the weight room are what led me to pursue a graduate
degree in neurophysiology.

When you look at what limited exercise-based research there is,
between lifting speed and motor unit recruitment, it made sense
that faster lifts would lead to better results in the gym,
regardless of your goal.

But there was one big problem – pertinent research to
support what I was saying was nowhere to be found. That's why this
recent study was such a breath of fresh air. It's the first of its
kind. No other research team has ever used exactly the same
parameters to compare slow and explosive
contractions.

Should We Still Care About Lactate?

There's another element of this study that will surely leave
body composition coaches scratching their head, and it brings us
back to the lactate and fat burning relationship.

These researchers compared blood lactate levels between the slow
and explosive groups immediately after exercise and at various
post-workout time intervals. Guess what?

This research demonstrates that explosive lifts are better for
fat burning even though lower levels of lactate were
produced. That's some exciting research!

The take-home point is that, not only are explosive lifts good
for building strength and muscle, but you'll also burn more fat
than slower lifting.

Imagine that you're holding a moderately-heavy dumbbell in your
right hand. I tell you to curl it for a count of three, and you
have to give me feedback based on what you feel throughout your
entire body. 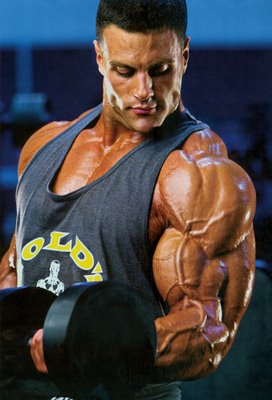 So, you curl it up slowly before lowering it back down. The task
was a cinch, and you give me a look to say, "What in the hell was
the purpose of that?" Don't fret, I'm getting to my
point.

Next, I ask you to use the exact same dumbbell, but this time
curl it up as fast as you possibly can. I mean, curl it up hard!
But... before you do it... I ask you to really think about
what you're feeling throughout your entire body.

So you get your mind ready, and then, bam! That sucker
moves at top speed. Whenever I have my clients do this test, and I
ask what feels different, most people respond, "I felt it more in
my core, especially on the right side."

Before I explain what just happened, let me outline one more
scenario to drive the point home. Let's say you're standing in line
at the movies, when a little snot-nosed, Pilates-practicing kid
decides to tug on your right arm so he can ask you for your
girlfriend's digits. The tug didn't do much, it was just enough to
get your attention.

Now let's say a big, hulking douchebag wearing Armani sunglasses
wanted to get your attention for the same reason. Since he can
obviously hold his own in the weight room, he gives your right arm more than a tug... he yanks it so hard that you fall over,
spill your drink, and lose your girl. 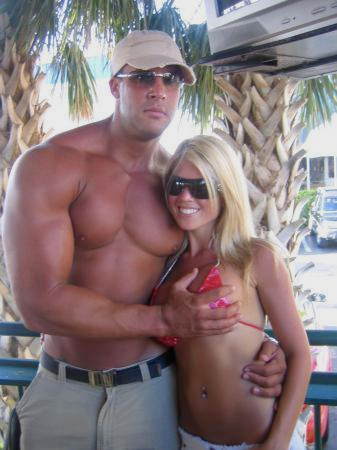 What's the difference between these two scenarios? In the first
case, the opposing force from the little kid was small so your core
and lower body had no problem counteracting the
force.

In the second situation, the tug was excessive so your core and
lower body muscles weren't ready for the large opposing force.
Because of this, you lost your balance and ended up licking his
boots.

This analogy is what separates explosive contractions from slow
contractions. When the opposing force is great (analogous to when
you curl a dumbbell as fast as possible), your core, hip, and lower
body muscles have to fire hard to stabilize your
torso.

What's the take-home point in this case? Lifting explosively
requires the recruitment of many additional muscles to stabilize
your body. This builds total body stability and strength. The same
type of strength that any badass dude should possess; one-trick (or
one-lift) ponies need not apply.

There's no need to stand on a Bosu ball and look like a dweeb.
Just lift fast! Also, be sure to incorporate single-limb exercises
into your training plan in order to really reap the benefits
of enhancing stability strength. 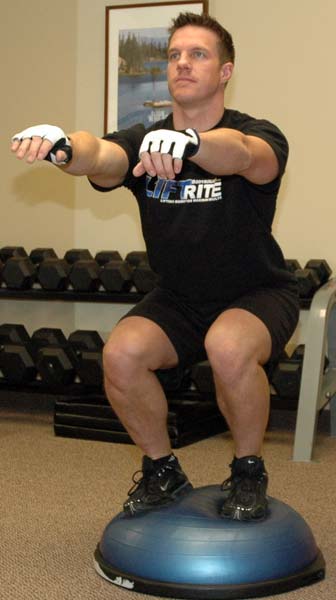 It's important to remember that your nervous and muscular
systems can't maintain high levels of force for long, before they
peter out. As a general rule, you should limit the duration
of each set to 15 seconds or less.

By doing so, you'll maximize motor unit recruitment and you'll
be able to train with heavier loads. Of course, there are
exceptions. And that brings up the next point.

Some people, especially athletes, should perform longer
sets because they need to maintain their efforts for more 10 or 15
seconds. Basketball players, soccer players, wide receivers, and
400-meter sprinters are just a few examples. Keep in mind, though,
that the positive correlation between lifting speed and motor unit
recruitment doesn't change. Faster lifting is still more
effective.

Let's say you're training a guy to run the 400-meter race. In
most cases, this event will take around a minute to complete. So
you have him perform squat and deadlift variations with sets that
last approximately one minute, as a means of strength-specific
training.

However, this is where trainers often fall short. Since the set
is longer than normal, they allow (or even instruct) their athletes
to lift with a slow, smooth pace. A much more effective option
would be to perform each rep as fast as possible, even though
endurance is the goal. This brings us three
benefits.

The difference between strength endurance and endurance strength
isn't just semantics. When training for the former, your primary
objective is to build strength using endurance protocols; with
endurance strength, your predominant focus is endurance without regard to how much strength you can
build. 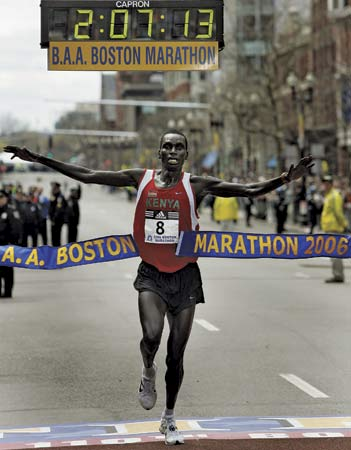 Marty Gallagher likes to refer to strength endurance as
"sustained strength." This is the ability to maintain a high level
of power for an extended period of time, and you simply can't build
it by lifting slowly with light weights, no matter how much you
"feel the burn."

Now you've learned three more reasons why you should consider
incorporating explosive lifts into your training plan. Remember,
though, that the actual speed of the lift is going to be relatively
slow due to the heavy loads. It's the intent to move the
weight fast that matters.

Instead of following a super-slow training protocol at your
local YMCA, stick to training with the IMCA – intended
maximum concentric acceleration.

Most exercises have value if you do them correctly. But not these. Hope you're not doing any of them.
Bodybuilding, Training
Christian Thibaudeau May 4

What do you do if you want to perform Olympic weightlifting at your gym but it's not possible or it's against the rules?
Powerlifting & Strength, Training
Wil Fleming August 16 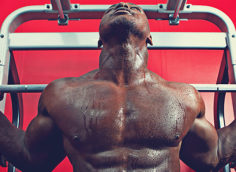 This article will make you feel like you hired an efficiency expert to analyze your workouts and help you throw out all the garbage.
Bodybuilding, Training
Andrew Heming November 28

A bar takes the ab rollout to the next level. Try a wide grip to hit the chest and shoulders as well as the abs. Have a super strong core? Narrow the grip.
Abs, Exercise Coaching, Tips
Drew Murphy July 7