Sometimes I can't make it to the revered Gold's Gym in Venice to do my workouts, so that means I'm often relegated to the fitness facility that's in my complex.

Recently, I was working out in my complex's fitness facility while a young woman was doing the same. It was late and we were the only two in the place, so instead of acting like we were alone she decided to strike up a conversation. Maybe it was because what I was doing was drastically different than what she was doing. Or maybe she just wanted to be a Chatty Cathy.

"Been living here long?" she asked.

"Just about a year," I replied.

"What do you do for a living?" was her second question.

This is usually where I hesitate – especially in a gym.

The most innocuous answer I could think of was that I write for fitness magazines. "Cool," she said. I was ready for the obligatory question that was sure to follow – it did.

"Are you a personal trainer?"

I'll give you full disclosure. Regardless of the fact that I've been training people for 12 years, I usually answer that question with an emphatic no. But I pulled in the reigns a wee bit and replied, "Not any more."

There are two reasons why I avoid divulging my training business to complete strangers. First, I'm not looking for clients since I only train one-on-one on a very limited basis these days. Second – and this is especially true in a gym – I don't want to spend the remainder of my allocated training time telling people how to train and eat.

When she casually stepped off the aerobic machine, there wasn't a single bead of sweat on her forehead. (No surprise since she couldn't have swung her legs any slower during those 15 minutes.)

Then she headed over to the area that featured dumbbells and a few outdated machines. For 15 minutes she performed a circuit of arm curls, leg extensions, straight leg raises, and side bends – lots of side bends, with a 25-pound dumbbell to boot.

"Yeah, that's what most girls tell me," I replied.

The girl was probably around 30 and she had a decent body, but she could definitely stand to lose about 15 pounds of fat. In fact, her body was very similar to most of the girls you see in the gym. Not fat, just kind of frumpy. She was the kind of girl you knew was pretty hot when she was in high school, but Father Time and hormones were starting to rear their ugly head.

I liked the girl and I genuinely wanted to help, but she made a critical mistake: she sought training advice from me while I was working out. It was clear to me that her workout was coming to an end, and it was probably clear to her that I wasn't going to be much help. So we exchanged the mandatory, "nice to meet you" hogwash and she headed out the door.

She'd fallen into the same trap that 90% of the females I encounter often occupy. Her training program sucked – big time. I didn't need to ask her about her eating plan to know that it probably wasn't ideal either. But the meeting definitely wasn't a waste. It inspired me to put together a list of essential points for all you ladies who want to burn off fat.

If I wasn't such a crotchety bastard during my workouts, this is what I would've told her.

If you're not sweating within five minutes of starting your workout, you need to rethink your choice of exercises. My female clients almost always start their training sessions with rope jumping. I love rope jumping for the simple fact that you can't cheat. Sure, you can try to slow down the movement, but it's still challenging, and virtually no other exercise will get you sweating faster than rope jumping.

So your first step is to start jumping rope at the beginning of all your workouts. Start with five minutes. Most of you probably won't even be able to jump rope for five minutes straight, but that's fine. Just watch the clock for five minutes and perform as many revolutions as you can.

Do this before all your weight training workouts or at least three times per week. Every workout add 30 seconds to your time until you reach 10 minutes. The ultimate goal is to work up to 10 minutes of continuous rope jumping before you hit the weights.

By jumping rope you'll burn a lot of calories, you'll develop your legs and shoulders, and you'll be well prepared (warmed-up) for lifting weights. If you're not sweating within five minutes of continuous rope jumping, jump faster and/or higher.

A good jump rope costs you less than 10 bucks and you can take it anywhere. Moreover, 10 minutes of rope jumping is one of the most efficient fat-burning exercises you can perform.

Watch the clock for five minutes and perform as many squat thrusts as possible. These are even more demanding than rope jumping, so you probably won't be able to do many. With each workout, or at least three times per week, increase the number of squat thrusts. Eventually, you should be able to perform squat thrusts for five continuous minutes at a moderate pace.

Whether you choose rope jumping or squat thrusts with jumping jacks, you'll be sweating by the time you hit the weights!

A total body workout consists of at least one of the following compound movements in each workout: an upper body pulling, an upper body pressing, and a squat or deadlift variation.

The lat pulldown/push-up/deadlift is a good example, so is a row/overhead press/squat. There are dozens of different combinations when you consider changes in hand and foot positions and different angles of resistance.

You'll use the same load for all sets. In other words, there's no need to mindlessly adjust the loads as you fatigue. Just stick with the recommended loads and total reps, and the other details will take care of itself.

Note: for this session, don't rest between limbs. Perform a dumbbell row with your right, then immediately perform the same reps on your left. Then rest for 45 seconds and continue with the sequence until you reach 35 total reps. All exercises on Wednesday should be performed that way.

What About Ab Work?

There's no need for direct ab work with this plan since the compound movements will challenge all of your core muscles. But feel free to throw in a few sets of the ab wheel or reverse crunch at the end of your workouts.

What I didn't tell the girl at the beginning of the article was that a side bend is one of the worst exercises a girl can do if she wants to keep a slim midsection. Building up the size of your side core muscles only makes your waist bigger. Avoid them.

The same is true with curls. A female who simply wants to look good has no reason to ever do a curl. All of the biceps stimuli she'll ever need will come from compound pulling exercises. I've never met one non-competing female that wanted big biceps, but that's just me. Curls aren't for girls!

Consume 5-6 meals per day and eat protein and vegetables at each meal. How much of each? It doesn't matter at this stage, just eat until you're full, but eat your protein first.

For your three main meals you should eat a serving of protein that's the size of a deck of cards. For your snacks, shoot for at least 15 grams of protein in the form of anything you like, as long as it's a complete protein. Examples include cheese sticks, cottage cheese, hard-boiled eggs, chicken breast, or salmon jerky.

With regard to vegetables, any will work but I prefer that you stick to the green variety. Green vegetables such as broccoli, spinach and asparagus are loaded with nutrients, they have very few carbs and they contain enzymes that help you assimilate protein. Alternately, you can check out Biotest's Superfood product, which contains 18 different fruits and vegetables.

Fish oil, or more specifically, omega-3s are absolutely essential to help you lose fat. You can't go wrong with six capsules of Flameout™ divided into two equal doses in the morning and evening hours.

Is there anything else you can do to lose fat? Sure, any form of energy systems training that's limited to 20 minutes of medium to high intensity exercise will help. But the aforementioned three steps are the most important steps that I could've told that girl within five minutes. And you know what? If she would've followed the advice she could've lost at least two pounds of fat per week for quite a spell.

But unfortunately, I didn't tell her, and that's why I'm telling you.

Coach Boyle's been dragging his calloused butt through the weighlifting business for 25 years. During that time he's made a few mistakes, but luckily for you whippersnappers, he wants to save you from making those same mistakes.
Training
Michael Boyle March 1 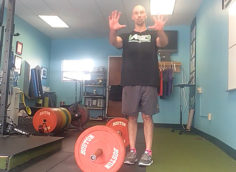