Tom Platz, aka "the Quadfather," was of course known for his hyper-normal leg development, much of which he credited to doing high-rep squats.

That's notable; something to put into the memory banks, but it might require some additional perspective.

Let's say, for instance, that I told you I just ate a lot of sushi – 15 wasabi-spiced pieces. But my definition of "a lot" becomes meaningless when you maybe point out that the great Sumo wrestler Orora Satoshi could put away 200 pieces of sushi (washed down with a crate of beer) in a single sitting.

Now that's a lot of sushi (and beer) by anyone's standards. Similarly, you or I might think that 15 reps might constitute a high-rep set of squats, but when you compare it to what Platz routinely did, you see there's a cosmos of difference.

Consider that Platz once did 52 reps with 350 pounds. He reportedly squatted for 10 minutes straight with 225 pounds on his back, totaling more than a hundred reps. Then there's a video from 1992 that shows him squatting 495 pounds for 23 below-parallel reps.

There's no doubt about it, Tom Platz, the Satoshi of squats, was a squattin' fool.

On one stratum are the weightlifting gods like Platz, and then, several levels lower, are the rest of us for whom doing 20 reps seems like something to puff our chests out about, especially when those 20 reps are what are often called "breathing squats."

They're called that because if you don't take extra time to breathe between reps, you die. Or almost die. Or at least wish you would die.

Typically, you take a weight you can squat 10 times and then defy nature, physics, time, and space, and somehow do 20 reps without racking the bar.

You do this by pausing as necessary between the later-stage reps and taking several deep breaths before you attempt another rep on your torturous route to 20.

A single set might take three minutes... or ten.

The technique, as far as we can tell, was devised by lifter Randall J. Strossen in the late 80s and popularized through his book, "Super Squats – How to Gain 30 Pounds of Muscle in 6 Weeks."

His program was as follows:

Sure, it was a total-body workout, but it was really all about the squats. Here's how you were supposed to program them:

Now it's quite possible you won't be able to add weight on every workout. That's okay. Just keep using the same weight until you're able to hit 20. That, or take more days off. Or hire someone to break ammonia capsules under your nose during your set. Whatever it takes.

This may sound brutal, and it is. The always-quotable Mark Rippetoe, commenting on the difficulties of the program, stated, "If you can do an honest 20-rep program, at some point God will talk to you."

I was about a third of the way through Strassen's 6-week program (the squat portion of it), and right during a set of breathing squats, probably somewhere between the 16th and 19th rep, a thought occurred to me.

Whether it was inspiration or just hypoxia, I'm not sure, but I suddenly got the idea to try the "breathing squat" method on other exercises. Why not do them with, say, shoulder presses, curls, lying triceps extensions, dumbbell bench presses, straight-leg deadlifts... any exercise that allows you to "rest" when the muscle or muscles are in the shortened or lengthened position, depending on the exercise?

You could even do them with deadlifts (although you might have to use wrist wraps).

So I experimented... and the results have been good. Granted, you won't end up gasping for breath on most of them as you do during squats, and you might not experience systemic growth from bringing yourself close to death, but who cares? Regionalized growth is just fine, thank you.

Regardless, the principle is the same. Take triceps extensions, for example. You take a weight you can normally do for around 10 reps and then, without putting the weight down, using pauses and deep breaths as necessary ("resting" when the arms are in the extended position instead of the contracted position), you do 20 reps.

Once you're able to do 20, you add a tiny bit of weight during the subsequent workout.

Here's the rationale: There are plenty of muscle physiologists – armchair and degreed – who believe that it's only the last two or three reps of a conventional set that are worthwhile. After the first few easy "garbage reps," fatigue starts to set in and lesser motor units fail, forcing the most stubborn – and most susceptible to hypertrophy – motor units to kick in until they too fail.

With the "breathing method," you only rest a few scant seconds (the "breathing" reps) before you put those high-threshold motor units to work again, rep after grueling rep. Presto! You've eliminated the garbage reps.

As I said, you can try it on/with almost any exercise. It's also very satisfying.

This is all virgin territory. There is no definitive way to use them... yet. I'm simply experimenting. For the time being, I incorporate one set of 20-rep "breathing" sets for two different exercises per workout and alternate body parts throughout the week so that every major body part gets its share.

If you can hit 20 on any given exercise, you increase the weight the next time around.

Give it a go. God might not talk to you, but if you're lucky, you'll see the astral spirit of Tom Platz, who might, if he's feeling magnanimous, give you one of those so-so gestures with his hand. 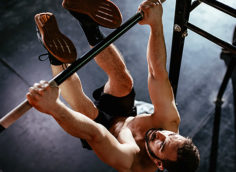 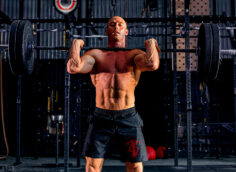 The best way to keep making gains? Don't get injured. These workout strategies will not only make you stronger but also more resilient.
It Hurts. Fix It. Athletic Performance
Dr Tim DiFrancesco January 27 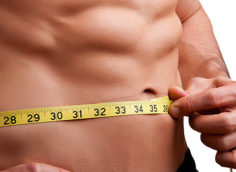 Science gives us a new way to figure out how much fat we're carrying. All you need is a tape measure. But is it any better than BMI?
Bodybuilding, Metcon, Tips, Training
TC Luoma September 23

Ready to undergo a major mutation of body composition? Here are weeks one through three of your next big transformation.
Bodybuilding, Training
Christian Thibaudeau April 23