Strength training gurus love to say there's only one way to perform a lift, and that all other techniques and variations are either wrong or ineffective. Such a philosophy is shortsighted, and this article will show how intelligent variation can build a bigger, stronger, bulletproof body.

First, every body is unique, and the best form for a lifter is the one that best suits his or her unique limb lengths, body segment proportions, tendon attachment points, muscularity, and injury history.

And third, all lifters should purposely perform lifts in a variety of ways in order to build well-rounded and maximal strength.

Stubbornly sticking to a particular form or variation that isn't right for you, no matter how popular it is, will eventually lead to injury. It's akin to forcing a square peg through a round hole.

All my powerlifting and strongman friends look markedly different when they squat, deadlift, and bench. Hell, take a look at the various powerlifting world record holders, strongman champions, top Olympic weightlifters, and even the best bodybuilders on the planet – you'll see that their techniques with the big lifts vary markedly.

They've all taken the time to figure out the style of each lift that caused the least pain and injury, maximized their leverages and performance, and/or allowed them to best reach their particular goals. What's hilarious is that many of these top strength and physique athletes "break the rules" according to various experts, making it difficult to find merit with any hard rules in lifting mechanics.

The top lifters have also taken the time to figure out their favorite exercise variations. The top bodybuilder might prefer rack pulls over full-range deadlifts because they're safer on his low back, but still might hammer his entire posterior chain.

The strongman might tell you that he gave up low bar squatting years ago to preserve his shoulder health, but that he still front squats every week. Lastly, the top Olympic lifter may prefer the Romanian deadlift and high-bar full squat as assistance lifts, whereas the top powerlifter might prefer the deficit deadlift and high box squat. You get the picture.

I realize most don't have access to specialty bars, so I only included traditional barbell variations. However, there are dozens of incredible variations that use the rackable cambered bar, safety squat bar, or Dead-Squat™ Bar, to name a few.

Strong quads are critical for proper squat performance, as are strong hips. You should incorporate both types of squats into your training arsenal.

Usually, high-bar squats are performed with a moderate stance as opposed to a very wide stance. Again, the high-bar squat emphasizes the quads, whereas the low-bar squat will emphasize the hips. Both variations are great for squat training.

Most of the time, when you see someone performing front squats they're using a narrow stance. But there's no reason why you can't perform front squats with a wider stance. Again, both should be used in your training regimen.

Most lifters are familiar with high box/low bar squats where they sit back and keep vertical tibias, thereby maximizing stress on the posterior chain. However, it's also a good idea to perform low box/high bar squats from time to time. This variation places considerable stress on the quads and is quite useful depending on the purpose.

You should perform both conventional and sumo deadlifts from time to time. They build each other, especially if you have a huge strength discrepancy between the two variations.

The same logic applies to block or rack pulls. You can and should use a conventional and sumo stance throughout your training year.

When you pull sumo, there's a sweet spot for trunk angle and joint ROM that enables you to hoist the heaviest loads. That said, sometimes it's a good idea to use lighter loads and practice your sumo deadlifts using a quad-emphasis or a hip-emphasis. With the quad-dominant style, sink deeper and keep a more upright trunk. With the hip-dominant style, raise the hips and use a greater trunk lean.

When pulling from a deficit, you should employ a traditional grip width as well as a snatch grip width. The snatch grip deficit deadlift increases joint ROM and is a brutal yet useful variation.

The hack lift is a nifty way to build quad strength in a deadlift. Just place the bar behind the back and try to mimic your typical deadlift form. This variation stresses the knees and should be used only occasionally. The lockout can be tricky, but most lifters can learn to perform the movement correctly with practice.

Variety is good for both strength and hypertrophy and it helps prevent overuse injuries. Through tremendous effort and experimentation, accomplished lifters determine optimal positioning and technique for their bodies as well as figure out the movements that transfer best to their particular goals.

The takeaway point is that the best do what works best for them, not what some guru tells them to do. Contrary to popular belief, there's no standardized perfect form, only what form is best suited for your body and goals.

There's more than one way to skin a cat... or squat or deadlift a weight. 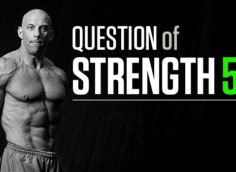 How should you warm up to hit your 1-rep max? How should you peak for a powerlifting meet? Get those answers here.
Question of Strength, Training
Christian Thibaudeau November 7

This twist on the dumbbell row will light up your rear delts and lats like nothing else. Check it out.
Tips, Training
David Otey March 1
As I sit here in the airport reflecting on my recent trip, I'm once again exposed to the reality that most Americans just don't move. At least not under their own power. Mostly we just like to sit motionless.
Training
Lonnie Lowery, PhD November 21