Extending a workout by diminishing the tension required to do the exercise is nothing new. Most trainees will do this by getting sloppy with their form or reducing weight. There's another alternative, and it may be safer than forgoing form to accommodate extra motion. The idea is to start in a fairly high-tension position and as you fatigue, move to a lower tensioned style or position.

This takes some inventiveness and has in fact been exploited to a small degree in the machine training of the 70's. However, using dumbbells, benches, and barbells can provide ample variation and a less restrictive format.

The idea is to use an exercise that's hard but not do it until you reach failure. Instead, you find a way to stimulate the muscle and make the last few repetitions safer and more productive. This style of training was given the exotic name of "Duo Symmetric, Poly Contractile Training," by Arthur Jones. "TAT" is easier to remember. No need for giant crocodiles, multiple divorces, or chain smoking, either.

There are four stages in this style of training. Sometimes only three are used as Stage 2 can be skipped if coordination is an issue. Making things overly complex solves nothing and will affect training motivation.

Let's use the overhead press with dumbbells as an example. As stated, there will be four stages to this particular exercise:

1st Stage: Both bells stay locked overhead. Lower one bell to shoulder level and then lift it overhead. Repeat with your other arm.

2nd Stage: Bells move in a "see saw" fashion. They're both in motion at the same time. As one goes up, one goes down. This movement is not separate, but together; one continuous motion.

3rd Stage: Bells are held at shoulders and pressed overhead together to full lockout like a standard press.

4th Stage: One bell is pressed overhead, while the other is held at the shoulder; essentially an alternating dumbbell press.

Obviously, in exercises where you normally begin with the limbs extended, e.g. dumbbell rows, you'd begin the extended set with the arms contracted instead of extended. Otherwise, the process is the same:

Here are some of the possibilities:

These drills are very similar but unfortunately require an uncommon piece of machinery. In both cases it's required that you work short of 'failure of form' and use smooth transitions. The machines reduce the need for stabilization and are more aligned with the goal of isolation.

4. Dumbbell Row: The dumbbell row may require that you brace your head on an elevated bench thoroughly padded with a towel. This will relieve some low back pressure and focus your energy on rowing, not stabilizing the torso so your disks won't shoot across the room as if they were clay pigeons at a target shooting contest.

Keep in mind that you'll be starting the sequence with the dumbbells held close to your body, as opposed to the normal arms-extended starting position.

5. Leg Raise, Knee Raise /Hanging or Grounded: Whether you choose to do hanging leg raises or hanging knee raises is based on the strength of the abdominal wall.

If its integrity and firepower is adequate, you can do the leg raises. If not, stick with knee raises. Nothing worse than waking up with your psoas muscles pulling on your lumbar vertebra like monkey on a coconut tree. Use common sense. The fatigue on your frontal thighs will be like nothing you have ever felt. I'd expect you do this hanging and not in one of those overgrown high chairs designed for "women's fitness spas." If your grip is a problem, try this: develop one. 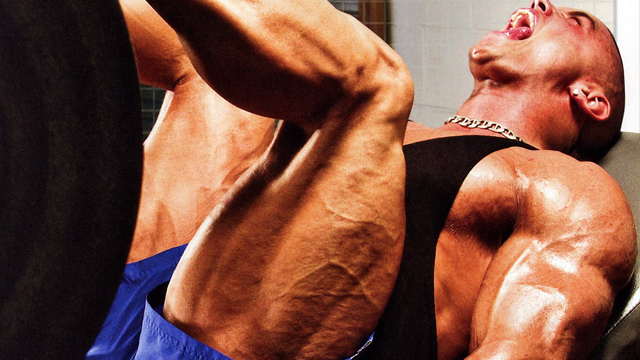 Once again, these machines – some of them almost antiques – aren't easy to find in training centers. If you have access to them, try the TAT technique.

9. Front Deltoid Raise: Most everyone can remember Arnold in Pumping Iron doing front deltoid raises as the crowd in the gym counted. I suggest a variation. Do your training with a bit more privacy and focus. Also, try pointing your thumb up. This will be more conducive to training the front of the shoulder.

As first offered earlier in this article, you may want to brace your back against a bench or upright for stability. Fire your glutes and abdominals to maintain the integrity of your posture. The dumbbells will start in front of you at slightly above-parallel with the ground with the thumbs up.

Lower your left arm and return to starting position, then repeat with your right. As fatigue sets in shift to the see-saw motion. Both bells in action at the same time, constant movement.

Shortly this will be miserable. Continue to stay upright and keep your chest up. Pause with both bells beside your hips and raise them at the same time to the previous slightly-above-parallel position. Take a pause at the top, keeping the focus on the deltoids.

The home stretch requires you to leave one bell beside the hip in a straight arm and raise the other to the top position a la Arnold, but with the corrected, thumbs up, biomechanics. This constitutes one set. How many you do is up to you and what stage of training or goals you've outlined.

10. Upright Row: The same form holds true for upright rows, except with this minor variation. I recommend you focus on keeping your shoulders down and keeping the lats contracted. Second, pull the dumbbell to just outside of the pectoral line and not to the centerline. This will help build shoulder strength and not put unmanageable stress on muscles groups by putting them in a disadvantaged position.

11. Dumbbell Curl: Using the dumbbell curl is probably the easiest exercise to employ TAT (since it's the most practiced one). However, greater benefits on systemic conditioning and adaptation will take place with drills that use bigger muscle groups.

12. Dumbbell Triceps Extension: Dumbbell triceps extensions should be done lying on a bench, or even a mat. I prefer this variation to the standing one since there's less stress on the elbows and shoulders (given that TAT techniques involve longer-than-normal time under tension).

13. Calf Raise: We have to get a little creative with calf training. Get into the top position in a standing calf machine. Lock out your knees and carefully shift your weight to one leg, now lower the weight with that calf and move slowly to the stretched position. Quickly move to the top position with BOTH calves. This is "two up, one down" training. When this becomes unwieldy, move to "two up, two down," style. The difference is this: you hold the stretched position for a count of ten.

This is a modified TAT style. We're still playing with time under tension and altering it within one set.

14. Dumbbell Pullover: This dumbbell drill can be miserable. You must be aware that the "top" position is not neatly aligned with the 'bell over your sternum. That's too easy.

The bell should travel to a comfortable, safe stretch, and return to a position above your forehead. The other bell remains locked in the stretched overhead position. Remember when I said miserable? This severely limits the weight used, but that will be the least of your problems. I'd recommend keeping a palms-facing grip with the thumb up.

15. Dumbbell Incline Fly: I choose the incline fly because the flat fly would involve too much stabilization that would distract you from the focus needed to activate your pectoral muscles.

The most important part of this exercise is to adopt an overhead position that's not straight above your sternum, but located laterally to the centerline so that tension is constant on the pectorals. This exercise at best will look odd, and at worst you'll be laughed at.

Go through stages 1, 3, and 4. Ignore stage two since it's unwieldy and not productive with this particular set of circumstances. The last stage, with one arm in a stretched position while the other is mobilized, must be done with intense control. A fatigued muscle in the stretched position is under high stress. You will be using NOWHERE near your maximum poundages in this drill. Just use common sense and smooth execution. 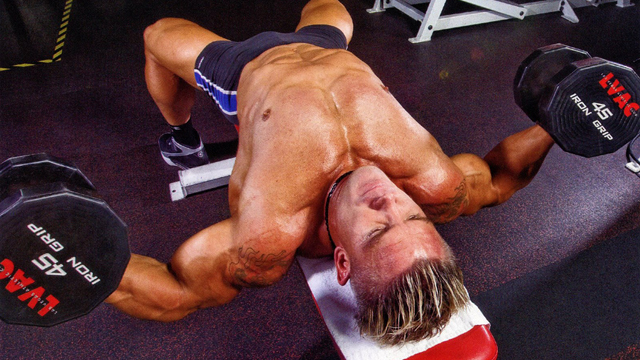 16. Reverse Hyper Extension: You'll never laugh at those stability balls again. Lie face down on a ball. Hold onto something sturdy. Real sturdy. Contract your gluteals and low back. Your legs should look like a scorpion on a Sunday stroll.

Now lower one leg and return to the top. Lower the other and repeat. Stage two, seesaw. Both legs in motion. Stage three, both legs up... both legs down. Stage four, one leg hangs in the stretched position while the other moves to the contracted one. Your posterior will be crispy after this bout.

17. Forearms: Wrist curls were a standard during the sixties and seventies. No reason to forget them now. You'll need dumbbells whether using an overhand/pronated grip, or an underhand/supinated grip.

Try sitting on a somewhat elevated bench. You want to have your lower arms on a decline while resting on your thighs. This will increase the amount of tension in the contracted position and make the exercise as comfortable as water boarding. 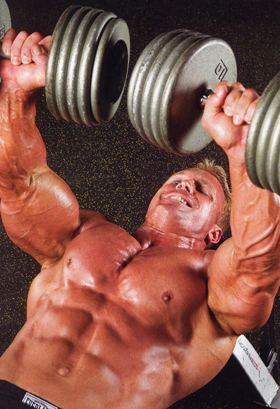 18. Dumbbell Bench Press: Using dumbbells for the bench press movement is a natural here. This is essentially no different than training in a dedicated machine with independent movement arms. Of course you can do it flat, inclined, or declined. All four stages are easily managed but maybe not so to the newbie. Plan your weights and sets carefully.

Doing a whole workout this way is a possibility, but working yourself into a hole isn't a good thing. Techniques like these simply allow options to enhance or change your workout with a distinct level of variation.

Obviously, the TAT Methodology lends itself to machine training rather well. Of course, the average home trainee may find himself applying this to his dumbbell exercises quite frequently. It can also make some exercises absolutely miserable, so if you're into that Rhabdo/slap tear kinda thing, this method might be right for you. Using cables, if you have access to them, is only limited to your imagination.

Amongst some of these variants, it's possible to skip stage two since coordination is sometimes elusive. It also might not be practical due to physics and stability. Your first set of dumbbell flies will probably require an exorcism afterwards, so be careful to use light loads while you're learning the technique.

Using a training partner to cue you during TAT is also a good idea. When localized oxygen debt begins to rear its ugly head, logic hides in the dark corners of the brain. As Mike Tyson said, fight plans work great until you're punched in the mouth.

She did 15 minutes on the elliptical trainer. Then she did arm curls, leg extensions, straight leg raises, and side bends-lots of side bends. In short, she was doing everything wrong.
Training
Chad Waterbury February 12

An untrained back is an injury-prone back. Here's an exercise powerlifters use to bulletproof their lower backs.
Exercise Coaching, Tips
Christian Thibaudeau February 6