The Loaded Back Extension

Hyperextensions. Back extensions. Prone hip extensions. Whatever you call this exercise, it should be a staple in your training program.

Loaded back extensions are the most underappreciated assistance exercise for improving your deadlift. They’re also incredibly effective at building the glutes and hamstrings. The problem is, most lifters forget the “loaded” part of the equation.

Back Extensions are Not a “Back Exercise”

When you perform any type of hip extension drill with a neutral spine (RDL’s, good mornings, hip thrusts, etc.), the spinal erector musculature acts statically. In other words, they stabilize the spine while the glutes and hamstrings contract dynamically to extend the hips.

So in reality, since dynamic muscle activity trumps static for hypertrophy purposes, the back extension is actually a glute/hamstring drill, and a damn good one at that.

How Much is “Heavy”?

Just for quick reference, I’m 58 years old and I weigh 194 at 6’2″. I routinely do back extensions with 150 additional pounds for sets of 10-12 reps. If my gym had heavier dumbbells I’d use them. Most of you should be shooting for heavier weights than what I use.

It shouldn’t come as a shock that back extensions could add pounds to your deadlift, but if you’ve only done them with bodyweight, you’d be forgiven if you never arrived at that conclusion. It’s the loading that’s the missing link with this exercise. I’ll detail how to load this movement below, but first, let’s address the elephant in the room…

According to Dr. John Thoma, director of the Infinity Spine Center, “There’s no shortage of dogma regarding the dangers of compressive and shear forces on the lumbar spine. The danger lies in your lack of capacity to handle the load, not the load itself. This is evident by all the people that end up with days or weeks of lower back pain that keeps reoccurring from bending over to pick up a pencil from the ground, or the submaximal set on deadlift that sends you to the ground in agony.

“Loading the lumbar spine, within its capacity, with exercises such as the back extension is an excellent way to create adaptation to compressive and shear forces that we’re exposed to frequently in life, whether we’re deadlifting 405 pounds or picking up a pencil.”

“Loaded back extensions are very safe. I’ve never had a client experience an injury. But I make sure they’re not hyper-extending the lumbar spine during the movement and teach them to perform the movement as a hip extension motion rather than a lumbar extension motion. You want to keep the spine fairly neutral throughout the range of motion, get a big hamstring stretch down low in hip flexion, and squeeze the glutes at lockout in hip extension.”

There are two different types of back extension benches — horizontal and 45 degrees. While both are effective and can be used either sequentially or simultaneously in your training program, the 45-degree bench is preferable because it works the target musculature through a longer range of motion than the same drill performed horizontally. 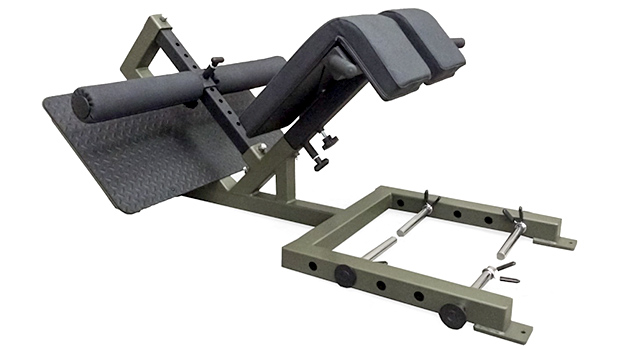 Range of motion is an important component of training volume, which is in turn a critical aspect of the overall hypertrophy stimulus.

If you’re still a bit new to this movement and you’re using less than 50 pounds of weight, you’ve got some options. You can use a weight plate, a kettlebell, a sandbag, or even a straight or EZ-curl bar either behind your neck or clasped in front of your chest. 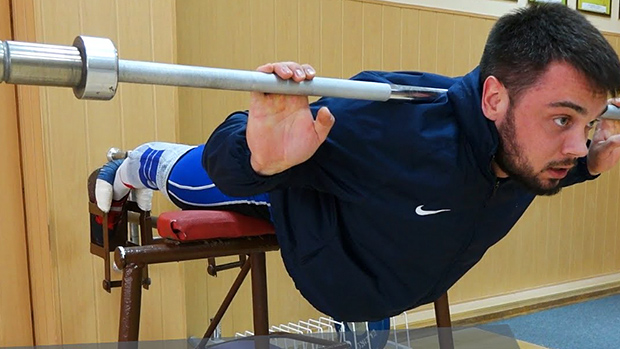 Once things get heavier than that, however, your options will be limited to a heavy dumbbell, a resistance band, chains, or some combination of the three.

The easiest and most practical option is to clasp a heavy dumbbell to your chest as you perform the exercise. Ideally, it’s best to keep the dumbbell close to the chest throughout the movement, but in cases where the dumbbell is very heavy, it’s permissible to simply keep it as close as possible.

You can also hook elastic tubing over your neck and anchor it to the frame of the machine below you.

Or, drape a heavy chain over your neck. Not very comfy but looks hardcore as hell on Instagram.

Positive Transfer to the Deadlift

Aside from its value as a general strength and hypertrophy tool, the loaded back extension is likely the most underappreciated assistance exercise for improving your deadlift.

I arrived at this notion while mining through my training journal over the past few years. I was going through a plateau on my deadlift and I was trying to determine what types of training typically preceded my best deadlift performances, compared to training periods leading up to days when my deadlift felt like dogshit.

After a while, I spotted something. Without exception, every time I managed to hit a 500 or heavier pull, it was always preceded by several weeks of heavy loaded back extensions. And, on workouts where I was struggling with 405, sure enough, no back extensions in sight.

Bret Contreras notes: “With regards to transfer of training to the deadlift, loaded back extensions in neutral are probably better suited for strengthening the initial deadlift range off the floor, whereas rounded upper-back extensions are probably better suited for strengthening the lockout position. But both should be performed for optimal hamstring and glute strength. Pete Rubish used them extensively in preparation for a legendary 900 pound deadlift.” 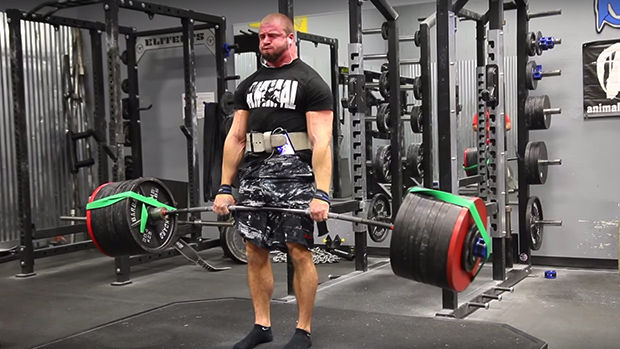 As you progress through the pull on any type of deadlift, constantly improving leverages reduces the adaptive forces on the body. This is why most people can block pull more than they can pull from the floor.

Yes, some have trouble at lockout. This is largely because even though leverages are improving, so is accumulated fatigue, so trying to improve lockout strength through doing the deadlift itself is often an exercise in futility.

This is where the back extension comes in. During this movement, the “lockout” (fully extended position) is the most difficult part of the lift. It’s where you experience peak tensions and full extension.

How to Program the Back Extension

There’s really no downside to adding 3-5 sets of loaded hip extensions to the tail-end of your deadlift session. It’ll take less than 10 minutes, it’s safe, and you’ll be surprised by the results, especially if you haven’t really given this movement a serious run.