There's nothing like a Biblical allusion to make a topic feel important. However, I'm not a religious guy – and definitely not one to impose my moral objections on others – so if you want to covet your neighbor's wife, it's not my place to tell you to clean up that filthy mind of yours.

But if you want to be the best lifter you can be, there are guidelines to follow. Rather than imposing a Decalogue, I came up with the five must do's for each lift.

Growing as a lifter means getting outside your comfort zone. I can't think of anything more uncomfortable than squatting for high reps. High rep squats conjoin the best of all worlds – hypertrophy, conditioning, and toughness training. It's no wonder guys like Dan John and Jim Wendler speak so highly of them.

2. Shoe Up According to Stance

Squatting starts from the ground up – all other mechanics depend on your stance. How you set your feet also determines what you put on your feet. If you squat with an Olympic stance, wear weightlifting shoes. They'll give you the ankle mobility you need to hit good depth.

Squatting with a powerlifting stance requires flat-soled shoes (Chuck Taylors or indoor soccer shoes). The flat sole will let you push on the outside of your feet to spread the floor.

3. Create Tension in Your Hands and Feet

More tension equals more strength, so if you want to squat heavy, you have to create as much tension as possible.

It starts at the top with your hands and at the bottom with your feet. Setting your grip hard on the bar creates tension that runs into your upper-back, solidifying a solid shelf for the bar to rest on.

Squeezing the floor with your feet creates tension that's transferred through your legs and into the hips.

Setting up to squat should use as little energy as possible. You're about to sit down with considerable metal on your back and that takes enough energy. Here's what an efficient set up should look like:

TC has a great quote: "What's the sense in looking like a Ferrari if you've got a Volkswagen engine under the hood?"

Since everyone needs a barometer to be measured against, I'll give you one. To be a strong squatter you need to squat two and a half times your bodyweight. And unless you are a world-class bench presser, you better be able to squat more than you bench. If you can't – start making the squat rack your church.

The emphasis of the bench press is not on your chest. EMG studies show that the muscles that do the most work are the triceps and deltoids. Check out a Louie Simmons bench press article or video. He's been saying the arms are the emphasis for years.

If you want to develop a big chest, keep the flyes and cable crossovers. But if you want to bench a lot of weight, overhead press and develop your triceps with board presses and floor presses.

If you're comfortable while benching, you're doing it wrong. You should feel like you might soil your underoos at any second. This tension and pressure comes from staying tight.

Does that sound like a lot? It is – benching is hard.

8. Align Your Wrists and Elbows

Practice throwing a punch. Provided you punch like you don't have a purse on your shoulder, you kept your wrist and elbow in a straight line directed toward the intended target. You have to bench in the same way. If your elbows are in front of the bar (too much shoulder external rotation) or behind the bar (too much shoulder internal rotation), you won't be as powerful.

Spreading the bar should help, but practice with an unloaded bar. A good bar path that keeps your elbows under the bar should start and end with the bar directly above your throat, with the bar touching just below your nipples in the bottom position.

Most bench training should be done with sub-maximal weights and through a full range of motion, but twice per year you should include a partial range of motion Max Effort training cycle. At the end of each cycle your nervous system will be primed to return to full range benching.

I'm not a fan of bench pressing for reps.

You can make hypertrophy gains and improve upper-body muscular endurance by other means that aren't as hard on your shoulders. Where I'm from, we do our benching heavy and fast. Use the bench to push the limit strength of your upper-body; hypertrophy your upper-body with push-ups, dumbbell press variations, and pulling movements.

That limit strength should be 1.75 times your body weight if you want to be considered a strong bencher. I don't base this number off a scientific formula. Paying attention to what strong guys can do has led me to decide that it's a respectable ratio.

A rugby player I train was required to train at his university's varsity weight room this past fall. The strength coach told him that he was to "Drop his ass low because the deadlift is just a squat with the bar on the ground." This is a popular misconception, and a bad one.

Deadlifting and squatting are not the same. One is hip dominant and the other is knee dominant. Treating them as interchangeable and teaching them with the same cues doesn't make sense. Doing so sets an athlete or lifter up for poor performance and injury.

Each day you train include hip mobility training, upper-back training, hip extension movements, and grip work – no matter the split. All of these components, minus the direct grip work, can be included during your warm-up.

A basic strategy is to do kettlebell swings and pull-ups every day. Circuit them with a hip flexor mobilization and a standing core movement and you've hit all the components while developing a great warm-up routine.

13. Prioritize Your Back and Hamstrings

You shouldn't prioritize low back training to improve your deadlift. Actually, it's last on the priority list – most sticking points are a result of deficits in the upper-back and lats or the hamstrings.

If you're training your upper back and hip extension movements well, your low back is going to get stronger. Although there's movement in the low back during a deadlift, the main role of the spinal erectors is stability. You can train for a stable low back with plenty of Romanian deadlifts, good mornings, and glute ham raises.

A lot of direct lower back training will exacerbate hyperextension of the lumbar spine, resulting in limited neural drive to the glutes. Work on keeping your low back in the same position throughout your pull and it will get stronger.

14. Grip the Bar Based on your Elbows

Biceps tears are an unfortunate injury that frequently occur while pulling with an over-under grip. The biceps of the supinated arm are put under extreme tension that causes them to pop like a jack-in-the-box. This has a lot to do with congenital laxity and elbow structure.

A chiropractor friend assessed me using the Beighton Laxity Scale, a test designed to determine how congenitally lax a person is. He found that I am congenitally lax, and that my elbows hyperextend at end range. Check out how my elbows lock at the end range of a push-up:

I've never felt the slightest twinge in the biceps of my supinated arm while deadlifting. My biceps are already long due to the laxity of my elbow, lessening the tension on the supinated arm. I've never read a study on this, but I have a hunch that there's little chance that I'll tear my biceps using the over-under grip.

If you, however, have shortened biceps because you've been curling like a mad man since the 80's, avoiding the over-under grip is probably the right choice. Without the necessary length, your biceps will be under too much tension as your elbows extend further, and you'll likely suffer a tear if you pull a heavy weight. Use a double overhand grip until your grip fails and then switch to the hook grip.

I've never met a man that was a strong deadlifter and weak in every other aspect of training. That would be like meeting a lumberjack that doesn't look amazing in flannel.

A strong deadlift has a powerful effect on strength in your other lifts. Gaining size and improving athleticism are also products of a solid pull, as powerful hip extension and a strong back are necessary for a strong and efficient body.

To be a strong deadlifter, you need to pull at least two and a half times your body weight. When you can, you'll have the strength base necessary to develop your body in any way you choose.

For many, the big three lifts can be likened to a religion, and those that train them habitually as disciples of power and strength. From one disciple to another, I hope you've developed your training commandments for each lift. But if you're lost, follow these fifteen rules to the iron promised land. 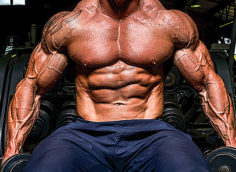 The complete, head-to-toe guide to fixing your bad posture. Check it out.
It Hurts Fix It, Mobility, Training
Eric Cressey & Mike Robertson May 28