There's a reason so many Testosterone readers have an unabashed man-crush on Dan John, and it's not because in a dark-lit room he sort of looks like George Clooney.

In an industry that seems to strive to make things as complicated as humanly possible, Dan John is the soft voice of simplicity. While others are arguing on-line about whether Paleo man ate sweet potatoes or the merits of the glycemic index, Dan is lifting weights, competing, coaching athletes, and most importantly, getting results in all of those activities.

Getting bigger isn't easy, but it certainly doesn't have to require more calculations than a manned voyage to Mars. Here are ten tips you can try to get the scale moving in the right direction. – Bryan Krahn

Sometimes, people just don't get it. Or, and I'm beginning to think this is happening more often, they simply don't have the tools to "get it."

I was standing with my assistant coach at a track meet and one of our runners was clearly floundering. It's not uncommon to watch someone who's underprepared and out of condition to flounder in the 400-meter sprint. Well, "sprint" is a bit of stretch in this example, but as he came by, one of his teammates yelled, "Don't give up!" I turned to my assistant and said: "Was it over when the Germans bombed Pearl Harbor?"

One of my athletes turned to us and said, in that sarcastic tone that God graces adolescents whenever they feel superior, "Coach, that was the Japanese."

Right. Except I was quoting one of the finest films of all time, Animal House, which belongs in the pantheon of Great Films along with Groundhog Day, Fight Club, and The Godfather. Somewhere, John Belushi groaned.

The point is, some people just don't have the tools to get it, and that's the issue most people face when they try to gain mass. I get quite a few emails from people, and I strive to answer them all intelligently, about my Mass Made Simple program that was published here not long ago.

Let's add some tools to your tool kit to get you going again.

There's a chance, especially if you're six feet tall or over or even just long limbed, that you simply can't handle the number of times a week that traditional mass building programs require. You need to rethink the week. Now, I was there for the first week and I clearly voiced my opinion that for hypertrophy training, taller guys should have a ten-day week, but God had other plans.

Change your week into a three-week pattern. For people who are honestly struggling in the gym for muscle gain, but failing to see any, consider training after two days of rest ALL of the time. It's easy to follow over three weeks:

The pattern then repeats. If you're doing those high rep squat workouts, it's very difficult to train three times a week. I experimented with training twice a week after a discussion with the late Goran Swenson after he found that Tuesday/Saturday workouts were really helping him stay stronger, longer. That might be worth a look, too, so try both options a few times and see if you begin growing again.

One of the most overlooked aspects of muscle building programs is a four-letter word: STOP. Stop playing basketball. Stop jogging. Stop doing step aerobics class. I swear, if I get one more email that say something like this, I will do something rash:

I'm interested in doing Highland Games. I want to put on some weight, but I have MMA classes three days a week, play in two basketball leagues, and I want to do a marathon. What lifts should I do to put on sixty pounds?"

I tell you, that's NOT an exaggeration. It's not. Learn to walk slowly. Learn to lay down. Learn to nap. I have argued my whole coaching career that the single hardest thing to do is do add quality lean muscle mass. Now, I didn't say "weight" as the people with the Big Gulps and doughnuts have bravely shown us the way: I said lean muscle mass.

One person in a hundred will have the courage to listen to my best piece of advice to prep for a mass building program: lean out first. My buddy in college who decided to enter an amateur bodybuilding contest lived for a month on nothing but lettuce and dope. Yes, you read that right, and no, don't try it. For his last workouts, his friends had to literally pull him off the floor to do anything. The loads on the bar were far, far below his normal training numbers. But under the lights, he looked marvelous.

A funny thing happened the weeks and months after the contest: the guy exploded. It was like he was being inflated. He gained size, in all the right places, seemingly every day. I know there's a scientific explanation for this, but I don't care. I found the same thing happened to me after the Velocity Diet. A week later, I lifted in an open Olympic lifting meet and everyone swore I had put on ten pounds of muscle, but I was actually two pounds lighter. If you have the courage to lean out, try it!

If you choose to lean out first, I've some good news for you: Creatine works. Try it for three weeks and really don't overload yourself with it. Take the recommended dose and don't get into the mindset (actually, it's the "mine-set" because I am the world's worst offender here – of "if a little is good, a lot is wonderful!" Coming off a period of leaning out, creatine seems to "supercharge" itself as you start eating normal and training hard.

An interesting observation, though; I've noticed that guys who just start stuffing creatine into their drinks without leaning out, or without any rhyme or reason to using the supplement, often get little back from it. So, if you are going to use it, think it through a bit. The lab-coats over at Biotest go through the trouble of printing a recommended dosing strategy on the label; follow it.

You need to up the workout intensity. In college, I became "famous," as the local radio and newspapers mention repeatedly, for drinking cold coffee and eating a grapefruit before competing. Two things: first, I didn't normally drink coffee, so I did get a bit of a buzz, and, two, I'd read somewhere that something in the grapefruit made the caffeine work better. There was probably some truth in that, but whatever it takes to get you going, take it!

I would suggest that you ingest whatever you think appropriate and there are many options at the Biotest store or at the local gas station to "give you a buzz." While you're waiting for this to kick in, I'd recommend that you do one more thing: write out EXACTLY what you hope to accomplish during the workout. If you're going to take 225 for a set of 25 Back Squats, and then rest and do another twenty, write it down.

If there has been one tiny simple change in my training that has helped me the most, it's writing down my plan for my training before I begin. Try it.

Do I have to write this out? Honestly? Ahem, here goes: are you taking fish oil? Because, if you're not, you have totally missed the last decade of research. Fish oil capsules are so inexpensive and work so well that I simply can't believe some people still don't take them.

How hard is it to pop a couple Flameout® capsules into your mouth and swallow them? Keep them in your desk, in the bathroom, in the kitchen or wherever you pass by every day. If there is a miracle supplement for both fat loss and muscle gain, this might be it. True, our ancient caveman hunter-gatherer brother and sisters didn't need fish oil as they ate the bone marrow and all the organs of an animal, but you do.

I thought Dick Notmeyer was crazy, and maybe so anyway, when he told me to stay warm when I was trying to get bigger. He suggested keeping a sweatshirt on at the gym and wear sweaters and jackets and not let myself get cold. This is old school advice, folks, but some of the research on shivering and brown fat might support this idea.

If your body is trying to let you get a little bigger, but you insist on shivering, freezing and shaking, the body is going to shift resources to producing heat. Maybe this is pure fluff, but it's simple enough to try.

Think of it this way: while those 142-pound geeks are walking around with their wife beater shirts, tribal tats and shaved arms, you can be like that Arnold guy who used to keep an air of mystery about him.

It might be worth the time and effort BEFORE embarking on a mass building program to take some time to master the squat. Years ago, I started teaching the Goblet Squat as a simple way for people to master the movement; it's now a standard teaching method in the Russian Kettlebell Certification and many other gyms use it's a basic workout tool. It's simple to learn.

Again, do I need to tell you to take more protein? If there was a single great lesson from my experience on the Velocity Diet, it was this: I don't get enough protein. I've read many arguments against this point, but my experience and my coaching have underscored this simple point. It can be in shakes, post workout drinks, meat, fish, more eggs or whatever, but get more protein! Please.

Some of you won't like this, but the last tool is a "Reality Check." It's true, under the direction of Dick Notmeyer and a lot of puberty, I put on forty pounds in four months. But I didn't put on much more for three years!

Mass building programs need to be done on a massive offensive. Line up the bombers and tanks and cannons and blast away! Then, move onto a basic program again. I think that six weeks of honest mass building can do wonders; I can't imagine trying for six years. Two to three times a year, throw yourself full on into a mass building program. Learn from each attempt and try to remember those lessons for next time. 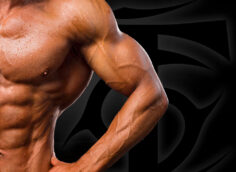 Abs aren't really made in the kitchen... unless that's where you train. You have to build them like any other muscle. Here's how.
Abs, Bodybuilding, Training
T Nation October 13