They say time heals all wounds, and no place is this more evident than in the world of strength and conditioning. Just a generation ago, any ideas emerging from the former Soviet Union were considered overly complicated, impractical, and likely "performance enhanced."

Our take on Russian training was a lot like Rocky 4.

While Ivan Drago was menacing, with his formidable skill, impeccable haircut, and limited vocabulary, everyone in the audience knew his steroid-enhanced butt would get pummeled into a bleeding, crying mess by a short, determined brawler from Philly armed with nothing more than a big heart and an equally limited grasp of the English language.

But today, Russian is the new cool. The tagline 'Soviet' or 'Eastern Bloc' excites the boys more than the vision of being the pastrami in a Sharapova-Kournikova sandwich. What next – our big-hearted brawler from Philly will become the poster-boy for steroids and HGH?

In the former USSR, timed sets were a big part of strength training culture, and thanks to the upswing in kettle bell sport, have come into popularity on our shores. However, working out 'by the clock' has been part of our methodology for many years.

Training methodologies like timed sets work by increasing work capacity. While not a magical recipe for world domination, it's still an interesting, practical method that works by altering the carrot on the string that we call short-term goals.

Old-time bodybuilder and weight lifter John Grimek reportedly did a workout of 200 presses with 200 pounds, although I have no idea how long that took him.

The numbers seem incredible because they're not commonplace. The men in the above examples are not too common, either. Perhaps they're gifted or simply work harder; I have a feeling it's a bit of both.

There are many ways to set up a progression system with this type of training, such as increasing the reps performed within the given time and increasing the load. You can also increase the time under load by gradually shortening the rest periods, until all the shorter sets become one longer set.

This routine will be based on three training days per week. Each day will have one base exercise with another to balance it out. If you plan to go out ballroom dancing after this workout, you should tell your partner to prepare for disappointment. This workout will tax you in ways you might not be used to.

Your first movement is seated presses.

While dumbbells can be used since they're found in most training centers, kettlebells might be a better choice since their design is based around timed sets and strength/endurance.

The model for this exercise is Michigan's own Ken Blackburn.

He's the American record holder in the seated press. He pressed two 32 kilo 'bells, 52 times in 10 minutes. His motion wasn't constant – he paced himself by resting "in the rack."

If you have to take a break, keep a wristwatch or stopwatch handy to keep accurate records. Time/Reps/Duration are to be recorded for every workout.

Observe the video carefully. Notice there's no back support here.

Lock out the elbows and avoid the advice of 1980s trainers of keeping constant tension. Go through a full range of motion to access as many muscle groups as possible.

Next you'll do close-grip supinated chin-ups. The traction will feel good after the seated presses. Attach a small weight to your waist for added resistance.

This is simple – just find a way to do 25 total repetitions. These can be organized in sets of 2 or 3 if necessary. When you can achieve a straight 5x5, raise the weight.

End the workout with two stretches:

Use a Safety Squat Bar or the Manta Ray apparatus. This moves safety up a notch. You can choose two variations in squatting, either regular back squats or the box squat.

You'll need ten minutes of squatting at roughly ten reps per minute. You can get there in a series of shorter sets with timed rests or using any pace you like. Choose your weight wisely since it's going to be a big part of your life for ten hellish minutes. Only add weight when you can manage those ten minutes with good form.

The second exercise is a variation of two torso exercises. It's done for five minutes. Get on your hands and knees, preferably on a soft surface. You'll do the Camel/Cat posture from Yoga for one minute. Move slowly and focus on your range of motion.

Here's a video of the Camel/Cat posture. No camels or cats were harmed in its making:

At the end of the minute, do a stomach vacuum. Exhale all the air in your lungs and draw your navel to your spine. The vacuum created by the lack of breath will make this easy.

Perform the stomach vacuum for about a minute, then return to the Camel/Cat. Repeat the sequence for five minutes.

Now go through your two stretches again and allow your body to unwind and relax. You should be thoroughly pumped and out of breath. The stretches will elongate tight muscles and create a relaxed balance.

With this exercise, plan on five minutes per side, but if you're feeling strong, don't be afraid to bump it to seven minutes per side. A small timer or even the countdown function of your sports watch is an inexpensive but valuable tool.

The timed set row is best done with your palm on the bench. Some trainees like their knee to be on the bench as well. It doesn't matter. When movement stalls, rest with your hand attached to the weight until you can continue.

Now the accessory exercise – the dip from a dead stop. Think of an upper body box squat.

To do these, place a box under the dipping station. You'll start the movement with your knees or feet on the box, depending on the height of the box. This serves two purposes: it limits the deepest range of motion on your shoulder joints, and it removes the tension gathered from the eccentric half of the exercise. You have to start with no elastic energy stored in the chest, shoulders, and triceps.

Again, you'll need extra weight and you should try to get 25 total reps. Add weight carefully since this is a new experience for many gym rats.

After a brief rest move to your two stretching exercises and hang out. The sheer volume of work will require some wind down time and unloading some tension is important.

Sometimes the most effective programs aren't the flashiest or have the most sinister-sounding, Soviet-inspired name. Of course, if following a training system so complex you need a PhD in Russian studies gets you more motivated to train, then simply change the name of this article to Gulag Periodization, my byline to Fyodor Nabokov, and go get busy. 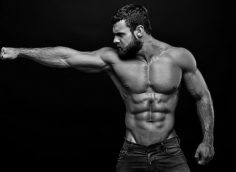 Balanced training is great for beginners, but not so much for the experienced lifter. Here's why.
Bodybuilding, Tips, Training
Tom MacCormick December 3

When you have knee or shoulder issues, this is a good alternative to a standard squat. This is the touch-and-go version with chains for overload at the top.
Bodybuilding, Exercise Coaching, Legs, Tips
Eirik Sandvik March 20

After getting bored of bodybuilding, one lifter transitioned into a highly-conditioned athlete. Here’s what he learned along the way.
Bodybuilding, Training
Jackson Yee October 20