Those who train mainly for aesthetics focus on calf growth of course, but it's far less common to see athletes working on their calves. And that's a shame because it could be what gives them an advantage.

Research on 1RM strength in a calf raise and sprint performance has shown significant correlations in for both absolute and relative strength (1). Researchers concluded that, "The dynamic maximum strength of the calves is a basic prerequisite for short sprints and should be regarded as a performance reserve."

These results come as no surprise given that ankle plantarflexion is involved in actions like sprinting, jumping, cutting, etc. So for athletes and those who want to perform well, calf training should be a no-brainer.

But if your mind goes straight to the traditional calf machines, you need an update. There are some powerful calf-strengtheners that you've got to add to your arsenal.

Performance-based training is all about transfer. You wouldn't want to invest a ton of time on an exercise where the benefits don't really transfer over to your sport. And training transfer comes from applying the principle of specificity.

The main issue with traditional calf raises is that you end up rolling more weight toward your pinky toes as you raise your heels.

Do a standing bodyweight calf raise right now and see for yourself. But that's not what actually happens when you're walking and running. As your back foot propels you forward, you roll more of your weight towards your big toe as you plantarflex.

So don't toss out your regular calf raises if you like them. They may offer potential performance benefits too. But for a more comprehensive approach, try adding these exercises below into the mix because they'll better replicate the way your foot presses into the ground when you walk or run.

This exercise combines a farmer's walk with a calf raise. Since it involves propelling yourself forward as well as upwards on each step, the plantarflexion action is more similar to that of walking and running.

I learned this exercise from strength coach, Ingrid Marcum. Start with your feet together and squeeze your ankle bones together as you perform calf raises. Trying to keep your ankles together as you raise your heels up prevents you from rolling your weight towards your pinky toes. It forces you to perform the plantar flexion action the way you would when you walk or run.

Aside from all of the other benefits heavy sled pushes offer, they're great for improving calf strength because they force you to go through ankle plantar flexion while keeping more weight onto your big toe.

Strength training requires improving your capability to produce force in a given movement. Whereas movement-speed training focuses on improving your rate of force development – that is, how quickly you can use your strength. Remember: power = strength × speed.

And that's where the pogo movement comes in. It's basically a jump performed through the action of the ankle and foot rather than the knees. If you do it right, it'll set your calves on fire. The goal is to move fast with these. They involve very light loads (your body), but they demand that you move at high speed by minimizing ground contact time.

But these are easy to mess up, so take a look. Here's what it should and shouldn't look like. Left is good. Right is bad.

This variation will place more emphasis on the lower body. Place your hands on your hips and repeatedly jump pogo style with minimal ground contact time. You should have minimal knee flexion (knees over toes) and be hitting the ground in a more dorsiflexed position. Generally, this drill should be more elastic and rhythmic in nature.

Double-Leg Pogo, Hands Behind the Head

This variation will place a greater demand on your trunk demand since there's a more upright emphasis. Place your hands behind your head and repeatedly jump pogo style. You may have slightly more knee flexion in this variation. But still focus on minimal ground contact time with a dorsiflexed foot position.

This variation allows for the most jump height and ties in total body coordination. Repeatedly jump pogo style but use an arm swing too as you hit the ground and propel upwards. The arm swing should be an aggressive pump working in concert elastically with the pogos. All other cues apply.

This variation will challenge rhythm and coordination.

Skipping Rope Side to Side

An added lateral challenge in addition to the above.

Skipping Rope Front and Back

An added linear challenge in addition to the above.

You can do all of these single legged as a progression, and to decrease potential left and right asymmetries.

This curl variation nails every fiber of the biceps in one movement. Check it out.
Arms, Bodybuilding, Tips, Training
Alexander Nurse Bey December 2

Forget the 45-minute warm-up routines - here's how to get set for your next squat or deadlifting session with just a few moves.
Mobility, Powerlifting & Strength, Training
Tim Henriques July 13 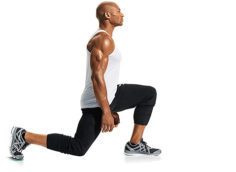 Fire up those quads, hamstrings, and glutes with this workout challenge you can do anywhere.
Challenge Training, Legs, Tips, Training
Paul Carter October 4