I fully understand why a lot of people think that wearing a mask to prevent spreading or catching a disease is stupid, especially when it comes to viruses. At first glance, wearing an ordinary cloth mask seems illogical. Viruses are infinitesimally small and expecting one to get “trapped” by the fibers in a mask seems far-fetched.

It’s like shooting a basketball into the Grand Canyon from an airplane and worrying about hitting the rim. Not bloody likely.

That may make sense, but maybe we have to look a little deeper than that. Viruses don’t sprout wings and fly out of your lungs into the atmosphere like vampire bats looking for their next long-necked victim. Instead, they’re coughed, sneezed, or breathed out of the respiratory tract in water or mucus droplets.

These water or snot Ubers then ferry the viruses into the air, where they form an aerosol cloud that, in the absence of a breeze or ventilation, could linger for 3 to 5 hours – one that hapless victims could walk through and become infected.

So while naked viruses are too small to be blocked by anything but the most sophisticated, medical-grade masks, mucus and water particles are generally not.

Furthermore, if you’re not wearing a mask, any sneezed or coughed-out droplets quickly evaporate and shrink, making it possible for the viruses to both travel farther and remain in the air longer.

The opposite is true if you wear a mask. The humid conditions that exist between your mouth and the mask prevent droplets from drying out, so much so that it takes about a hundred times longer for them to evaporate. That enables the size of the droplets to remain large and greatly increases the chance they’ll be trapped by the mask.

Regardless of whether you buy that line of reasoning or not, mask wearing is mandatory in most places, including gyms, so rather than debate it, let’s take a look at how wearing a mask affects exercise performance and see if we can find if that adorable kitty-face number you’re wearing during your squat workout contains a silver, antiseptic lining. 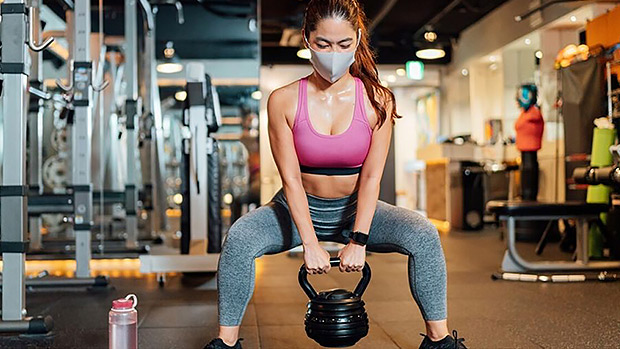 The Big Problem With Wearing a Mask in the Gym

Quite simply, masks make it harder to breathe, decreasing airflow to the lungs. As you work out, the mask becomes increasingly damp, which makes it ever harder to breathe. And, as you get more and more tired, you begin to mouth breathe, which gives the lungs less time to extract oxygen from the air than nasal breathing does.

Plenty of people try to give themselves some solace by thinking that wearing a mask while working out mimics altitude training, where athletes gradually reduce the amount of oxygen being breathed in by adjusting valves affixed to the mask. Over time, this improves oxygen efficiency.

Nice try, but it doesn’t work that way with masks intended to stop the spread of disease.

Altitude training requires, as stated, the reduction of oxygen. Wearing a plain old mask doesn’t change the proportion of oxygen in the air you’re breathing (20.93% at sea level); it just allows you to breathe in less of it.

How to Make the Best of It

The authors of a paper on the effects of mask wearing on physical performance (Santos-Silva, Greve, Pedrinelli, 2020) have suggested a possible benefit of wearing one while working out. They say that it makes the lungs work harder to obtain the same amount of air, thus potentially strengthening the lungs and diaphragm.

If and when seasoned mask wearers eventually forgo using their masks, so the argument goes, they’re actually more fit and could potentially do more work than they otherwise could.

Hey, at least that’s something.

In the meantime, until you adapt to wearing a mask, these same authors suggest you practice nasal breathing. It helps prevent “sauna face,” which is the accumulation of sweat, humidity, and probably tiny, naked Finnish people that can occur when you breathe through your mouth.

Nasal breathing also, as implied above, allows the lungs to extract more oxygen from the air because exhalation is slower. Of course, nasal breathing is pretty hard to keep up, especially when you’re doing heavy lifts, high reps, or metabolic conditioning of some sort.

In any event, regarding the pandemic, this too shall pass. Make the best of the situation for the time being.