Yes, get your diet in order or you’ll never have visible abs. Now that the completely obvious is out of the way, let’s talk ab training.

The average person will crash and burn before he ever reaches his goal of being able to take his shirt off in public without shaming himself. That’s because achieving the type of core definition doesn’t happen overnight. It also doesn’t happen through the frequent and dysfunctional spine-crunching exercises that your bros swear by.

Unfortunately, there are several debilitating, mainstream ab exercises that will lead you down a dark alley, kick the crap out of your body, and leave you with a growing gut in the process.

It’s time to save your midsection and replace the following atrocious ab exercises with intelligent alternatives.

The loaded, standing oblique crunch made its way onto this list for one reason – being way too easy to butcher and thus becoming a dangerous component of a core development program. 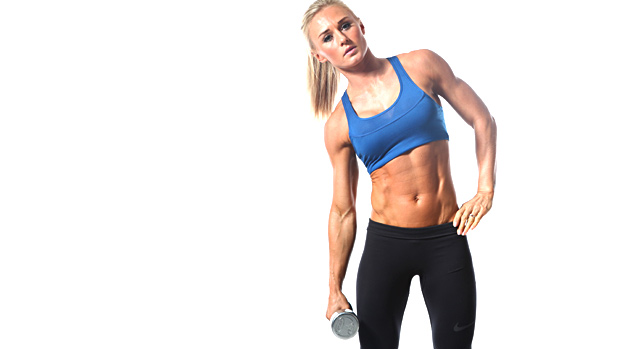 The average gym goer has no idea what neutral spine entails, let alone being able to execute an acute range of motion targeting deep abdominal musculature. Before we start loading up movements and working towards intervertebral disc trauma one ugly rep at a time, how about we first master the basics?

First things first. Make sure you’re unilaterally loaded, meaning you only have a weight in one hand, not both (as you’ve seen practiced at Planet Fitness).

Keeping your hips and knees in line with your spine, contract your core and turn on all the muscles that surround it to keep from slumping over to the side. Only when you can master this isolation hold using pristine mechanics and form do you dare to progress into a side crunch!

The tempo side-plank crunch can produce loads of tension without the actual load.

During the side plank, core muscles – including the obliques and transverse abdominis –turn on to stabilize the spine. The other primary stabilizer of this pillar, the gluteus medius, also activates to link the hips to the ab region.

Using a strong and maximally tensioned muscular contraction, own your side plank position for 20 seconds while squeezing maximally. After you earn the right to progress this movement, incorporate precise side-bending crunches with a slow descent of your bottom hip towards the ground and an explosive side bend back up into neutral.

Thanks to researchers like Stu McGill and other movement-based biomechanists, personal trainers and strength coaches across the world have become scared to fucking death to program a single crunch into any type of training session.

Uneducated and uninformed trainers far and wide are all of a sudden at a loss on how to produce ab-shredding results for their clients without their staple crunch, which in reality produced absolutely no results anyways. 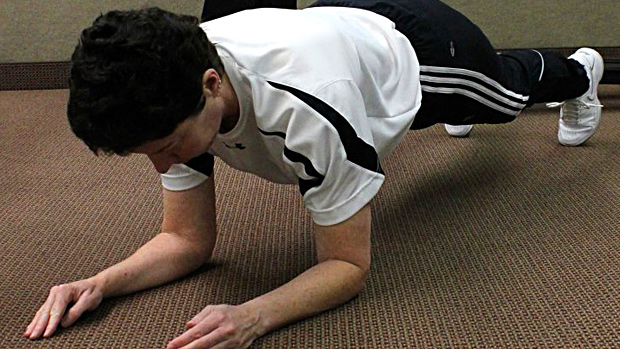 Enter the plank, the savior of the lower back, and the creator of just another smoke and mirror show.

The plank started out with noble intentions. I’m absolutely an advocate of minimizing shear stress on the structures of the lumbar region secondary to exercise, but I’m not in favor of producing lackluster results because of ignorance and fear.

The plank quickly became a movement (or lack thereof) that anyone could do with little to no mastery. Just put your elbows on the ground, straighten out, and hold it for 5 minutes at a time! And wow, in a matter of no time you would have a rock solid core that would save you from lower back pain and injury…

The primary problem with the traditional plank is the lack of deep core activation over an extended period of time.

Traditional planks are progressed by increasing the time of the hold, along with increasing the external load placed on the body. Extended sets can cause postural dysfunction and chronic anterior pelvic ligament trauma.

The core wasn’t meant to fire for extended periods of time in isolation. Rather, the deep and superficial muscles of the pillar need to have the ability to fire with maximal force repeatedly over time.

The RKC (Russian Kettlebell Challenge) plank can literally be programmed into any type of training session effectively. Depending on the movement or training emphasis of a specific session, the RKC plank can be programmed as a dynamic warm up or metabolic finisher.

Here’s how you do it:

It’s time to throw away the traditional plank, and upgrade your planks with a version that actually involves effort.

What epic gym session is complete without strapping your ankles to the decline bench and violently slamming your back against the pads until either your spine loses the ability to move or your hip flexors end up in a full-blown spasm? 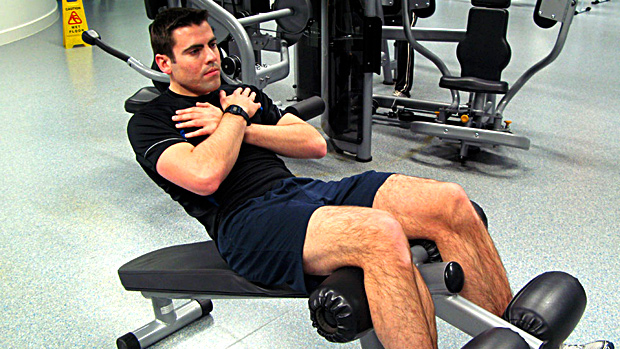 The decline sit-up has its merits for experienced trainees when executed with precision, tempo, and appropriate muscular activation. But as soon as ego and excessive front-sided loading get thrown into the equation, this effective old-school ab-training staple can quickly get ugly, leaving the average gym goer in a world of pain.

To the average person, the decline sit-up seems quite similar to the traditional horizontal sit-up: same muscle group, similar motion, and obviously the single best way to quickly get abs, duh!

But after breaking down the intricacies of both movements, they can be deceivingly dissimilar and potentially harmful when not treated as two separate exercises.

Where things get a little more complicated is when you look at the force and range of motion produced by the decline sit-up by increasing the decline-angle of the bench when compared to the flat sit-up.

Due to the downward angle of the bench, the moment arm of the motion becomes notably longer, which increases the unwanted and potentially debilitating shear forces through the mid to lower segments of the lumbar spine.

The angle of the bench also creates more available range of motion for the spine to move through while sitting up. More range of motion means more time spent in extreme ranges, especially excessive thoracic and lumbar flexion.

Forcing your spine repeatedly into end range flexion can potentially cause some structural and soft tissue damage to the posterior and lateral structures of the spine and trunk, leaving you hurting in the process.

The decline sit-up can be risky enough when using perfect mechanics, but the risks get out of hand when people mindlessly manipulate the following variables:

No matter what side of the sit-up argument you stand on, one thing is clear – too much of anything can be dangerous, especially when spinal health is involved.

If you’re going to continue to use the decline sit-up in your program, perfect your movement using controlled muscular contractions and maintain as close to neutral posture as possible. If you don’t, you’ll end up paying the price eventually.

The vertical plate press can target the abs to produce some serious results through the core.

It’s simple. Position the hips and knees at a 90-degree flexed position to eliminate involvement from the superficial hip flexors. Hold a weight plate directly in front of your chest with arms extended and press vertically under control.

The rectus abdominis muscle is a prime spinal flexor that runs from the bottom of the sternum to the pubic bone. Due to these anatomical landmarks, this muscle can still be highly active even when the spine stays in a relatively neutral position during the 90° vertical plate press.

The other key advantage to this movement is that it can be periodized and programmed for progressive overload. Over time, you’ll be able to stabilize and move more weight as your functional strength increases. Can the sit-up do that for you?

Don’t lie. You know you were glued to your TV watching the CrossFit Games marathon on ESPN like the rest of us couch athletes. 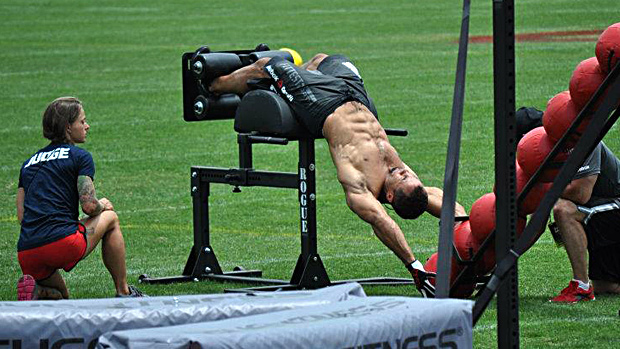 If that’s true, you saw what may be the greatest insult to spinal health in sport or fitness, and it’s called the GHD (glute-ham developer) ball toss.

As potentially debilitating as this event was, an international viewership of CrossFit disciples couldn’t get enough of that shit! I mean, who doesn’t become inspired after watching spines violently and repeatedly buckle into flexion and extension while tossing dinosaur eggs for maximal distance and time?

While the CrossFit HQ should have been ashamed of their risky programming and apologized to these world-class participants for putting their bodies directly in harm’s way, they decided to instead celebrate their TV ratings.

The final slap in the face was the immediate scheduling of the GHD back into the next two years of the CrossFit Games. No wonder many CF affiliates have had enough with Greg Glassman and his corporate gorilla marketing.

It’s not like he was ignorant of its damaging potential, either. In 2005, Glassman wrote an article in the CrossFit Journal regarding that GHD that concluded the following:

“We also caution against unbridled bouts on the GHD for newcomers… This is a potent exercise and it has sidelined dozens of strong, strong, athletes for a few days to a week.”

What makes this sadder is that Glassman was referring to only a slow and controlled sit-up on the GHD, and not a dynamic motion under load, time constraints, and absolute physical fatigue and deterioration, which is the normal metabolic environment while competing in the Games.

Glad to know Glassman stands by his words and puts his athletes second behind his corporate contracts.

While utilizing the same plane of dynamic arm action and movement as the GHD ball toss, the overhead med-ball slam provides a huge stimulus for maximal abdominal activation while functionally linking the core with the upper body.

This exercise can also minimize the damage to the lower back and pelvic regions by keeping the spine and hips within safe and functional ranges throughout the entire movement.

Just because we’re staying safe doesn’t mean you can’t take this exercise balls-to-the-wall! When executed properly, your entire pillar should be on fire with your abs experiencing a mean pump.

Oh yeah, and it will take you to a new PR in maximal heart rate, which can do you some favors in the form of fat loss.