When Biotest CEO Tim Patterson told me the new Surge® Workout Fuel is better than Plazma, I thought, "That's a big, bold claim that's a little hard to believe." But I've known Tim for 20 years, and his word is gold to me. So I was excited to learn more.

Tim said, "It's the best workout formula I've ever made, and not only that, it's 33% cheaper than Plazma. We've switched several of our athletes from Plazma to the new Surge® formula, and they're all seeing increased gains, faster recovery, and significantly greater work capacity."

Tim added, "Each Surge® serving contains 5 grams of L-leucine, 270% more than Plazma, plus it provides two additional power ingredients not in Plazma: 2 grams of beta-alanine and 1.5 grams of malic acid. The formula is so loaded with science-backed ingredients that there's nothing you could add to make it better.

"And, Christian, I want you to be the next one to test it. I consider you the most qualified to compare the formulas and evaluate which one performs the best. And I want you to go public with your verdict, regardless of the outcome."

Despite the enormous task and responsibility, I was excited to get my hands on the new Surge® formula. So I sent a copy of the label to my diet coach to let him know I'm making the change. He immediately texted me, saying, "That's a perfect workout supplement."

Here Are My Test Results

I've been using the new Surge® formula for five workouts and can make the following observations:

I've been a longtime Plazma user, so I believe I'm qualified to compare it to the new Surge® formula. Plus, I know Tim Patterson wants my honest feedback, either way. So here's my objective assessment:

Surge® Workout Fuel demonstrably outperforms Plazma, and it should be evident to anyone who uses both supplements. It makes such an improvement in performance and gains, I won't train without it — and neither should anyone serious about lifting or competing in sports.

Regardless of your fitness goals, I believe Surge® Workout Fuel will get you there faster and take you farther. And it outperforms Plazma at 33% less cost.

I'm also developing new training methods to take advantage of the surge effect. So sign up for the T Nation newsletters for update notifications. 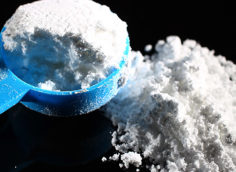