I used to work for the company that first popularized creatine. This was in the mid-1990's when humans lived in mud huts and watched movies on their primitive "video cassette recorders."

We sold teeny-tiny 150-gram bottles of creatine – about a 30-day's supply – for around 70 dollars. That's like four thousand dollars and a brick of gold in today's money, so yeah, it was pretty damn expensive when it first hit the market. (Today you can buy 800 grams of quality creatine for about 18 bucks.)

The owner of the company bought a Lamborghini. Then he bought a second one in a different color. I think he bought the country of Canada, too.

Pretty soon, dozens of companies were selling every type of creatine in every form imaginable. You could even buy brightly-colored creatine gummy bears. Manufacturers started dumping it in every formulation and it got to be that creatine was just another added ingredient in dozens, if not hundreds, of bodybuilding supplements.

The Forgotten Creatine In Your Cupboard

After a while, users gave creatine little mind. Add to that the fact that the creatine in those products was often under-dosed or inferior and consequently of little effect, and you had the perfect recipe for forgetting about the supplement or having a ho-hum attitude towards it.

Besides, when you take something for a long time, you forget what it did for you and eventually, the product is often unjustly relegated to the pantry of dead or forgotten supplements that can be found in any lifter's kitchen, guarded by suspiciously large silverfish.

Creatine, however, remains an incredibly effective supplement and lifters who start using it again are uniformly surprised to see that it'll often work just as well in packing on the pounds as it did the very first time.

The Best Way To Load Creatine

If you recall, creatine works best after it's been "loaded." That means that you need to repeatedly force-feed creatine into your cells until you achieve a consistent and maximal or supramaximal amount.

The advice on how to load first laid out by creatine pioneer Richard Kreider still holds up:

The Best Time to Take Creatine

Conventional wisdom dictates that you can just take creatine before a workout. After all, we take caffeine before a boring lecture, not after. It's the same with most drugs or supplements. However, scientists at Nova Southeastern University in Florida wanted to see if that strategy was actually the best.

Regardless, anyone who's still not taking creatine (and using it after a workout) is a dope. Pull it out of the pantry or buy a fresh tub and re-load. Not many supplements give such quick and indisputable results.

Fuel up and take on the day. Make a batch of these apple spice cookies. Get the easy recipe here.
Feeding the Ideal Body, Nutrition & Supplements, Protein, Recipes, Tips
Chris Shugart March 27 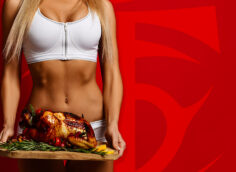