How many of these sound like you? At least once a week...

According to psychologists and eating disorder experts, if several of those make you say, "Yep, that's me!" then you may have BED or Binge Eating Disorder. And you're not alone, BED is now the most common form of disordered eating, surpassing anorexia and bulimia.

Most people with BED are fat, as you'd expect, but not all of them. You can have a binge eating problem and look pretty much okay on the outside (aside from maybe a puffy face).

The stress, the urges, the oddball behaviors, the feeling of being out of control, and the emotional ramifications are the same for "fit" people with BED.

I Don't Have a Problem, Dammit!

Now, if you're a bodybuilder, CrossFitter, or just a fitness junkie, you may be thinking, "Hey, I do a lot of those things, but I don't have an eating disorder!"

You may be right, but you have to agree that many of our nutritional practices edge into the gray area. The coveted cheat meal, for example. Very low-carb diets, intermittent fasting, the meat-only diet fad, veganism, planned diet stages where we "bulk" on purpose then strictly diet, etc. You get the idea.

(And yes, a competitive bodybuilder alternates periods of overeating and under-eating – off season and during season – but no one has ever mistaken a bodybuilder's yo-yo diet as "healthy." And besides, most of us don't actually compete.)

All of these dietary practices can be slippery slopes. A gut-splitting cheat meal once a week, after days of restricted eating, followed by guilt and new food restrictions for a few days after? Punishing yourself or "making up for it" the next day by training extra hard or long? (That's called a compensatory behavior.) That's pretty much textbook BED behavior.

The experts say these behaviors go from gray area to BED when they start to interfere with your normal life. You eat alone or in secret, you avoid eating out with friends and family, you feel terrible about yourself most days, etc.

After reading this, how do you feel? Is it...

Is it "B?" Generally, if you get that riled up about something, it's because it struck an off-key chord with you. Your over-the-top defensiveness could also be a sign that you have a potential problem. 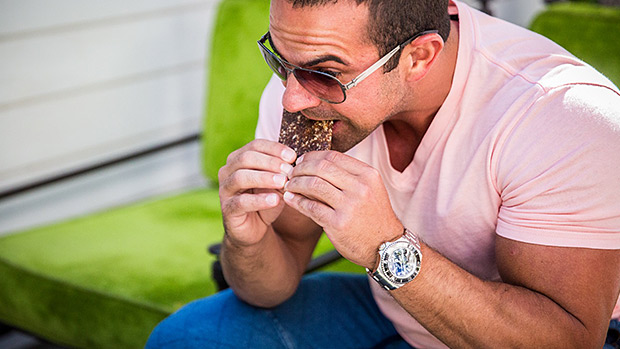 If you think you have BED – or might be straddling the line – a new study may help you out.

Researchers have known for a while that stress is a key determinant of binge eating. Likewise, Rhodiola rosea is known to modulate stress responses. So the researchers decided to freak out some rats and give them the popular adaptogen. (Adaptogens help the body adapt to – and resist – stress.)

First, the scientists gave the rats an eating disorder by overfeeding them highly palatable food for 4 days then putting them on strict diets for 4 days. They cycled through both feeding patterns for 8 weeks until the rats showed signs of BED.

Then they exposed the rats to stress, which triggered binge eating. Here's what happened:

The Rhodiola also abolished the stress-induced increase in serum corticosterone levels. It appeared to be the salidroside component of Rhodiola rosea that contributed to this reduction and abolishment, respectively.

Athletes have been using Rhodiola during times of increased physical demands to manage fatigue and enhance their ability to recover from intense training. Now it looks like the herb has potential too for those with binge eating issues.

If you think BED could be a problem for you, and you notice that it's triggered by stress, do a cycle of Rhodiola. Choose one method:

Now, most store-bought Rhodiola is mis-dosed or under-dosed, so be sure to use Biotest Rhodiola, the most potent and pure extract available.

Of course, if you think you have full-blown BED, then seek professional help as well.

There are two long-term solutions to yo-yo dieting and bad eating habits, but not many people want to hear them. Too bad.
Losing Fat, Nutrition & Supplements, Tips
Chris Shugart October 15

Disregard the quick-fix advice that most women's magazines are pedaling these days. Zero in on the big habitual blunders.
Feeding the Ideal Body, Nutrition & Supplements, Tips
Dani Shugart April 18