I demand a lot of things from my Monday through Friday breakfast. Weekends are of course for bacon, eggs, and flapjacks. After all, I'm no purist. But during the week? I want tons of protein. I want scads of polyphenols. I want a wheelbarrow of fiber so I can poop like a police horse (not while walking or anything – that's disgusting. I meant, you know, with regularity).

I also want cognitive enhancement, along with a vehicle for certain supplements and nutrients. Lastly, some flavor is nice.

I've been making a breakfast that provides all those things for years and I never really thought of it as anything I needed to share, but invariably, when an overnight guest sees me making it, they almost always say, "Hey, that's a pretty good idea."

So it's with the hope that you'll also think it's a pretty good idea that I offer up the ingredients to my perfect, multi-purpose breakfast.

That's a no brainer, but not the crap stuff that's sold everywhere, but a nice whey isolate/micellar casein blend like Metabolic Drive® Protein because micellar casein is the only protein that's been shown to be anti-catabolic (Boire, 1997). That means not only does it increase protein synthesis, it helps prevent muscle breakdown during and after intense exercise. Two scoops (about 40 grams of protein) does the job. I use vanilla because it marries well with almost all flavors.

Mixing creatine up in a glass and gagging it down is for losers. Just mix a scoop in your cereal and forget about it; the rest of the ingredients will mask its alkaline taste.

I use niacin as a bulwark against eventual heart disease. I just pull apart the capsule and dump the contents into the bowl. As I wrote in Take This Forgotten Vitamin for Heart Health, niacin does more to positively affect the lipid profile than any supplement, and it's also matched up quite well against statins, but without any of the negative side effects (except for flushing, to which I say, suck it up, poodle boy).

Not everybody sees the need for niacin, of course, but my overriding point is that you can mix any of a large assortment of powdered nutrients and supplements into your breakfast mixture. Magnesium? Throw it in. A lot of things work.

Personally, I'm doing a long-term experiment with para amino benzoic acid. A study I found from 1941 says it prevents (or even reverses) the graying of hair. I just add it to my breakfast mixture. Only time will tell if it works.

Just two scoops of this powdered fruit/vegetable blend has the antioxidant equivalent of 10 to 12 average-sized servings of whole fruits and vegetables.

More importantly to me, at least, is that Superfood contains an incalculable variety of polyphenols and carotenoids, which are the true miracle workers when it comes to health.

I'm not an astronaut traveling to Mars who subsists on nothing but powders, so I need to add some whole food to my breakfast. The easiest and tastiest way to do that is by adding frozen or dried fruits, all of which are available in huge horse-feed sized sacks from CostCo.

I choose blueberries, pineapples, and cranberries because they're all a different color, revealing in the most straight-forward way that each contain differing amounts of different carotenoids, but any combo will do nicely. 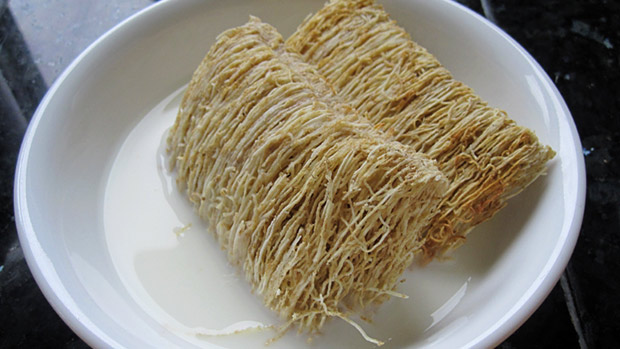 While I repeatedly tell people to avoid foods that come in boxes, Shredded Wheat is a rare exception because it's made from just two ingredients – whole grain wheat and wheat bran. It's got no added sugars and one serving contains enough fiber (8 grams) to regulate Godzilla's digestive tract.

You can, of course, make my multi-purpose breakfast without Shredded Wheat, but I use it mostly to add some filler and make my breakfast stick with me. Oddly enough, though, I suspect this is probably the most controversial ingredient in my breakfast, as untold millions have come out against wheat because of the gluten, alleged nutrient deficiencies in general, and phytates.

However, I'm not gluten insensitive or intolerant and I think wheat has some nutritional merit. While I acknowledge it contains some phytates, I'm not overly worried about it and I take zinc later on to negate the most pressing phytate concerns.

But you probably don't need to include the cereal. The protein powder, fruits, and walnut milk (described next) are filling enough.

I make my own milk from almonds or walnuts. I wrote how to do it in Make Your Own Almond Milk. (Just substitute walnuts for almonds in the recipe to make walnut milk. You can also use a tablespoon of Splenda instead of agave.)

It's incredibly nutritive and supplies some vital fatty acids. Still, it might be too much work for most of you. Feel free to use whole or low-fat milk instead.

Forget what the internet gurus are telling you. These supposedly “healthy” foods are anything but!
Dietary Myth Busting, Feeding the Ideal Body, Nutrition & Supplements
Brian St Pierre November 30
There are a lot of facts bombarding our gray matter nowadays. Pretty much everyone realizes that we live in an age of information overload.
Diet Strategy, Feeding the Ideal Body, Nutrition & Supplements
Lonnie Lowery, PhD December 14