Being lean, really lean, is usually a transient state as all severely restrictive diets eventually come to an end. On one hand, the end of a diet is good. You get to laugh deliriously as ice cream dribbles down your chin. Plus, it gets easier to put on muscle.

But the bad side is that your V-taper starts to soften, blur, and spread out until it’s kind of a U-taper, which really isn’t a taper at all.

Recent research, though, suggests that taking curcumin after a calorie-restriction diet is over might limit the amount of fat you regain, even if for some reason you stop training, too.

This was a rat study and before you say anything, rat studies are just fine, thank you. Their physiology is similar to ours and you can carefully monitor their every waking and sleeping moment because they live in cages with wheels and are housed in scientific institutions.

You can’t do that stuff with humans. They’d object. And they’d probably turn their noses up at the exercise wheel and insist on one of those stupid, over-priced Peloton bikes where some virtual coach who’s likely impotent from riding so much browbeats you to pedal faster.

Anyhow, scientists took rats and split them into two groups. One group was on a calorie restriction diet and had 24-hour access to one of those rat-iconic running wheels. The other group didn’t have a wheel and they got to eat as much as they wanted.

After 3 weeks, the trained rats were divided into three groups. The first group was terminated immediately and the second and third groups had their running wheels locked and were reintroduced to ad libitum (as much as they want) feeding for a week.

Additionally, one of these groups received a daily gavage (force feeding) of curcumin (200 mg/kg) while the other group received placebo.

When the rats no longer got to exercise and were given as much as they wanted to eat, body mass naturally increased, accompanied by a 9 to 14-fold increase in epdidymal, perirneal, and inguinal adipose tissue. In other words, they got tubby in all the places one doesn’t want to get tubby in, but all of these increases were attenuated in the curcumin group.

Furthermore, the curcumin-fed rats had a much more favorable insulin curve and much lower C-reactive protein (a measure of inflammation) than the non-curucmin group.

The researchers concluded that,

“…results indicate the curcumin has a protective effect against weight regain and impaired metabolic control following a successful period of weight loss through diet and exercise, perhaps via inhibition of glucocorticoid action and inflammation.” 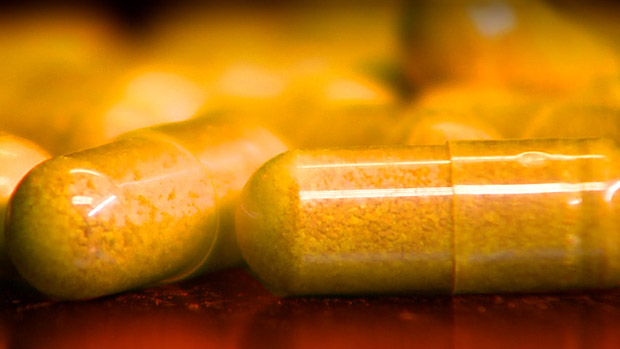 Most people, upon cessation of a diet, probably don’t abruptly revert back to previous bad eating habits. Instead, they’d gradually relax their previously Spartan diet and slowly start to put the pounds back on until they woke up one morning and found that they’re not just pudgy again, but have a renewed sense of self-loathing.

Even so, there’s ample reason to think that curcumin would work equally well in preventing post-diet fat gain in humans. Of course, the human evidence on this particular aspect of curcumin is largely unexplored, but empirically speaking at least, curcumin does seem to keep the pounds at bay.

One eyebrow-raising aspect of the rat study was the amount of curcumin administered. The dosage was 200 mg/kg, which translates to 18,000 mg. for a 200-pound person. That’s about thirty-six 500-mg. capsules per day.

An amount that large would cause your tears, sweat, urine, and feces to be colored a kind of initially pleasing but ultimately frightening Day-Glo orange. Don’t freak out, though. There’s an easy solution.

Plain old unadulterated curcumin is notoriously hard to absorb for rats and humans alike, so the researchers had to overdose the rats to ensure they got a therapeutic dosage. If the researchers had used micellar curcumin, they could have greatly increased absorption and bioavailability, thus negating the need for such humungous doses.

For example, the Biotest’s Micellar Curcumin™ formula contains solid lipid curcumin particles that produce 95 times more free curcumin in the bloodstream than highly pure, standardized curcumin. You don’t need piperine and you’d only have to take a one capsule a day. 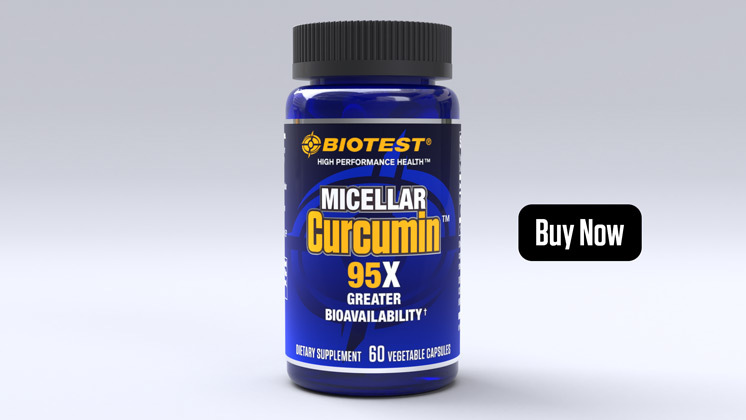