Ultraviolet (UV) light ages the skin on your face so you start to look like the guy who feeds the pigeons down by the lake every morning. Worse yet, all that UV light sets the stage for skin cancer.

Fortunately, there's something you can do to save your skin and it doesn't involve slathering zinc oxide all over your face so that you're mistaken for an abnormally muscular Geisha girl.

Scientists have long suspected that fish oil might have a mitigating effect on the damaging effects of sunlight. To put it to the test, a team of researchers from England recruited 40 light-skinned people, average age 44, for an experiment. Each subject had a small piece of their skin subjected to UV radiation.

The researchers recorded the intensity at which each skin sample started to burn. The lower the intensity required, the more sensitive the skin sample was to sunlight, and presumably the more vulnerable it was to premature aging and skin cancer.

Half the group was given 4 grams of the omega-3 fatty acid EPA (eicosapentaenoic acid), which is commonly found in fish oil and in lesser amounts in a relatively small group of other foods. The other 20 test subjects were given oleic acid, the predominant fatty acid found in olive oil.

After three months, the scientists repeated the skin sample test. The people who had been taking fish oil required a lot more UV light to start burning. Furthermore, the people who used olive oil instead of fish oil exhibited a lot more activity from a particular gene involved in the repair of sun-damaged DNA.

If the p53 gene has been activated, it's a definitive sign that skin has been damaged, so in this case, the higher activation of the gene shows that the people taking olive oil had suffered a lot more damage than the fish oil group. (That doesn't mean that olive oil causes you to burn faster, though. It just means that olive oil didn't convey any protective effect to the skin.)

The researchers at the time didn't know how fish oil exerts this protective effect, but another group of scientists writing in 2006 theorized that fish oil protects animal skin from UV light by reducing plasma and cutaneous pro-inflammatory and immunosuppressive PGE2 (a type of prostaglandin, which are chemicals that have hormone-like effects), whereas omega-6 fatty acids increase levels of PGE2.

In other words, omega-3 fatty acids from fish oil or other sources inhibit UV carcinogenic expression.

A little direct sunlight is good. Some experts recommend that pasty people get 10 minutes of direct sunlight between the hours of 10 AM and 3 PM (when the sun's rays are the strongest) three times a week to produce natural vitamin D. Darker skinned people are advised to do the same thing, albeit for 30 minutes at a time.

Any more than that likely causes some degree of skin damage. Of course, exposing yourself to the sun for only 10 to 30 minutes is a lifestyle more suited to nuns, monks, and mole people. If you don't fall into one of those categories, you likely need to give yourself a little skin insurance.

Get about 4 grams of EPA a day, either by eating 1.5 pounds of wild salmon every day (kind of improbable), or by taking 4 capsule of molecularly distilled fish oil like Flameout®. 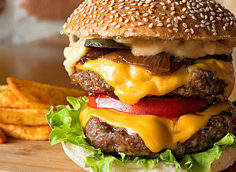 Does having a big sloppy meal kill your diet? Exactly how much fat do you gain when eat more than you should? Answers here.
Diet Strategy, Dietary Myth Busting, Feeding the Ideal Body, Nutrition & Supplements, Tips
TC Luoma March 23
"The aim of the legal action is to force the fast-food industry to "offer a larger variety to the consumers, including non-meat vegetarian, less grams of fat, and a reduction of size of their meals."
Feeding the Ideal Body, Nutrition & Supplements
Lonnie Lowery, PhD August 9