Up until a few years ago, vitamin B3 or niacin was one of two supplements (the other being fish oil) widely recommended for heart health. Fat hearts, skinny hearts, hearts that climb on rocks... Grinch hearts, clogged hearts, even hearts with a COX-2 inhibitor-induced increase in cardiovascular disease liked niacin.

But then along came the cholesterol-lowering statins. (The whole issue of the dangers of cholesterol is still in general a hot mess, but that's a story for another day.) At first, doctors recommended people take statins and niacin together, but then a couple of studies showed that statin therapy did just fine on its own, sniff, and it didn't need the help of niacin.

So niacin, dejected, sulked to the back of the supplement cabinet. Ironically, she couldn't mend her own broken heart until a new research paper came out in Clinical Lipidology and gave her CPR.

The paper said that not only did niacin do more to positively affect the lipid profile than any supplement, it also matched up quite well against statins, but without any of the negative side effects.

More importantly, though, it appears that niacin is one of the two known things – the other being a $14,000 a year medicine – that can combat something called lipoprotein(a), an almost ignored lipoprotein that hardly any doctors test for and is thought to triple the risks of having a heart attack at an early age.

Lipoprotein(a) is a scary player in heart health. Up to 1 in 5 Americans has, according to the New York Times, "perilously high levels of it in their blood."

While doctors routinely test for other more commonly known lipoproteins like HDL and LDL cholesterol, few physicians even know about lipoprotein(a). Hell, we don't even know exactly what it does. What we do know, though, is that it really increases the risk for stroke or heart attack.

To make matters worse, diet and exercise have almost no effect on it. High levels of lipoprotein(a) may turn out to be the reason why so many men and women who eat well, exercise right, have "good" cholesterol numbers, and appear otherwise healthy, drop embarrassingly dead after bragging about what good shape they're in.

Niacin, though, has been shown to lower levels of lipoprotein(a), along with doing a bunch of heart-healthy things as well as, or better than statins.

Other Heart Reasons to Take Niacin

Whether you want to use niacin depends on a few factors. For instance, if your doc already has you on statins, you might want to ask him, while brandishing a copy of the paper referenced below, about adding niacin to your regimen.

You should also think strongly about using niacin if you test high for lipoprotein(a). Remember though, that most docs either don't know about it or just plain don't test for it, so have him or her add it to your lab request sheet.

Lastly, anyone over the age of 40 might consider adding niacin to their daily supplement intake just as an insurance policy.

How to Use Niacin

Niacin comes in several forms. There are immediate-release forms and extended release forms, the latter using "wax matrix" or polygel delivery systems to slow down absorption.

Now here's the rub. A lot of people don't like niacin because it can cause a surge of skin-flushing prostaglandins in sensitive individuals, which can also cause a short-lived prickly feeling all over your body. That's why many people opt for the ER formula, which lessens or negates the side effects considerably.

However, studies suggest that the immediate release formula might work better in the long run, and if you take it with meals, you shouldn't have any flushing or feeling of angry ants crawling on your skin.

For regular Joes who are just looking for some heart insurance, consider taking one 500 mg. immediate-release tablet with breakfast and another with dinner. 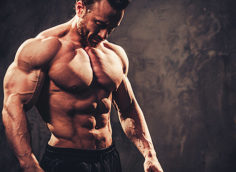 Is there really a link between sodium and hypertension? Here are the facts.
Dietary Myth Busting, Feeding the Ideal Body, Nutrition & Supplements, Tips
TC Luoma March 3