In the early days, fish oil supplementation was crude. You couldn't get the high doses needed without suffering the unwelcoming side effects: fishy taste, heartburn, diarrhea, and fish farts. (1)

The purification process for fish oil supplements began to advance as the demand for high-quality products grew. Today you can easily get your hands on the good stuff, but sadly, the shelves of your local discount retailer are still lined with fish oils containing impurities.

Reliant Pharmaceuticals saw the need for "pharmaceutical grade" fish oil and began to devise a way to make a fish oil product that was +80% EPA/DHA compared to the 30% EPA/DHA that you'd find at the discount retailer. (2, 3) They were able to achieve this through a patented purification process, which housed EPA and DHA as ethyl esters instead of triglycerides.

Now, the triglyceride form is how EPA and DHA are normally found, with three fatty acids connected by a common "backbone."

In Big Pharma's ethyl ester form, EPA and DHA exist individually and not in the naturally occurring triglyceride structure.

Are they? Does your body process the omega-3 ethyl esters differently than it would if you ate a piece of salmon or took some Flameout™? If so, do these differences warrant an omega-3 ethyl ester price tag upwards of $200 a month?

Molecularly-distilled fish oil products, like Flameout™, have impurities removed. The World Health Organization's standard for dioxins is less than two parts per million.

A molecularly-distilled fish oil product can contain as little as 0.3 parts per million dioxins. Would the 85% pure omega-3 ethyl ester product contain less? Probably. Is this difference going to impact your health? Probably not.

So from a contamination standpoint, molecularly-distilled fish oil supplements and omega-3 ethyl esters stack up about the same. How does your body treat them? Up until this year there wasn't that much research to answer this question.

Two studies now point to a difference in bioavailability.

The first study, published in the journal of Prostaglandins, Leukotrienes and Essential Fatty Acids (or what I like to call "light bedtime reading") examined the bioavailability differences between fish oil supplements, including omega-3 ethyl esters. (3)

Researchers found the bioavailability of the omega-3 ethyl esters was -27% compared to the control fish oil (which was basically the equivalent of squeezing the EPA and DHA out of a salmon filet).

The European Journal of Clinical Nutrition published a study last month with twice as many subjects as the first one. (5) During the six-month time span, researchers gave subjects either a high-quality fish oil supplement – in the naturally occurring triglyceride form – or an omega-3 ethyl ester.

The researchers found at months three and six that those receiving the high-quality triglyceride fish oil supplement had a much higher omega-3 index at both time points. Sorry, ethyl esters.

Just because a product requires a prescription doesn't mean it's better or more effective. 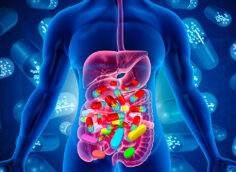