As a biohacker, I use drugs, supplements, and functional foods to augment longevity, sesthetics, and athletic performance. As you might expect, my medicine cabinet and pantries are full of stuff that would dizzy a sorcerer or alchemist.

But I know that most people aren't interested in being a walking lab experiment. Likewise, most of them are probably squeamish about having green urine and blue feces, but hey, to each their own. I'm kidding. Sort of.

Anyhow, the vast majority of regular folk want to keep it simple. They want basic supplements that stand a very good chance of improving their health. Hence this short list of essential health supplements.

You won't find any multivitamins here – the dosages, combinations, and possible interactions are all too complex and science doesn't have a good grip on them yet, but the following stuff has born the scrutiny of a lot of science.

Despite its rep as a muscle and strength builder, creatine is an amazing supplement that has lots of health applications for ordinary folk.

It helps mitochondria produce ATP so that you have more energy and have better heart function. It's been shown to lower blood sugar, increase the formation of osteoblasts, treat fatty livers, aid with fibromyalgia, stop muscle loss in old coots, and in general, possibly help you live longer.

While there are plenty of "loading" schemes, the simplest way to incorporate creatine is to just take 5 grams a day, every day. After 30 days, you can reduce the dosage to 3 grams and then continue with that dosage until you get super old and people start talking to you really loudly and always in the third person ("How are we doing today? Are we feeling hungry?"). At that point, stop with the creatine and pray for the sweet release of death.

Make sure you use a micronized version where the grains are absorbed better than versions from the big box stores.

A really weird thing pops out at you if you start looking at epidemiological studies pertaining to mortality rates from health conditions like cancer, cardiovascular disease, and diabetes.

The farther you get from the equator, the higher the mortality rate from these diseases. Likewise, the survival rate of patients with the aforementioned diseases increases if the diagnosis was made in the summer months.

The answer seems clear; increased distance from the equator, along with winter, equate to decreased exposure to sunlight, particularly the UV-B radiation that's needed for the synthesis of Vitamin D, a vital component of the immune system.

But beyond that, there are scads of studies that support vitamin D's role in a host of health things, from more orgasms to more muscle, less fat, and increased athletic performance.

So yeah, you need adequate levels of vitamin D (blood levels above 50 ng/ml – up to about 75 or even more), but again, you're not going to know what they are without a blood test. However, for the vast majority of people, taking 5,000 IU of vitamin D3 (the best absorbed form) a day will more than do the job.

The National Health and Nutrition Examination Survey (NHANES) reports that 61% of Americans are deficient in magnesium, and that percentage is even higher among athletes because a lot of it's lost through sweat.

This is bad news because magnesium plays a role in over 300 biochemical reactions in the human body. It's crucial to energy production, protein synthesis, and insulin metabolism. A lack of it results in poor athletic performance, undue lactic acid buildup, muscle cramping, difficulty in losing fat, poor recovery, and even twitchy-heart arrhythmias.

Intake is also inversely related to arterial calcification. Adequate levels of magnesium keep calcium dissolved in the blood so that it can't "turn to rock" in your veins and arteries (or your kidneys, either, thus helping to prevent kidney stones).

And, according to a Turkish study, combining magnesium supplementation with intense exercise can increase testosterone levels by a stratospheric 25%.

Given the prevalence of deficiencies, supplementation seems in order. While the RDA is only 400-420 mg/day for men and 310 to 320 mg/day for women, athletes may want to double up.

There have been over 2,000 studies where curcumin's been shown to be a potent warrior against cancers of the prostate, breast, liver, colon, lung, and pancreas to name a few.

It's also been shown to fight erectile dysfunction, prevent malaria, increase athletic performance, and almost anything else health-related you can imagine. And since it's such a powerful anti-inflammatory, it does a bang-up job as a pain reliever for achy knees and joints in general.

Unfortunately, the body doesn't absorb curcumin very well. Simply ingesting it as a main constituent of curry powder, regardless of the amount eaten, isn't going to have much of an effect.

As such, you need to ingest curcumin as part of a formula that contains the chemical piperine, which enhances absorption by up to 2000 percent.

We live in an omega-6 world and it's killing us. Nature intended for us to have a two-to-one or three-to-one ratio of omega-6 to omega-3 fatty acids in our body, but because of our fast-food, snack-food, meal-in-a-box way of life, this ratio is now more like 20 to 1 in favor of the omega-6s.

Inflammation is thus running rampant through our bodies and the best way to stop it is to cut down on the omega-6 and to start swallowing those beautiful, amber fish oil gel caps. Take up to 5,000 milligrams of a combined DHA/EPA formulation like Flameout® a day.

Every once in a while, I'll run into someone with a new idea about how to train or eat that's so contradictory to everything I think I know that I'll want to close my eyes, plug my ears, and bury my head in the pillow so I don't have to listen. After all, I'm just getting comfortable with what I think I know. I don't like having my world shaken up any more than necessary.
Feeding the Ideal Body, Nutrition & Supplements
TC Luoma August 6 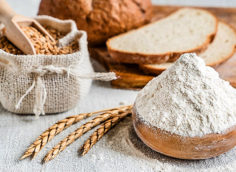