As you might imagine, almost every secret, or even not-so-secret club, gang, pack, or gaggle has a manifesto, a document detailing all the important information that every devotee should possess. The Christian club has the Bible, the US gang has got the Constitution and the Bill of Rights, and even that Bill Phillips, Body For Life pack has a glossy, estrogen- soaked manual that describes how to place your lips directly onto Bill Phillips' butt while sliding your hard earned dollars into the front pockets of his freshly pressed chinos.

This makes me wonder what the world would be like if there were a Book of T, The Word of Testosterone, if you will? Perhaps a book like this might, in some small way, negate the damage caused by years of indelibly stamped images of Richard Simmons's flabby thighs in spandex. Perhaps it might also help erase years of erroneous fitness mythology from the memory centers of fitness trainers and exercisers alike.

If such a book were to be written, I might expect that every full-fledged, card-carrying member of T-Nation would have a copy and this holy book would provide information essential to all T-Nation members. Hence this hypothetical introductory chapter, my vision of what the members of Testosterone Nation should know about their namesake.

Part 1 of this three-part series discussed steroid fundamentals, while part 2 discussed how they're used. This final installment addresses the legal concerns.

Legal, Illegal, Am I Going To Jail?

Since steroids are often sold in locker rooms around the country without a second thought and since the status of steroids has changed over the years, many individuals have no idea as to the true legal status of the drugs or the implications of being caught dispensing or possessing them. If you're gonna play the game, at least know the rules.

Before 1988, steroids were classified as mere prescription drugs by the FDA (Food and Drug Administration). The job of the FDA is to determine which drugs will be classisified as over-the-counter and which will be available only through prescription. In addition, during this time, the Federal Food, Drug, and Cosmetic Act, an act designed to restrict the access of certain drugs to those with "legitimate" medical uses (i.e. with a prescription) by categorizing drugs, determined that steroids could only be distributed with a prescription.

Importantly though, at this time, steroids were not classified as "controlled substances" by the Controlled Substances Act. "Controlled substances" are substances that are more tightly regulated than "uncontrolled" prescription drugs. With tighter control comes a longer paper trail, more intense scrutiny of doctors prescribing these drugs, and more severe penalties associated with illegal dispensation and use.

By the early 80's, due to more frequent reports of steroid use in athletes, especially young athletes, policy makers began to discuss elevating steroids to "controlled" status. Finally, in 1988, the Anti-Drug Abuse Act was passed, putting steroids in a special prescription category, one that carried severe legal penalties for illegal sale or possession with intent to distribute. Remember, before 1988 steroids had always been illegal to sell or possess without a prescription. This new act simply added a very real threat of serious legal penalty (making it a felony, in fact).

Contrary to their attempts to reduce steroid use via legislation, steroid use only accelerated in years following the passage of this act. In response, Congress decided to go ahead and add steroids to the Controlled Substances Act as an amendment (Anabolic Steroid Control Act of 1990), making steroid possession, possession with intent to distribute, and distribution serious offences with penalties similar to those associated with morphine and other scheduled substances.

Interestingly, the transcripts from the Congressional hearings were clear in indicating that health concerns were not the main reason for making steroids controlled substances despite the fact that nearly every other controlled drug was on that list because of associated (and sometimes severe) health risks and dependency. Instead, Congress decided to control these drugs in response to the cries of athletic organizations and in response to a desire to limit adolescent use. Sure, the health risks were considered. But they were not the main motive or force for scheduling these drugs as "controlled." While there are several categories of controlled substances ("schedules"), steroids are placed in Schedule III, along with amphetamines, methamphetamines, opium, and morphine. Buying, possessing, and selling steroids, nowadays, is legally equivalent to buying opium and morphine.

Confused yet? If so, let me break it down. In 1990 steroids were vaulted to an extreme category of highly specialized prescription drugs, drugs that are more difficult to prescribe or obtain, drugs that carry severe penalties for their illegal possession, use, and distribution. This, of course, occurred on a federal level. To add more confusion to the issue, state laws vary with respect to steroid classification and the severity of penalties. All of this legislation, interestingly, occurred without the support of the American Medical Association, the FDA, the DEA, and the National Institute on Drug Abuse! All of these expert agencies actually testified, sometimes vehemently, against the federal and state legislation.

In direct response to the changes in steroid law, many individuals, from big-time black market steroid traffickers to small-time steroid users, have served significant prison sentences for their unlawfulness. Nevertheless, it's clear that these laws have not reduced steroid use in the general public or in athletics, which was their original intent. In addition, with respect to health issues, many believe that the Anabolic Steroid Control Act, rather than protecting the public, created the two biggest health problems associated with steroid use: counterfeit drugs and improper medical supervision.

Understand that regardless of whether on not drug laws are right or wrong, they are still on the books and we are all subject to them. If you choose to use steroids without a prescription, you are choosing to defy the law. In choosing to defy the law, you're accepting the risk of getting caught, serving time in prison, and/or paying some hefty fines and lawyer fees.

I'm An Athlete – What Do I Have To Know?

Whether this is an appropriate view or not, athletics have historically been seen as an endeavor that promotes health and well-being as well as the idea of fair play. Therefore, an embarrassing hypocrisy is present when drug use is rampant at the highest levels of athletics (pro and Olympic level sport).

In an effort to prevent the "tarnishing" of a long-standing athletic ideology, sport-governing bodies, historically, have attempted a two-tiered approach: lobby Congress for more severe drug regulations, and implement mandatory drug testing of athletes. Arguably, neither has produced the desired effect. At the same time though, abandonment of these policies would be an admission of defeat; indirectly condone drug use; and allow athletes who are more pharmaceutically daring to gain a competitive edge over those more conservative athletes. Therefore, governing bodies have remained steadfast in their commitment to their testing programs.

Drug testing in sport began in the late 1950's. However, the first testing for steroids was implemented during the 1976 Montreal Olympic Games after the creation of specific screening procedures (RIA – radioimmunoassay, and GCMS – gas chromatography – mass spectrometry). At this time, the testing consisted of analyzing urine samples (the only permitted testing fluid) using RIA for exogenous steroids. If they were found in urine, GCMS was used to confirm the results. Since this type of testing lacked specificity and since this method could not distinguish between endogenous and exogenous Testosterone, new methods were required.

This method of testing, however, could be overcome by a variety of methods:

Since there are serious problems with the T/E ratio for detecting steroid use (the current method), a new technique is being proposed for use. This technique uses IRMS (isotope ratio mass spectrometry) to distinguish exogenous Testosterone from endogenous Testosterone. Since Testosterone is made up of carbon atoms and different carbon atoms have different weights, IRMS can figure out how many of the lighter carbons (C12) and how many of the heavy carbons (C13) are around.

In addition, Testosterone and other steroids can be used without penalty by:

As you can see, the drug testing procedures are becoming increasingly more complex in an attempt to keep pace with new drugs and new techniques designed to beat the current tests. Unfortunately, with this complexity comes exponential growth in the expenses associated with testing. Off-season testing can cost up to $1000 per sample. In addition, in competition testing can cost upwards of several million dollars for an event like the Olympic games. Finally, it costs millions of dollars to fund research to keep ahead of drug users. As a result, some experts believe that testing methods are destined to fail.

Of course, the intensity of these efforts is directed at Olympic and international level athletes. Professional sport tends to treat drug use much differently and therefore avoids much of the controversy associated with Olympic sport.

Summing It All Up

This three-part introduction to steroids has attempted to provide an overview of the T-Nation's namesake by discussing steroid definitions, chemical structures, a brief history of steroids, an overview of how steroids were introduced to sport (part I). In addition, we've provided a brief introduction to modes of steroid delivery, how steroids work, and side effects (both good and bad) (part II). Finally, we've provided some information about legal issues and testing in sport (part III).

While this three part series has contained quite a bit of steroid information, it's barely scratched the surface of steroid knowledge. For more detailed information about steroid physiology, steroids and health, and steroid use for sport or cosmetic reasons, the following references should be of benefit. They represent a sampling of the information that's contributed to our knowledge on steroids.

Steroids and Side Effects (positive and negative): 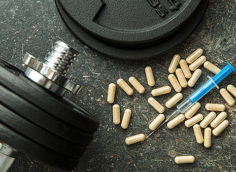 An 11-year study of over 800 men using testosterone replacement therapy came to some fascinating conclusions. Take a look.
Living Better, TRT
TC Luoma March 23
The older and wiser you get, the more you start to realize there are certain "universalities" common to successful outcomes in all of life's endeavors. These realizations are as certain as the law of gravity, albeit less obvious. You should know and understand these common threads because they make success less random and more predictable.
Opinion, Powerful Words, Strong Words
Charles Staley May 21