Y’all know resveratrol. Know how it earns a living, or at least you think you do. You’ve heard that it’s found in red wine and drinking it makes you live longer. Or maybe it makes your heart work better? Something like that.

Well, you’re in the right ballpark, but unfortunately, the game was on Tuesday and you showed up a day late and you can’t even buy a hot dog because the concession stand is closed.

Sure, resveratrol is found in the grapes used to make red wine, but the truth is the alcohol in that same wine might actually inhibit resveratrol’s otherwise beneficial effects on heart health.

Besides, even if that weren’t true, you’d have to drink about a dozen or so of those super-sized Nebuchadnezzars of wine to get an effective dose of resveratrol (a Nebuchadnezzar of wine is equivalent to twelve standard 750 ml bottles).

But at least you’re right about resveratrol itself possibly making you live longer.

The compound is what’s known as a “calorie restriction mimetic.” That means it causes the body to react in the same way it would if you severely restricted calorie intake. Specifically, both resveratrol and calorie restriction lead to the activation of certain proteins (SIRT) that can extend lifespan through a number of pathways and mechanisms.

But resveratrol does a lot more than that. A whole lot more.

How to Understand Resveratrol

To really understand it, we have to go Hannibal Lecter/Marcus Aurelius on it and ask of resveratrol: What is it in itself? What is its nature?

It’s a polyphenol, but more specifically it’s a phytoalexin, which are antimicrobial compounds produced by plants in response to internal and external stresses.

For example, one of the reasons grapes contain a lot of resveratrol is because the fruits are almost always under fungal attack. They make resveratrol so they can survive to fulfill their chardonnay, merlot, or pinot grigio destinies.

Grapes and a variety of other plants also manufacture resveratrol in response to mechanical injury or excess UV irradiation. It’s like the plants have their very own intricate, all-purpose defense system. That is resveratrol’s nature.

Fortunately for humans, it seems like much of its nature – its protective and/or healing properties – can be transferred to us simply by ingesting resveratrol. More specifically, resveratrol exhibits anti-inflammatory, anticarcinogenic, cardioprotective, vasorelaxant, phytoestrogenic, and neuroprotective attributes in humans, to name just a few effects.

Let’s look at just a few of these purported effects and see what the research says.

The most often touted benefit of resveratrol is its ability to act as a potent antioxidant. Just as it protects plants from excess UV radiation, it also protects animal cells against UV-irradiation induced cell death.

This antioxidant effect is so pronounced that manufacturers are examining ways to use resveratrol to prevent lipid oxidation in pharmaceutical products to extend their shelf life.

When given resveratrol, male rats exhibited increased testosterone levels, probably through increased activation of the hypothalamic-pituitary-gonadal-axis.

In other animal studies, resveratrol actually blocks the enzyme (aromatase) that makes estrogen. It also binds to estrogen receptors, but much less tightly than estrogen. Curiously, that might be a good thing. Because of this ability, it may increase estrogen-like activity when estrogen levels are low and decrease it when it’s too high.

Beyond that, this aromatase-blocking power can actually increase testosterone levels by preventing testosterone from being converted to estrogen or estradiol.

It appears that resveratrol may block protein degradation and enhance certain muscle-building pathways. At least it did that in fish that grew bigger (more lean tissue) when given resveratrol.

It’s also been shown to increase muscle strength and aerobic performance in rats.

Resveratrol hates cancer. It’s been shown, at least in animal experiments and in vitro, to inhibit all its stages, from initiation to promotion and progression.

Research shows that it not only acts at as a “chemoprotective” agent, but also displays chemotherapeutic properties associated with its anti-inflammatory, antioxidant, anti-proliferative, and pro-apoptosis (it causes cancer cells to kill themselves) properties.

Diabetic rat studies have shown that resveratrol can restore ventricular function by reducing inflammation and “decreasing unfavorable modeling of the diabetic heart.”

Neurodegenerative impairments such as Alzheimer’s, Huntington’s, Parkinson’s, and ALS are devastating, but resveratrol has been shown to play several neuroprotective roles against them.

This is probably because of resveratrol’s anti-inflammatory and anti-oxidant powers, but also because of its ability to improve mitochondrial function.

Resveratrol positively stomps on Candida albicans, in addition to 11 other Candida species. It also shows disdain for Gram-positive bacteria and Gram-negative bacteria in general.

Resveratrol first gained prominence because of its alleged life-extending properties and the subsequent research hasn’t done anything to damage or disprove that theory.

As mentioned at the beginning, resveratrol mimics calorie restriction, which has been shown again and again to increase lifespan in animals. It also induces “autophagy,” which is how organs and cells “clean house.” It’s literally a system by which an organism disposes of cells that aren’t functioning well.

Excess noise, like a lot of things, increases free radical production, which can damage ears and lead to hearing loss. Experiments with mice show that resveratrol protects against hearing loss by both mopping up these free radicals and improving blood flow to the ears.

Ophthalmologists are excited by resveratrol because, in theory at least, the substance could prevent age-related eye diseases like glaucoma, cataracts, and macular degeneration. Furthermore, it could protect eyes from environmental factors like UV light, cigarette smoke, and air pollution.

Once ingested, the cells that line the intestines soak up resveratrol. No problem there. Unfortunately, under normal circumstances, that’s when the trouble begins.

Resveratrol has a complex structure and a high molecular weight, so only about 12% of it ends up reaching the bloodstream and body tissues – hardly enough to reap the benefits. (I suspect that’s why a lot of lab studies in animals show inconclusive results.)

To really benefit from resveratrol, you need to overcome its poor solubility and low bioavailability. One way to accomplish that is to do what Biotest did and combine it with medium-chain triglycerides, or MCT.

Each gel cap of Biotest’s Rez-V™ provides 300 mg. of highly pure resveratrol. Take two every day for best results (the bulk of the research indicates that 600 mg. is the most effective dosage), but don’t wash them down with wine. 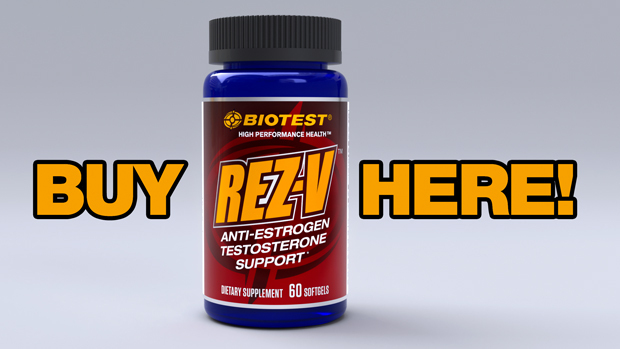