Damn it. I feel like I’ve just been slapped on the head with a cold mackerel. It seems I’ve been screwing up on the way I’ve been using omega-3 fatty acids. Maybe a lot of you have, too.

Here’s the thing: It seems that you need to ingest fish oil with a fat-rich meal in order for fish oil to do all of its pro-cardiovascular, anti-inflammatory health things.

A study in Germany (Rauch, et al.) showed “no significant benefits” of omega-3 fatty acids when they were ingested with a relatively low-fat breakfast meal.

I’ll give you one more: Kling, et al. found plasma concentrations of DHA and EPA were five times higher when administered with a high-fat meal than with a low-fat meal.

Ack! I’ve habitually been taking my fish oil with breakfast for years, and my breakfast, except for a dash of kefir, is about as low in fat as a brick! I suspect this is the case with a lot of other breakfast fish-oil users, too.

Unless you’re eating whole eggs and bacon for breakfast, your breakfast is probably pretty low in fat too, and you’re thus not reaping the benefits of fish oil.

The same, of course, goes for those who take their fish oil supplements with their protein shakes or with some other low-fat meal.

Dinner, typically, is the fattiest meal of the day. It’s when we usually eat the bulk of our meats (the leanest of which is still pretty fatty) and the majority of our olive oils or other cooking oils. It’s then that we should be taking fish oil capsules.

Ideally, choose a brand containing a higher amount of DHA than EPA, like Biotest Flameout®. 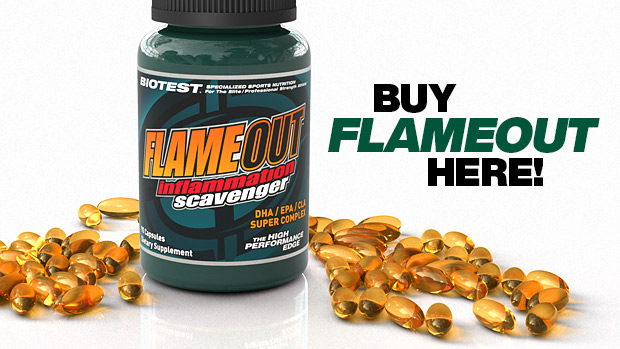