Inflammation is big business. With an aging population seeking to live a long and pain-free life, pharmaceutical companies are hard at work developing drugs to combat the many faces of inflammation. But this stuff isn’t just for old folks – young bucks looking to get bigger and stronger can benefit as well.

Inflammation is the body’s first response to an injury or infection. It was originally defined by the Latin words calor, dolor, rubor, and tumor, which mean heat, pain, redness, and swelling, respectively. What’s interesting is the pain, redness, and swelling aren’t directly caused by the infection or injury, but the immune system’s response to them.

When an inflammatory response is triggered, chemical messengers called cytokines are released. This causes local dilation of blood capillaries and the skin to warm and redden due to increased blood flow to the area.

Dilation of the vasculature creates gaps between the endothelial cells lining the blood vessels, allowing blood plasma to leak into surrounding tissues. This expansion of fluid volume induces swelling, which leads to pain by putting more pressure on local nerve endings.

While this all sounds like a very destructive process, acute inflammation is a normal part of life. The benefit of the temporary discomfort and swelling is that inflammation allows large numbers of immune cells to rapidly move into areas where they’re needed to kill any invading microorganisms and begin the healing process.

For example, you’re slicing your grass-fed flank into pieces to throw into a stir-fry and accidentally cut yourself. A blood clot rapidly forms to stop the blood loss, but the break in the protective barrier of your skin allowed bacteria in.

The immune system instantly keys up on the presence of these bacteria, triggering an inflammatory response. This makes blood vessels in the area “leaky,” causing swelling, pain, and redness, but it also allows white cells to rapidly move into the area and kill the invading bacteria before they can spread and create a bigger infection.

What About Training Soreness?

The last thing we want to do is steer you away from training like an animal, so you should know that the inflammation that accompanies hard training is good.

In this case, muscular contractions cause a local increase in cytokines, activating inflammation. Think of cytokines as local chemical messengers – they’re signaling proteins that help with intercellular communication, such as Interleukin 6 (IL-6) increasing muscle glucose uptake and the use of fats as fuel.

They also activate a local inflammatory response, kicking off a cascade of events associated with muscle growth and repair. Along with local growth factor release in response to mechanical tension, infiltrating immune cells play a direct role in satellite cell activation by locally releasing the cytokine TNFα.

Think of it like a construction site that’s been damaged by a storm or hurricane. The foreman (cytokines) tells his crew to bring in more building supplies and to get busy fixing things – but now, make the building even more stable by using more material than what was originally planned. The result is a bigger and better building.

These types of acute inflammatory responses are totally normal and are involved in everything from wound healing to muscle growth. But what happens when inflammation is chronic instead of acute?

This is a big deal. The medical establishment tells us that hypertension is the “silent killer.” According to many progressive doctors, chronic inflammation also deserves that designation.

Like acute or short-term stress, acute or local inflammation is usually okay. But chronic/low grade inflammation tends to be systemic, and can lead to joint stiffness and overall muscle aches and pain. At its most serious level, it can result in heart disease or insulin resistance, and most chronic degenerative diseases (think cardiovascular disease, various forms of arthritis, rhinitis) and even cancer are driven by chronic inflammation.

The bottom line is that chronic inflammation means loss of performance, and possibly even more serious health problems down the road.

Most of us eat too much omega-6 fatty acids and not enough omega 3’s. Here’s why:

Competitive inhibition of delta-6-desaturase. Referring to the diagram below, you’ll notice that the first step is dependent on delta-6-desaturase. When you take significantly more omega-3 than omega-6 – or vice versa – they compete against one another. This is why I tell people that super-loading omega-3 is not a good idea. 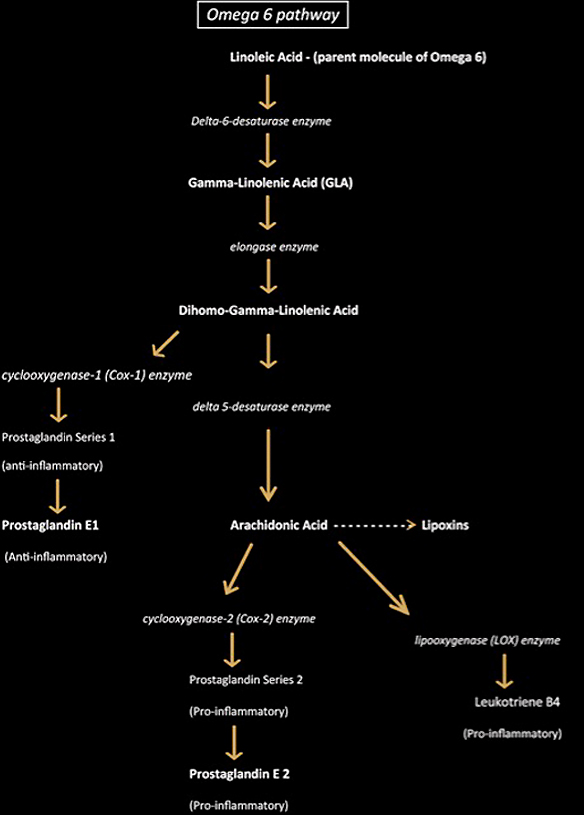 If you take in too much omega-3, you’ll have issues converting omega-6, which is also essential. So don’t fall for the “take 20-30 grams of fish oil a day” recommendations.

Fact is, some topnotch doctors report seeing patients with unusual bleeding and joint pain from taking excess omega-3. On the other hand, problems also occur with ingesting too much omega-6, which happens to be much more biologically active and will set the stage for more inflammation.

Here are some key points:

Let’s move on to the omega-3 pathway. 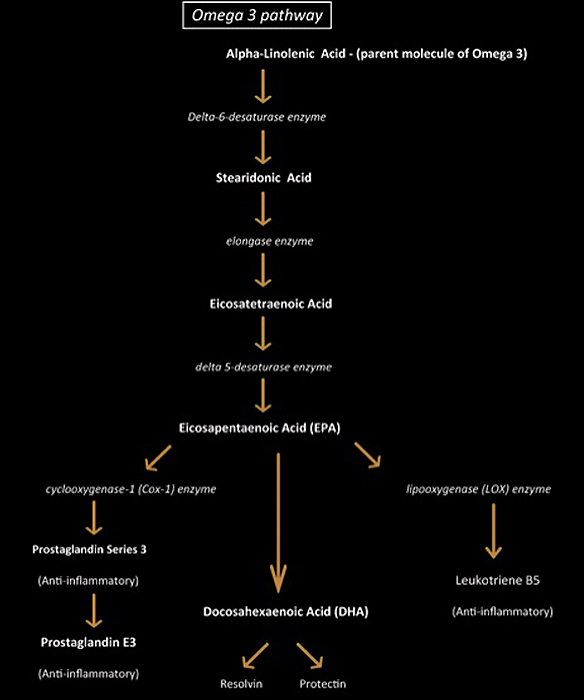 Just like trans fats, alcohol can slow delta-6-desaturase in its tracks. Alcoholics usually have chronic inflammation as a result. Go easy on the booze.

I’m referring to insulin injections here. In some cases it may be a medical necessity, but for those injecting it for its anabolic properties, just know that it also fires up inflammation.

Drinking a cup or two of coffee isn’t a problem, but those who drink it all day are also increasing inflammation.

Constantly slamming non-nutrient dense refined carbs can also create inflammation. One way is by making the delta-5-desaturase enzyme “hyperactive.” On the omega-6 diagram you’ll see that this is what converts DGLA to arachidonic acid, which produces inflammatory prostaglandins.

The most common way is to get a high sensitivity C-reactive protein test. Many physicians now use this test as a predictor for heart attack risk as well. Although not a perfect test, it’s great for measuring low-grade chronic inflammation.

However, don’t stop with the C-reactive protein test.

Next, get an omega-3 index test. Used to test for low omega-3, it’s also being used as a measure for cardiac risk. I like the idea – instead of eliminating cholesterol through drugs, focus instead on raising omega-3 levels.

Ask your physician to measure your antioxidant levels as well. They can measure Vitamin A, E, and various minerals like selenium. Low antioxidant status usually means higher inflammation.

While I don’t believe all anti-inflammatory drugs are evil, they are vastly overused and can be dangerous if abused. It’s one thing to pop a few Motrin once a month to relieve soreness, but constant use can lead to trouble.

Conventional NSAIDs (such as Motrin, Naproxen, Advil, etc.) interfere with both cox-1 and cox-2. (Refer back to the diagram to see where they fall in the EFA pathways.) Cox-1 is essential for keeping a healthy stomach. In fact, helicobacter pylori infections that lead to ulcers are often caused by NSAIDs.

After the cox-2 enzyme was discovered, a new class of drugs was developed (Celebrex, Vioxx, Bextra) that suppress cox-2 but leave cox-1 alone. However, it was soon found that these cox-2 inhibitors also increased the risk of heart attack by four times compared to traditional NSAIDs.