Tylenol is a Performance-Enhancing Drug

Unlike other over-the-counter pain relievers, paracetamol, aka acetaminophen or Tylenol, is actually a performance-enhancing drug.

Not so with the other common pain relievers, most of which are NSAIDs (non-steroidal anti-inflammatory drugs). They, of course, can help alleviate various types of pain, including delayed onset muscle soreness or DOMS, but few people seem to know that they also inhibit muscle growth.

They do this because their anti-inflammatory nature messes with a couple of enzymes known as COX-1 and COX-2, which can negatively influence muscle protein synthesis, muscle protein metabolism, and other cellular processes crucial to muscle-growth adaptations to exercise: Examples of these drugs include aspirin, ibuprofen (Advil, Motrin), naproxen (Aleve, Anaprox), and celecoxib (Celebrex).

Additionally, aside from its muscle-growth inhibiting side effects, ibuprofen appears to have another, even grimmer, side effect: it chemically accosts the Sertoli cells of your testicles. (1) This can result in lower luteinizing hormone (LH) levels and lower testosterone levels, along with gimpy sperm cells that can still swim, albeit with the aid of water wings.

Paracetamol, however, is not an NSAID, and it has only weak anti-inflammatory properties. It mitigates pain by inhibiting prostaglandin production, which puts a stick in the spokes of nerve transmission. Neither does it chemically kick your balls or, if taken judiciously, negatively affect muscle growth.

Multiple studies have, however, shown the drug to enhance athletic performance. Here's how.

Two research papers by Jozo Grgic of the Institute of Health and Sport at Victoria University in Melbourne have deftly synopsized nearly all the studies regarding paracetamol and athletic performance conducted between 2010 and 2021. (2,3)

While some studies showed negligible results, others showed exciting effects:

Not all the studies Grgic cited showed paracetamol to have ergogenic effects, but any lack of results seemed to be tied to appropriate timing and dosing. The dosage sweet spot seems to be around 1500 mg. of paracetamol (three 500-mg. Extra-Strength Tylenol) taken from 30 to 60 minutes before exercise.

The timing is probably even more crucial than the dosage because the drug's half-life is only around 1.5 to 2.5 hours, so taking it more than an hour before exercise will dampen the drug's effectiveness.

The traditional thinking about how pain relievers might increase athletic ability is simply by virtue of relieving pain: Athletes who experience high levels of acute muscle pain during performance are more likely to quit and hit the post-race concession stands to hunt for fruit jerky, whereas those who are immune to pain are more likely to press on harder and longer.

However, in particular, paracetamol seems to also attenuate neuromuscular fatigue and increase muscle activation (at least in resistance exercise), which likely would also improve exercise performance.

Oddly enough, paracetamol isn't currently prohibited by the World Anti-Doping Agency (WADA), although some think it should be. (4) As far as safety, paracetamol is heavily processed by the liver, so anyone who wants to use it as a performance-enhancing drug should be somewhat careful. But problems generally don't surface until people take more than 4,000 mg. (4 grams) in a 24-hour period, at which point the liver might begin to groan.

Take note, though, that this apparent attenuation of ribosomal protein phosphorylation happened when athletes took paracetamol both before and after training. Likely, it wouldn't occur (given the drug's short half-life) if, as suggested in Grgic's analysis of paracetamol studies, athletes only took the drug before exercise/competition.

I'm not sure if using paracetamol/acetaminophen/Tylenol as a performance enhancer is worth it. In many ways, it seems you'd be better off using creatine (far less chance of liver damage) as many of the effects seem to be the same. And, like paracetamol, creatine isn't prohibited by WADA, either.

Of course, creatine doesn't appear to be a pain reliever like paracetamol. If I were looking to address DOMS or increase performance by mitigating training-induced pain, I'd surely pick Micellar Curcumin over paracetamol or any available over-the-counter pain reliever. In fact, at least one head-to-head study between paracetamol and curcumin found that the latter fared far better in alleviating knee osteoarthritis pain. (5)

Still, further studies might find that paracetamol/acetaminophen/Tylenol has other performance-enhancing properties that we haven't yet considered.

What you do after you ingest protein could greatly affect absorption.
Nutrition & Supplements, Performance Proteins, Protein, Tips
TC Luoma August 12 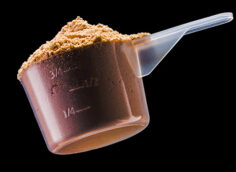 Men's Health named their top pick for best protein powder. They had a whole list of them actually. Some of their choices are plain ridiculous.
Dietary Myth Busting, Protein
TC Luoma November 9