A couple of weeks ago, I read a Facebook post from a fairly well-known nutrition writer. It said something along the lines of how testosterone boosters don't work. No explanation, just a one-sentence statement. A lot of his followers seemed to agree with him by liking his post.

These are largely the same people who think you can use supplements to lower cortisol levels, improve insulin sensitivity, block estrogen, or affect any number of biochemical reactions or processes, but using them to raise testosterone? That's voodoo stuff.

But I guess I can see why these testosterone-booster disparagers think the way they do. They're undoubtedly comparing these supplements to actual testosterone replacement. Sure, no testosterone booster on the market will work as well as injecting testosterone cypionate into your glute.

Many of these supplements do increase testosterone levels, though. Products like forskolin carbonate and Eurycoma longifolia are extremely effective in providing a modest boost in testosterone – enough to either bring you back up to normal or just give you a boost so that losing fat, making muscle, or making love is a little easier.

One of the earliest of these testosterone boosters was the herb Tribulus Terrestris, which is part of the Alpha Male® formula. It's lately been the subject of new research, and it deserves a second look.

Tribulus Terrestris comes from a leafy plant, and it's commonly known as puncture vine, caltrop, or goat's head. It grows in Asia, Africa, and the Middle East, but the best stuff is Bulgarian-grown Tribulus.

The herb has long been used in traditional Chinese medicine and Indian Ayurveda medicine to enhance libido, establish hormonal balance, and keep the urinary tract healthy.

The thing is, I've never really promoted it much. I wasn't perfectly comfortable doing so. Oh, Biotest's internal research showed that this herbal aphrodisiac worked well in raising testosterone levels and increasing sports performance. Still, the formal, published-in-journals research was all over the place. Some studies showed that it worked; others showed that it didn't.

Regardless, we've always assumed that the results from clinical studies were sometimes lackluster because researchers were probably using Tribulus that wasn't potent – stuff that might have been grown in poor soil or picked at the wrong time and wasn't standardized to contain the highest percentage of the active ingredients.

Some Japanese researchers recently backed us up on that theory. Writing in a study on the positive effects of Tribulus on intensely trained male boxers, they guessed that the content of the biologically active compounds vary "depending on geographical region, climate, and parts of the herb, which may partly explain the divergent results of Tribulus extracts from different studies." (Ma, 2015)

Let's first examine what happened in that study of boxers, along with another study that tested the effects of the standardized herb on middle-aged men.

The study involving boxers was designed to see how Tribulus affected muscle mass, muscle damage, and anaerobic performance and whether any of that might have been influenced by changes in IGF-1, GH, or testosterone.

In a second study, Polish scientists tested 14 men between the ages of 45 and 60 for 12 weeks. For the first six weeks, the guys in the experimental group were given 900 mg. of Tribulus in split doses. From weeks 6 to 12, the men received 1,800 mg. in divided doses. All men, including the controls, used a good resistance-training program.

At the end of 12 weeks, the men in the Tribulus group showed the following:

Historically, we've thought that Tribulus works because it contains high levels (at least in standardized extracts) of protodioscin, a steroidal saponin. In turn, this steroidal saponin may act as a luteinizing-hormone secretagogue. That means it prompts the pituitary to kick out more luteinizing hormone (LH). This surge of LH then prompts the testes to produce more testosterone.

That may or may not be true. No one knows for sure. Tribulus certainly increases testosterone levels, but it may have more to do with inhibiting key enzymes responsible for the unwanted conversion of testosterone to estrogen and DHT. After all, if you inhibit conversion, you automatically ensure higher levels of testosterone.

Others think that Tribulus may enhance androgen receptor density in the brain (and possibly muscle tissue, too). That means testosterone has a lot more places to park and do its stuff. However, this increase in testosterone might only occur in testosterone deficient people, as was the case in the study involving middle-aged men.

Conversely, the young boxers in the first study didn't exhibit much of a change in testosterone levels after being supplemented with Tribulus, maybe because their initial testosterone levels were presumably up to snuff – they weren't deficient. Regardless, they did exhibit increased power and less muscle damage than controls.

This led to speculation by the scientists that Tribulus may, by decreasing levels of the IGF binding protein IGFBP-3, lead to increased activity of IGF-1 – GH's errand boy. Once the pituitary cranks out some GH, it tells the liver to make IGF-1, which then proceeds to stimulate every type of cell in the body, including muscle cells.

Tribulus has long been used as an aphrodisiac, and a number of studies have confirmed its pro-sexual use. One found that consuming 750-1,500 mg. of Tribulus daily for two months led to a 79% increase in male sex drive. Similarly, 67% of women who consumed 500 to 1,500 mg. a day for 90 days experienced increased sexual desire. (Neychev 2016)

While the credit for these pro-sexual effects has long been given to Tribulus's androgen-increasing properties, there's emerging evidence from animal studies to suggest there are some endothelium and nitric oxide-dependent mechanisms underlying Tribulus's effectiveness in this regard.

Erections are all about hydraulics, and if you relax the endothelium of blood vessels and increase the production of nitric oxide, you get a more functional erection. Females respond in much the same way to an increase in nitric oxide, too. The blood flow to the clitoris increases, causing clitoral engorgement, extrusion of the glans clitoris, and thus enhanced sensitivity.

Tribulus's effectiveness comes down mostly to strength and purity. The best Tribulus Terrestris comes from Bulgaria, and it's the only type Biotest uses in its Alpha Male® formulation.

The Bulgarians know exactly when to harvest their Tribulus plants and, more importantly, they know which parts of the plant to use. For instance, they've discovered that levels of saponins and other powerful compounds increase before and during the flowering stage while decreasing during the stage when fruit is produced. Likewise, they know that the leaves and roots have the highest concentration of saponins, followed by the fruits and stems.

Don't assume, though, that Biotest is simply jamming those Bulgarian leaves and roots into a capsule the same way your grandma jams loose tea leaves into her tea infuser. No, they use a highly purified extract. – 500 mg. per serving, formulated at a 50:1 extraction ratio. That means that it has 50 times the full spectrum of active ingredients as the original herb in dried form.

This attention to detail allows Biotest to produce the most potent, full-spectrum extraction of Bulgarian Tribulus in the world.

All of this brings us back to the original question: Do testosterone boosters work? Well, there shouldn't be much argument in accepting that forskolin carbonate and Eurycoma longifolia are effective in raising testosterone levels, but given the recent research, we can now comfortably add Tribulus Terrestris to their ranks. 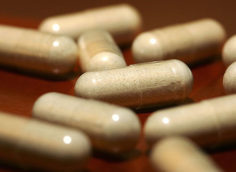 The list of resveratrol benefits keeps growing. Here's what it does, the foods that contain it, the supplement dosage to take, and more.
Estrogen Control, Nutrition & Supplements, Resveratrol, Super Health, Testosterone Optimization, Tips
TC Luoma February 21