It seems that just about every pesky disease and condition out there that can shorten your life – or at least really screw it up – links back to something called inflammation.

From painful and annoying tendonitis that wrecks your training program to heart disease that wrecks everything else, inflammation is at the root of it. This immune response seems to always be scurrying around behind the scenes and controlling everything. Kinda like your mother-in-law.

So, um, what is inflammation exactly? And how do you squash it?

Nutritionist Mike Roussell knows, and he'll tell you how! – CS 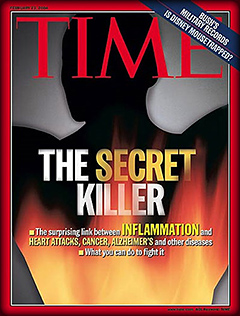 Inflammation has been featured on the cover of Time magazine, it's the marketing hook behind countless diets, and it's the driving force behind diabetes, cancer, aging, heart disease, inflammatory bowel disease, Alzheimer's, Parkinson's, arthritis, and even obesity (minus the stuffing your face with Taco Bell part).

Ironically, inflammation is a naturally occurring process that provides your body protection. It's when the inflammatory process gets out of control and tips the scale too much in the direction of redness, swelling, heat, and pain that you start to have problems.

An example of how inflammation actually helps is during the post-workout period. Your training session causes all kinds of damage, thus inflammation. But this is an important part of the hypertrophy process. Inflammation helps with recovery.

I know that sounds almost like blasphemy, but the compounds in your system that move the inflammatory process along (i.e. inflammatory mediators) cause vasodilatation and increased blood flow to the damaged areas – your muscles. There's even some research to show that exercise has an anti-inflammatory effect.

So what about the bad stuff? One major area in which bodybuilders battle inflammation on a daily basis is in their joints. The wear and tear that our joints experience can be the most debilitating pain that we suffer with respect to our training. This is an area where you will directly feel the impact of excessive inflammation and then the relief when you quench it.

How can you control these flame-ups? Stop squatting? Hmm, not likely.

Option two would be to start popping Advil and Aspirin like M&M's. That'll work temporally, but it would also leave you with a hole in your stomach.

Fortunately, there are several nutritional solutions that won't leave you with a stomach lining that's bleeding and your knees still aching.

"Let food be thy medicine and medicine be thy food."

From a dietary standpoint, we can attack inflammation from two different angles: by changing the inflammatory fuel source and the machinery.

First let's look at affecting the fuel source. In order to mount an inflammatory response, your body needs the raw materials (similar to using amino acids to build proteins). In this case, it uses fatty acids to create inflammatory mediators.

Where does it get the fatty acids? It actually clips them off the cell membrane. Fortunately, which fatty acids make up your cell membranes is directly impacted by your diet.

So what do you need to do?

That is an over-simplified way of looking at the situation, but I'm sure you get the point. Certain fatty acids directly get put into the inflammatory cascade pathway, so by manipulating the levels of certain fats in our diet we can impact inflammation. The important fatty acids in this area are EPA, DHA, and GLA.

These fatty acids lead to the formation of a compound called PGE3 which is mildly anti-inflammatory but not pro-inflammatory, so the net effect is less inflammation.

How to you get these fatty acids into your diet? Food and supplements.

As I mention in my article about GLA, this stuff is found in such small levels in foods that you need to take it in supplement form via evening primrose oil or a fatty acid complex. EPA and DHA you can get in your diet from fatty fish or a supplement like Flameout®.

Inflammation Attack #2 – Throw a Wrench into the Machine

Now let's look at how you can manipulate your body's inflammatory machinery. Just about all inflammatory processes go through the cycloxygensase enzyme (COX). Fatty acids dock inside the COX enzyme and are modified to begin their conversion to inflammatory mediators.

Before we go any further, it's important to look at the different types of COX enzymes, as this plays a big part in how we treat inflammation.

A major difference between the COX-1 and COX-2 enzymes is that COX-1 is found throughout the body while COX-2 is just expressed when needed, i.e. your body needs to mount an inflammatory response in your knee joints and the COX-2 enzyme would be synthesized in that area.

The fact that COX-1 is always found throughout the body is an important piece of the puzzle when we start talking about inhibiting these enzymes to reduce inflammation.

Blocking COX without Killing Yourself

Even if you're unfamiliar with the mechanisms of inflammation, I'm sure that you've heard about COX-2, the center of the Vioxx drug scandal several years ago.

Vioxx was a drug used to fight inflammation by inhibiting the COX-2 enzyme, but it turned out that it had other possible side effects (like, um, death) so it was removed from the market.

One of the reasons that drug companies are so invested in finding a drug that only inhibits COX-2 lies in the specificity of COX-2 to inflammation. There are currently numerous non-specific COX enzyme inhibitors (meaning that they'll block both COX-1 and COX-2 action) on the market, and you've probably used one of them recently: aspirin or ibuprofen.

Aspirin is very unique in that it modifies the COX-2 enzyme such that the fatty acids can't dock in the proper configuration. This changes the conversion process and instead of forming pro-inflammatory mediators, compounds called resolvins, lipoxins, and protectins – which are responsible for cleaning up the mess after an inflammatory attack – are formed.

Aspirin, however, isn't just specific to the COX-2 enzyme. Like ibuprofen, it'll block the COX-1 enzyme. Why is this such a problem?

One reason is that you have a lot of the COX-1 enzymes that are expressed in the lining of your stomach. They play an integral role in maintaining the proper acidic environment. This is why people who take too much aspirin or ibuprofen can find themselves with ulcers.

If you were to take a drug/supplement that was specific just to the COX-2 enzyme, you'd avoid all the GI complications while still enjoying the anti-inflammatory effects.

An Answer from Nature

The most promising natural COX-2 inhibitor is curcumin. Curcumin is an antioxidant that's a major component of the spice turmeric. It was first brought to my attention several years ago by Alwyn Cosgrove in a discussion about nutrition and supplementation interventions to fight cancer.

It turns out that the same mechanism in which curcumin fights cancer is also how it fights inflammation.

Unlike aspirin or Advil, which blocks the active site of the COX-2 enzyme (i.e. the place where the fatty acid "docks" in order to be converted into an inflammatory mediator), curcumin actually reduces the amount of COX-2 that your body produces through inhibiting COX-2 mRNA synthesis. Curcumin has also been shown to reduce the expression of tumor necrosis factor and NF-kB, two other mediators of inflammation.

Curcumin seems to positively impact your health via several different mechanisms by fighting inflammation, oxidation, and free radicals, and even lowering your cholesterol levels. The body of research behind curcumin is growing, especially in the area of human clinical trials.

Like fish oil, it should be considered a safe and effective adjunct to your quest to normalize the inflammatory equilibrium of your body.

Whether you're trying to stop joint pain so you can bench more or you're starting to think seriously about longevity and disease prevention, quenching inflammation is the place to start. And it begins not at the pharmacy, but with tactical nutrition and supplementation. 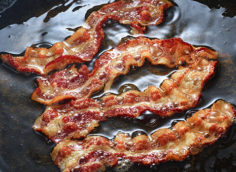