Quinoa is one of those foods that self-proclaimed manly men make fun of, like arugula, or quiche, or pretty much any vegetable that can't be found nestled above a half-pound burger patty. That's too bad because, ironically, quinoa, despite sounding a bit foo-foo, might actually be the ultimate manly meal.

Quinoa is not a cereal grain but a seed, and it can be used practically anywhere you'd use rice. And while I'm not aware of any specific studies to support quinoa's ability to turn you into a sack master, just about every nutrient in quinoa has the potential for improving your sexual ability and even increasing your muscle mass.

Testosterone authority Lee Myer has pointed out some of quinoa's intriguing, man-friendly attributes. They include: 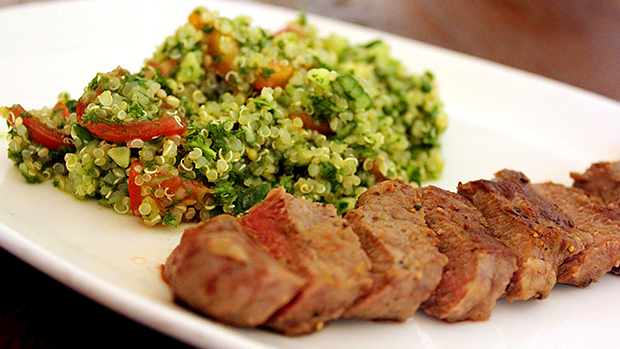 There's the possibility that eating quinoa a couple of hours before sex might improve the quality of your erection, courtesy of the arginine and glutamic acid. The rest of the beneficial effects, like increasing testosterone and enhancing sex in general, would occur over days and weeks, not hours.