The vast majority of men who get castrated lose their ability to achieve an erection. Clearly, testosterone has something to do with erections. How much, we don't know, because the relationship is tricky, especially when you take into consideration that hypogonadism (having low T levels) isn't a common finding in men with ED (only about 5%).

That being said, elevating testosterone to "normal" or super-normal levels generally improves the quality of erections in most men, turning so-so hard erections into steely monuments to passion. Moreover, a higher T level generally increases sex drive and arousal, which in itself leads to stronger and harder erections.

I covered ways to increase NO levels in the blood here, which can lead to on-demand improvements in erection quality. Improving testosterone levels, however, as we'll discuss, isn't as fast acting, i.e., a single injection of testosterone given this afternoon won't have much effect on your erection or libido tonight, but regular, repeated injections will. Sexual benefits usually kick in fully at about week 3 and plateau between weeks 19 and 21.

Chances are, you don't need full-blown testosterone replacement as prescribed by a physician; you might just need a small "natural" boost, one that's easily accomplished by any of the following supplements:

Up to 85% of all Americans are deficient in magnesium. This is potentially a huge problem because the mineral is intimately involved in over 300 biochemical reactions in the body, including some that influence the production of testosterone.

Classic symptoms of a magnesium deficiency include fatigue and muscle cramps, but your magnesium gas tank would really have to be low for you to experience them. However, you could be only mildly deficient in magnesium and still experience low testosterone levels.

Deficiencies of zinc aren't as common, but they pose an equally daunting threat to your health as the mineral also plays a big role in hormonal status (and cell division, wound healing, energy levels, and carbohydrate management, among other things).

While not having enough of either mineral is bad news, being deficient in both zinc and magnesium is exponentially worse. Not only can it negatively affect your health in general, but it can also direct a biochemical, steel-toed kick to your poor old gonads in particular.

Without adequate amounts of these crucial minerals, testosterone levels drop and testicular function in general falters.

That potentially drops testosterone levels even further, making progress even more difficult to come by. It's a cruel, cruel irony.

Malaysian men have been using this herb for hundreds of years to enhance both the quantity and the quality of their sexual engagements.

Up until very recently, we thought that eurycoma's sexual effects were solely related to two particular quassinoids, which, to those of you who have a working knowledge of biochemistry, are metabolically altered triterpines.

These two quassinoids – eurycomanone and 13-alpha- (21) dihydro eurycomanone – elevate levels of luteinizing hormone (LH) and follicle-stimulating hormone (FSH), which in turn direct the testes to crank out more testosterone.

All of the preceding explains why we thought this Malaysian herb led to better erections. Little did we know that another, separate mechanism was involved, one that's far more reliable than just what might occur with elevated levels of sex hormone.

As mentioned, one of the chemical messages that facilitate erections is NO. Another is a family of chemicals known as rho kinases (ROCK). When you inhibit ROCK, you get bigger and stronger erections, and eurycoma was found in a recent study to specifically inhibit ROCK-2, an action which researchers believed might explain the herb's use as an "aphrodisiac."

Of course, the strong erections attained through use of eurycoma might also be the result of a synergism between elevated testosterone, ROCK-2 inhibition, and perhaps some other yet to be discovered mechanisms. Anyhow, this stuff rocks.

You can find it as a lone supplement, but a great source is Biotest's Alpha Male® formula, which also includes two additional testosterone-boosting compounds, Tribulus terrestris and Coleus forskolii.

The herb has long been used in traditional Chinese medicine and India Ayurveda medicine to enhance libido, establish hormonal balance, and keep the urinary tract healthy.

Historically, we've thought that Tribulus terrestris (TT) works because it contains high levels (at least in standardized extracts) of protodioscin, a steroidal saponin. In turn, this steroidal saponin may act as a luteinizing-hormone secretagogue, which just means that it prompts the pituitary to kick out more luteinizing hormone (LH). This surge of LH then prompts the testes to produce more testosterone.

You can obtain Tribulus as a standalone supplement or, as mentioned, you can find it in Alpha Male®.

The active ingredient of this plant is called forskolin and it can do a variety of things for the body that you normally can't get without dieting and exercising. It does this primarily by stimulating production of an enzyme named adenylate cyclase, which in turn increases levels of a cellular messenger called cyclic AMP, or cAMP for short.

In turn, elevated levels of cAMP increase testosterone levels. You can find forskolin as a standalone product (Carbolin-19®) or, yet again, you can find it in Alpha Male®.

The evidence behind this one isn't as strong as some of the others in this list, but one study found that obese men who used it increased their testosterone levels significantly.

Regardless, it's a great supplement to take in general because of, among other things, its huge role in strengthening your immune system. Dosages are all over the board, but 2,000 to 5,000 international units a day should do the trick.

Ideally, use microencapsulated vitamin D3, as found in the I-Well™ supplement.

Various other supplements are said to improve erectile function by means other than increasing testosterone levels. Among these are maca powder, derived from a root vegetable in the Andean highlands, Panax ginseng, fenugreek, and L-Deprenyl, a drug ordinarily used to treat Parkinson's disease.

Chances are, though, that if they actually work, they do so by kicking up testosterone production a notch. They all need further research before I can recommend any of them, though. 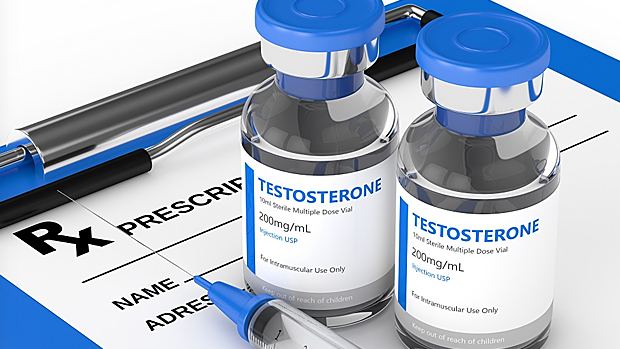 What If You Need a Bigger Boost of Testosterone?

If, however, none of these supplements or drugs gives you the bang you want or allow you to bang the way you want, you may want to go for the real stuff, i.e., straight testosterone.

While it's true that testosterone gels (see below) create a more natural ebb and flow of testosterone, injections – provided they're administered properly – give you the most muscle-building, libido boosting, rock-your-world bang for the buck.

You essentially have two injectable choices in America, testosterone enanthate and testosterone cypionate. The half lives of these esters differ slightly, but it's not that big a deal, especially if your dosing is adequate and you've chosen a suitable injection method and schedule.

For most men, 100 mg. a week of either ester is enough for effective TRT or, for our purposes, ensuring a highly functional erection.

Even if you're injecting weekly (always on the same day), you still might suffer a bit of a low-testosterone lull as you get further away from injection day. To remedy this, many men split their dosage in half and inject twice a week instead of once a week. Doing so keeps your blood levels of testosterone fairly stable.

Additionally, you might want to consider subcutaneous (sub-q) injections rather than intramuscular injections. Recent research shows that sub-q is much more effective, so much so that 80 mg. of testosterone injected under the skin is equal to 100 mg. injected intramuscularly. There's also less conversion of testosterone to estrogen.

To do a sub-q injection, just take a pinch of skin on your glute, thigh, or even belly, and inject a tiny needle into the fold at either a 45-degree or 90-degree angle. Fully depress the plunger, release the skin, and you're good to go.

Testosterone gels provide a much more natural androgen rhythm and there's probably some argument to be made that attempting to mimic the body's natural rhythms is the way to go. However, many believe it doesn't have the same bang for the testosterone buck as injectable esters.

Besides, gels have their drawbacks. You should only apply gels to freshly showered skin. You should refrain from swimming or working up a sweat for at least an hour. Furthermore, you can't, under any circumstances, let a child or female (especially a pregnant one) come into contact with the treated area until it's absolutely dry.

If you do decide to use gels, you must apply them once (or in some cases, twice) a day. Don't use your hands to apply the gel, though. Any gel on the hands doesn't soak in to the bloodstream; it's like applying gel onto the back of an armadillo, which isn't very permeable. Instead, squeeze the gel onto your forearms and rub them together like a fly rubs its forelegs together after feasting on some road kill. That way you won't waste any.

Just about everything else, including creams, pellets, and sublingual drops, aren't much worth discussing. Granted, creams can be effective, but they're messy and they don't penetrate the skin as well as gels. Pellets and drops, however, are either ineffective or impractical and make accurate dosing all but impossible.

The Potential Negative Side Effects of TRT

There are a small number of negative side effect possible from TRT. One is only an issue if you have prostate cancer before starting TRT therapy. Note that there's absolutely no evidence – even after researchers have compiled thousands of studies and patient histories – that TRT can cause prostate cancer. However, for some reason that we don't totally understand yet, TRT can make prostate cancer worse. That's why it's important to have digital rectal exams (DREs) every year while continuing to monitor prostate specific antigens (PSA).

TRT can also cause a condition called polycythemia, which simply means that the testosterone therapy has caused your body to produce too many red blood cells. Instead of freely flowing through your veins, your blood gets thick and spurts along like the stuff that comes out of the Dairy Queen soft serve machine and it can understandably cause heart attacks and strokes when it clogs up your plumbing.

That's why it's important to monitor both hemoglobin and hematocrit. If hemoglobin exceeds 18.0, or hematocrit exceeds approximately 50.0, you either need to adjust your dosage of testosterone, donate some blood to the Red Cross, or submit yourself for what's called therapeutic phlebotomy (a simple blood draw in a doctor's office).

Even the much-dreaded gynecomastia is almost unheard of in males receiving TRT. Gynecomastia, or the growth of male breast tissue, is seen almost exclusively in men taking professional bodybuilder levels of testosterone (1,000 to 3,000 mg. a week) or testosterone analogs. Hair loss is a possibility, but it seems to stabilize in your 30's. If you've made it that far without losing your hair, it's highly doubtful that TRT will make things any worse.

All of the rest of the stuff you may have heard about testosterone causing heart attacks or anything else bad is horribly, horribly wrong. If anything, men with low testosterone levels are much more prone to a host of maladies, including heart disease, diabetes, dementia, and pretty much everything else usually associated with old age, death, or decrepitude in males.

Finally, it's extremely improbable that any of these possible side effects would occur if you were just using testosterone-boosting supplements and not actual testosterone.