A Story That Needs to Be Told

Several things happened to make me go cold turkey on steroids, the last of which was precipitated by four guys breaking into my house and putting a gun to my head and my dog’s head, but I’ll get to that later.

I personally knew at least ten people who died young due to bodybuilding pharmaceutical use and abuse. I knew countless others whose lives were ruined or otherwise negatively impacted.

Then there are the acquaintances who’ve had heart attacks and mild strokes. They were lucky to survive such warnings from their bodies, and yet they did nothing about it. They continued to roll the dice.

I also know more than my share of women in the hardcore competition world for whom PEDs served as gateway drugs to other kinds of dangerous recreational drugs that landed some of the lucky ones in rehab.

Some were using cocaine, or worse, methamphetamine, to get ripped for the stage. It’s one of the best kept secrets of female competitive bodybuilding. It would make me cringe to then watch these same people go on social media and glorify the competitive experience while insinuating how healthy it was.

But I also know about the risks of PEDs from my own personal experience. This is a story I’ve told very few people, until now. 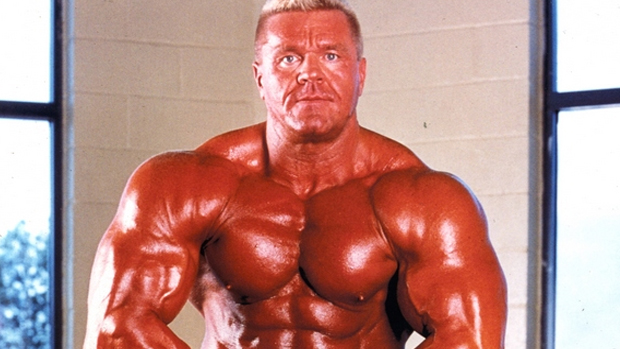 Done With the Lunatic Fringe

It began for me at a guest posing appearance at a bodybuilding pro show. The competitors talked about nothing but their drug use. One of them was limping. I looked at his legs and I saw gross-looking welts. He said he’d been doing site injections into his vastus lateralis, hoping to bring out his thigh sweep.

That was just one of the stupid, disgusting things I saw that night that made me realize how dark bodybuilding had become.

I decided then and there that I was done with the hardcore world. I was supposed to go out and set up a booth just before intermission and sign photos, but I just gathered my things and walked out the back door.

I never wanted to be part of that world again. I still trained and coached competitors, and I would for the next several years, but personally, I was done with the lunatic fringe. The lifestyle I cut my professional teeth on, and that I was so devoted to and passionate about, seemed to have disappeared.

A Gun to the Head

At the same time, I was training at a really well-equipped hardcore gym. I liked the training atmosphere there a lot – old school hangin’ n’ bangin’. There were a couple of hardcore guys at this gym that often spotted me on heavy lifts, like when I needed to hoist 160-pound dumbbells to my chest for incline presses.

A few of them were in the same close-knit group and they were always friendly to me. The rumour was that they were either affiliated or actual members of a biker gang, but that didn’t matter to me; I’ve always responded to people the way they responded to me.

One day, two of these guys asked me about one-on-one coaching, but they didn’t want me to do their assessment at the gym. Instead, they asked if they could come by my house to sign up and that maybe a couple of their friends were interested in signing up as well.

I agreed to see them and we set up a time for them to come by my place so I could do their physique assessments and get them started. When they came to my door, there were four of them. At first I thought to myself, “Great, four new clients at once. That’s a lot of money.”

I walked them down to my office and that’s when one of them stuck a gun to my head. Even more frightening, one of them grabbed my dog Hooch and stuck a gun to his head as well. They were there because they thought I’d have a large stash of steroids they could parlay into a big score.

And the truth is, I did have some anabolics at my home, but not nearly on the scale they were hoping for. They took practically everything I had – cash and anything else that was valuable – and they were gone.

In the immediate aftermath of this home invasion, I had a nasty physiological adrenal/stress response. My fingers and toes swelled up and hurt. Almost immediately, I developed what’s known as “moon face.” I looked like someone whose face was stung by a bee and had an allergic reaction. My stomach got hugely bloated too.

I had been lean, ripped even, but in a few hours my body turned into a gross, edematous mess.

I went to the doctor right away and he prescribed some diuretics and a sedative and he expedited some blood tests. I got the call later that day to come into the office because he wanted to go over my blood tests with me, and that’s never a good sign.

I’ll never forget what he said: “Let me put it this way. I have a patient in his 60’s who’s had four serious heart attacks already, and his blood panel looks better than yours.” That statement served as a gut punch. I felt disgusted that I’d treated my body this way while convincing myself I was part of a “fitness” industry.

I’d actually convinced myself I was healthy. I also felt disgusted that I’d been close to a group of people that I’d invited into my home and who’d then put a gun my head.

That did it. I was done, done with all of it.

No tapering off, no rationalizing or any of the mental gymnastics I’d used to justify my steroid use. I just stopped cold turkey the second I left the doctor’s office.

Within 8 weeks off steroids, my blood panels returned to normal and healthy ranges again. And at the 12-week follow-up, my blood panel was even better. When the doc looked at my the results from my 20-week follow-up, he exclaimed, “I wouldn’t have believed this if I hadn’t seen it myself! Your blood looks like a healthy person in their 20’s!”

And, as you’d expect, the heavy muscle weight came off slowly but surely. Regardless, my knowledge of the game of physique transformation allowed me to keep looking like a guy who walks his talk.

Below is a photo of me from the hardcore days: 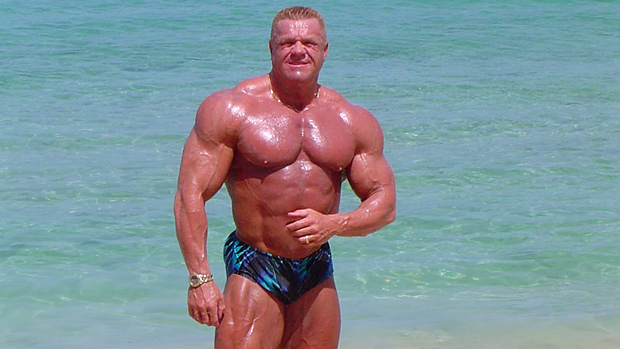 And here’s me on the beach in Dubai in 2016, at age 55. Still the same physique structure overall, but obviously smaller. 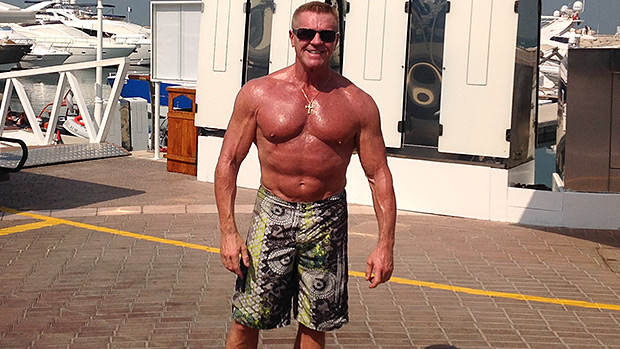 I haven’t weighed myself in years because, frankly, I don’t believe in it, but I suspect I’ve dropped about 40-50 pounds. I went from 4X or 5X shirts to about a 2X and sometimes even an XL. I do mostly whole-body workouts now and that works great for me.

Training bodybuilding and figure competitors to champion status and looking the “hardcore” part myself is well behind me, and I have no regrets and certainly no second thoughts of ever using PEDs again.

I’ll likely always live the hangin’ n’ bangin’ bodybuilding lifestyle, just without the pharmaceuticals. Still, I worry that people, too many people, won’t get my message.

The Sceptics are Either Dead or Dying

When I let it be known that I was forgoing the juice and letting go of that phase of my life, a few people were quite outspoken about it. Two former clients of mine in particular were saying things like, “Yeah, right, once he starts shrinking, Abel will be right back on the sauce. He won’t be able to handle getting small!”

The only reason I mention these two former clients in particular is because both of them ended up dying in their 40’s. One dropped dead on the gym floor, leaving behind a wife and three young daughters, and the other was Greg Kovacs, who no one in the inner-circle of bodybuilding expected would live a long life anyway. 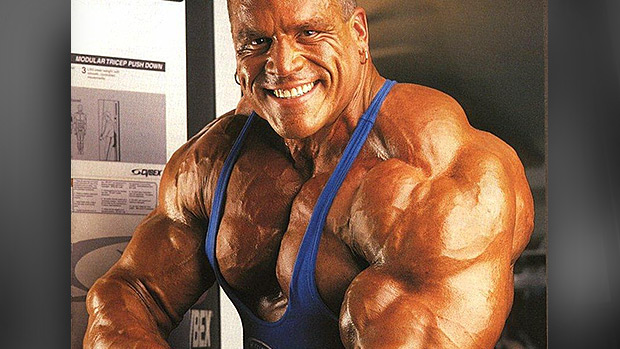 In fact, I’d stopped training Greg Kovacs and dropped him as a client because of his insane, uncontrollable drug abuse, but mentioning these two guys is important because it points out that they were projecting onto me their own fears of “getting small.”

I only wish they were still around to face those fears, but if you knew them, you knew that wasn’t ever going to happen. Similarly, I received an email a couple of weeks ago from a former client who used to compete. He wanted to know how I was able to go natural after being “a jacked up beast who could have competed in the Olympia.”

He wanted to know how hard it was for me “to get small” again. He wanted to know if it played head games with me. He too was projecting his insecurities onto me. But here’s the crazy part – he’d just had his second heart attack.

He’s barely 50 years old. He’d been advised to get off his steroid stacks if he wanted to avoid another cardiac episode, but he also wanted me to tell him that there was some way to keep using steroids while magically improving his health.

He’d already gotten his answer – get off the steroids. He just didn’t want to accept it.

When people come to me and ask me about the risks of steroids use, I know about them first hand, second hand, third hand, whatever. And the longer you stay on, the bigger the risk. And of course, the higher the doses you use, the higher the risk – just like any drug, let alone a stack of drugs.

Imagine if you took a whole bottle of extra strength Tylenol to ward off aches and pains and headaches, and you did it every single day. Could you rationalize this strategy? Sadly, this is what a lot of steroid users do.

The mental gymnastics these long-term steroid-using guys do when they experience health issues is beyond my comprehension. They’ll bend and twist and stretch facts and figures to any length just to be able to say things like, “Yeah, I had a cardiac issue, but the research says it wasn’t the steroids. It couldn’t be!”

Worse yet, this industry’s members are complicit in pretending there are no major consequences at all to dumping massive physiological doses of drugs into their bodies. It’s not rational. In fact, to my mind, it’s downright creepy.