Once upon a time, if men wanted to compete in a physique competition there was only one category: bodybuilding. The same was true for women.

These days, women can compete in bikini, figure, fitness, physique, and bodybuilding. The posing and related requirements are different for each, but the main difference is obvious: muscular size.

But in 2015, something changed: the Ms. Olympia title wasn't awarded to anyone. It was dropped.

Rewind back to 2005. The IFBB introduced the infamous "20 percent rule." In a memo, they asked female bodybuilders to decrease the amount of muscularity by a factor of 20 percent.

They didn't say, "Hey, ladies, back off the drugs, would ya?" or "The audience is shrinking because a lot of people, even bodybuilding fans, think you look kinda gross." But the message was clear.

The question is, was it the muscularity that was the problem or, for lack of a kinder term, the "man face?"

There's been a lot of banter lately about the facial attributes some female bodybuilders adopt when they're in contest shape.

Sucked out, drawn in, sunken eyes, veins in their foreheads, sharply angled jawline, a bigger nose, and a general coarseness to their dark orange skin that makes an oil tanker's mooring rope look silky -- kinda the way their voices sound too.

Such discussions tend to be particularly unkind.

Inevitably, there will be those who react rather defensively to the issue, particularly if they happen to be one of those women out there on stage sporting such a mug.

But the truth hurts.

That doesn't mean I necessarily need to say it, but then we'd be ignoring something that is quite literally attached to the giant pink amazon in the room: the "man face."

It's a trending topic in the wake of the cancellation of both the Ms. International and the Ms. Olympia. Could this "condition" potentially be part of what's contributing to the decline in women's bodybuilding?

"It's not a beauty contest," we hear them say. But that's not entirely true.

Bodybuilding is all about beauty. It's when we get away from beauty that we get compromised aesthetics, bad symmetry, and big guts.

As far as the women go, bodybuilding has been flogged with an ugly stick. And now women's bodybuilding is going away.

When Corey Everson was Ms. Olympia from 1984 to 1989, the contest was often held in Madison Square Garden in front of a sellout crowd of screaming fans. Thirty years later and it's a sideshow at the Olympia expo, or at least it used to be.

At first pass, this makes me the bigot misogynist, but it is what it is... or was. It's not my fault women's bodybuilding is going away, I'm just saying what happened.

Going into why it happened really makes the goop in the pot get sticky and beg to be stirred.

There's no shortage of dudes raring to charge at the opportunity to voice their views on femininity and how female bodybuilders have gone about destroying it, and ultimately, their sport.

However true that may seem on the onset, in reality, no man has the right to say that. Personal femininity is defined by each woman for herself and of herself; even if what's staring at her in the mirror has developed a man face -- five-o'clock shadow and all.

Even the seemingly gnarliest of females have an aspect of femininity. As long as she has a va-jay-jay and all X chromosomes, she could make a vintage cigar store Indian look like Cameron Diaz and somewhere in there is going to be a vestige of what makes her feel like a girl.

Now, obviously, there's a general consensus of what we find feminine, attractive, admirable, etc. It is those attributes that attract an audience willing to support women's bodybuilding.

Say what you will, but the fact remains that a late 80's era Ms. Olympia contest could sell out the Felt Forum while today's Ms. Olympia has already gasped her last breath. Can't argue with history.

Issues of femininity aside, a female bodybuilder, even with extraordinary muscle, could be hot as hell if her face weren't busted.

The degree and pursuit of muscularity has created a facial and physical image no longer appealing to enough of an audience to support it.

This declining interest is what lead to the top two IFBB women's bodybuilding events being canceled. Apparently, among other undesirable attributes, there were a lot of busted faces up there.

If the top ten of the Ms. Olympia sported a row of faces that looked like the bikini division, Ms. Olympia would probably be alive and well today.

By the same token, if the top ten of every bikini contest had bodybuilder faces, it would go away too.

I'm not saying that all of the bodybuilding pros are ugly. That's such an ugly word. What I am saying is this: the Corey Everson-era bodybuilder that sold out the Felt Forum would today compete, probably, in figure.

During the course of this evolution, the IFBB has created bikini, fitness, figure and physique, gradually paving the way for the bodybuilders to put more and more distance between them and what's considered attainable and desirable.

And they did a great job. They freaked the Ms. Olympia right out of existence.

It's within such an extreme that the ultimate condition of a female bodybuilder's face can get wrecked if she's not careful. That's some tradeoff considering what's at stake... or was at stake.

Prolonged hormone abuse among women tends to cause the ears, nose, brow line and jaw to grow, much like a man's. But that's not the whole story.

Each on their own might not necessarily pose a threat to a woman's facial attributes, but piled one on top of the other, as would be the case with a competitive bodybuilder, and she could end up with a face that's a show stopper. Literally.

Right off the bat, the general structure of female skin is thinner and contains less collagen than a man's skin. This is why women tend to age less gracefully than men.

The older a female competitor is, the greater the propensity for man face. The rapid aging of a woman's skin is the basis upon which we get gnarlier and gnarlier renditions of man face as the other contributing factors are piled on over the years of a competitive career.

Because women carry more subcutaneous fat, especially on their glutes and hamstrings, they have to diet really hard to lean out those areas to the current expectation. This puts and awful strain on her face.

A diet strict enough to striate a woman's hamstrings is going to affect her facial features. One would need to travel back in time and visit Auschwitz to find a more scary rendition of facial architecture.

Such repeated forays into the land of shreds will etch deep lines into a woman's face that no amount of Restalin is going to fill.

Facial hair is a direct side effect of some of the drugs many female bodybuilders use. Some women shave off the hair, some use laser, but the fact remains, it's there.

If only the hair destined to grow on the face would only grow on the head! Who says God doesn't have a sense of humor?

Take off the ubiquitous wig, add the five-o'clock shadow to the deep furrows where cheeks used to be, and you approach the kind of face not even a mother would love. But it can get worse.

Sebum is a skin oil we secrete that makes the skin soft and supple. Men tend to secrete more than women, but when a woman hits menopause it really dries up.

This causes the skin to look coarser and drier as the woman ages. Adding testosterone to a woman mimics some of the signs of menopause -- depleted levels of sebum is one of them.

Women using male hormones will likely secrete less sebum and therefore have drier, older looking skin. Remember, to begin with, women have less collagen in their skin. Combine this with their thinner skin and less sebum, add male hormones, and the condition is exacerbated.

So basically we have a situation where women are naturally predisposed to dry, coarse, thin skin as they age.

Magnifying those characteristics with drugs, both anabolic and ancillary (clenbuterol for example, used in contest prep to assist fat burning) really has a leaning effect on the face.

Add over-dieting to the extreme level required today and there's little hope in getting around man face. Put all of these deleterious conditions together and you have a recipe for something that most people will find socially repugnant.

Given the paltry pittance awarded even to the winner of the top IFBB shows, and the grievous hindrance to her beauty, one can only speculate, why?

Interestingly, there is a subculture that finds these extreme cases of masculinized women attractive and/or desirable. We tend to label these people "schmoes" -- men who sexually fetishize female bodybuilders.

I used to look at these men in disgust for their perverse nature, booking private sessions for "posing" and "wrestling" and other general kinkiness. But, in respect to the female bodybuilders out there still intent on pushing the envelope, I'm going to change my mind.

These guys have shown their worth in saving some semblance of the upper echelon of female bodybuilding by putting their money where their whack-off lube is.

In 2015, there's a new show for top female pros called Rising Phoenix. Promoted by Tim Gardner and supported financially by the schmoes, this show offers the opportunity to fatten the bank accounts of the erstwhile disenfranchised female pros with a $50,000 prize plus a Jeep worth $55,000.

This beats the top Olympia prize in its heyday. I see this as potentially damning for numerous dermatologists and a boon to the juice sellers.

Looks like man face is in for a nice payday. And that's a very good thing.

We all deserve the opportunity to pursue our dreams and aspirations. And it's always nice to have a venue in which to showcase and be rewarded and recognized for your effort.

It doesn't matter if the masses accept it, just as long as enough do to support it.

If such promotions continue and female bodybuilding becomes fan supported, then it will have proved that it is in fact not a beauty contest, and the women so inclined can just go for it. 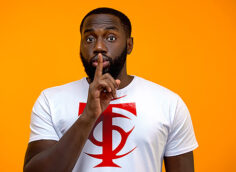 What's something you're not supposed to say about fitness even though it's true? Here's how four experts answered that question.
T Nation September 21

Are you the person in the gym that other people secretly hate? You are if you break these rules.
Opinion, Strong Words
John Romano July 21