Real life has largely failed to duplicate Hollywood's fantasies, though, thus disappointing the military and bespectacled science-fiction geeks alike. Sure, there are a smattering of reports about soldiers being outfitted with biometric sensors, centipede-like armor, and helmets that augment vision and hearing, but nothing so much on the genetic or chemical front.

Of course, amateur historians, usually with beer in hand, often like to tell stories about how Hitler's special forces were chemically fueled by steroids, which were in their chemical infancy during World War II. There's no real evidence to substantiate that Nazis used steroids, though. (Even though methamphetamine use among soldiers was apparently common.)

That doesn't mean no one's ever tried it since WWII, though. Perhaps surprisingly, the Australian government did sanction, briefly, the practice of trying to turn their soldiers into real-life versions of Captain America through the use of steroids.

It happened in 1998 after Australian authorities discovered that a substantial number of soldiers in their elite fighting forces were using steroids on their own to muscle up, boost stamina, and increase aggressiveness.

Rather than recoil in horror, the authorities actually embraced the idea and provided guidelines for the use of steroids. They figured that anything that could increase the survival rate of their soldiers was A-OK.

Unfortunately, the Sydney Morning Herald got ahold of the information and wrote that this rampant use of drugs could lead to a compulsory doping subculture.

Unwilling to deal with public scrutiny, the military director of personnel operations felt compelled to change positions and declare that, "Drug involvement leads to reduced performance, health impairment, presents a security risk and has the potential to endanger the safety of our soldiers." (1)

And that was that.

The subject of giving soldiers Steve Roger's "Super Soldier Serum" or its real-life equivalent hasn't come up all that much since, so I was thunderstruck to see a guest editorial on the topic in the current issue of the Military Times. (2)

In it, the authors wrote that researchers at the 2016 Consortium of Health and Military Performance symposium had outlined five primary concerns that the military should pursue. Mind blowingly, at least to me, was that one of these concerns was the further exploration of steroid use, including the costs and benefits.

It seems the interest in steroids arose from an anonymous survey of U.S. Army Rangers, one-fourth of whom admitted to using some sort of steroid or performance enhancing drug.

The authors of the editorial, Lt. Col Chad Peltier and Kyle Pettijohn, PhD, then went on, without hyperbole, to write about the pros and cons of giving steroids to soldiers. Unfortunately, the authors didn't seem to know steroid arcana as well as the average competitive bodybuilder. Otherwise, their list of cons might have been a little bit shorter.

Peltier and Pettijohn dutifully go on to describe the results of two studies that examined the effects of testosterone on elbow extension/flexion, 1RM squat, lean mass, and other time-honored steroid effectiveness parameters.

As might be expected by any steroid savvy bodybuilder, the results were all positive, giving credence to the notion that testosterone injections might augment the fighting capabilities of SEALS, Marines, Paratroopers, and Rangers, in particular.

The bulk of the editorial, though, addresses the possible negative effects, both physical and behavioral. They go through the usual litany of possible medical complications like liver damage, testicular atrophy, decreased sperm production, and gynecomastia, worrying that "the effects might not reverse even with cessation of steroid use."

They further worry that the drugs could lead to inappropriate aggression, aggression that didn't limit itself to combat situations. After all, what good is an attack dog if it attacks its master, beats up other soldiers, or creates mayhem when mayhem isn't required?

Still, Peltier and Pettijohn are sufficiently steroid savvy to posit that the bulk of the noted side effects of steroids might be from using multiple drugs simultaneously, high doses, impurities, duration of use, and pre-existing medical or mental issues.

But their most salient point is whether steroid use would ever be deemed mandatory:

"This is a complex issue; research will almost certainly show negative health consequences of steroid use in some individuals. Should military commands require soldiers to use a potentially harmful drug? Military commanders already put soldiers in dangerous situations where consequences, life or death, are much more immediate concerns that the potential side effects of steroids."

The authors put in a lot of thought about the impact steroids would have on women, as "testosterone-based PEDs will have more adverse effects in women than men."

Female soldiers would definitely gain much the same comparative advantages as males through the use of steroids, including increased muscle mass, strength, and endurance. However, they could also experience clitoral hypertrophy, breast atrophy, menstrual irregularities, unwanted hair growth, and a deeper voice, much of which would be irreversible.

Given these adverse effects, would it be fair if female soldiers had to take them? But what would be the repercussions of not using them? All combat positions are currently open to women, which might pose a problem to women who didn't choose to use steroids:

"If the use of steroids becomes a de-facto necessity to serve in certain roles, women will have to compete with steroid-enhanced males for these positions. The adverse effects of steroids might preclude women from using them, which may make them less competitive for serving in these elite positions."

Peltier and Pettijohn concluded their potentially revolutionary paper with the same cautionary tone that's endemic to all such scholarly papers:

"Steroids represent a potentially useful tool to increase the performance of military personnel, but the current state of knowledge makes the value of this tool, and its associated cost-benefit trade-offs, unknown. Further research is required before any definitive conclusions can be reached."

Their conclusion was sober and responsible, as befits any government employees writing for a medical journal. I, however, am not bound by such constraints. Here's my take on the subject.

It's terrific and long overdo that Peltier, Pettijohn, and the researchers at the 2016 military health and performance symposium broached the subject of steroid use in the military.

The Australian armed forces had it right – anything that promotes the survival of fighting men and women is a tool worth using, as long as that tool is used safely and correctly, and therein lies the rub.

There are, however, particular steroids and protocols that might alleviate some/many of the health concerns associated with turning soldiers into super soldiers, but first, let's define exactly why we're trying to chemically enhance soldiers.

We're not trying to give them the mass of competitive bodybuilders who, because of their sheer mass, would invariably be slower and have less endurance than even the average soldier. Instead, the goal is to enhance combat capability by moderately increasing strength and endurance while maintaining the health and functionality of the human "machine."

This is infinitely doable.

The first is a little-known steroid known as testosterone undecanoate (TU). It's manufactured by Organon and its trade name is Andriol. It's never been available in the United States, but serendipitously there's a new drug application in the FDA database (number 206089) for oral TU capsules to be sold under the trade name Jatenzo.

Andriol, or possibly Jatenzo, is unique among steroids because it's directly absorbed from the gastrointestinal tract into the lymphatic system, thus avoiding "first pass" hepatic accumulation and inactivation. In other words, it won't FUBAR the liver at all. You can also store it at room temperature up to 3 years without noticeable degradation.

The drawback is that it comes in 40-mg. oil filled capsules and it has a low absorption rate. You'd probably have to pop 12 or more a day in two or more daily doses, accompanied by a high-fat meal.

(Access to high-fat meals shouldn't be a problem, given that the average MRE contains about as much fat as a grease trap in the average KFC. Take "Beef Ravioli in Meat Sauce," for instance. It contains 1654 calories and 67 plumbing-clogging grams of fat.)

Still, those high DHT levels could potentiate the rest of the negative side effects associated with most steroids (increased body hair growth, increased aggression, etc.).

TU injections might be a better alternative because they, too, possess a seemingly unique attribute: One shot of 1,000 mg. of TU can raise testosterone levels for up to 10 weeks, which, in the testosterone ester world, is an unparalleled length of time.

Giving a shot every 10 weeks would be a lot more convenient than the typical weekly or bi-weekly shots, which may be impossible for soldiers in combat situations or in conditions where maintaining sterile conditions would be difficult.

Another steroid that should be considered for use by the military, particularly for women, is oxandrolone, generally known by the trade name Anavar. It, like TU capsules, is taken orally.

While it's roughly three times as potent as testosterone, it generally provides strength without much bulk. Of main interest is that the drug isn't affected by the 5-alpha reductase enzyme, meaning it doesn't convert to estrogen and, as such, is far safer than other anabolic steroids.

Of special note is that it rarely causes virilization in women, meaning that it doesn't usually deepen womens' voices, increase their amount of body hair, or affect clitoral size.

It is, however, like all oral steroids, toxic to the liver, but far less toxic than most of its chemical cousins. Potential toxicity might be avoided if users refrained from alcohol and other medications and limited use to 8-week periods.

Clearly, there are excellent steroid options available to potential chemical warriors. Most negative side effects could be thwarted by judicious use of these drugs, along with other accompanying drugs that prevent aromatization to estrogen (anastrozole, letrozole. etc.).

While the occasional steroid-using soldier might experience things like elevated cholesterol and other easily reversible, potentially health compromising side effects, the increased physicality and general combat readiness offered by these drugs would, by most estimates, offset the transient negative health effects.

Exact protocols would have to be outlined, but ultimately, the concept of the Super Soldier is ready to become reality. The press will lecture, the talking heads will hector, and mommas will cry that we're poisoning their babies, but don't heed the complaints of the uninformed. 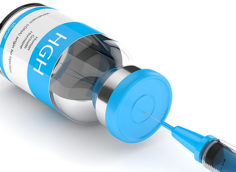 Growth hormone isn't what it's cracked up to be. Besides, it causes a side effect that some bodybuilders probably haven't considered. Info here.
Health & Longevity, Living Better
TC Luoma October 8 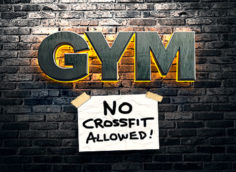 Is there an ideal way to structure your training to get the most out of your hormones? Yep. Check this out.
Bodybuilding, Testosterone Optimization, Training
Dan Trink June 6 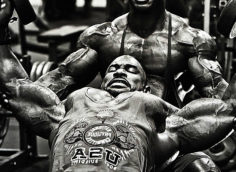