Charles Yesalis knows all there is to know about the steroid
game.

One of the world's leading experts on the use and abuse of
performance-enhancing substances in professional and amateur
athletics, Dr. Yesalis has testified before Congress on legislation
dealing with the control of anabolic steroids and growth hormone
abuse, and has been a key consultant for the U.S. Senate Judiciary
Committee, Drug Enforcement Administration, NFL Players
Association, Food and Drug Administration, Centers for Disease
Control and Prevention, U.S. Olympic Committee, National College
Athletic Association, and the National Strength and Conditioning
Association, to name only a few.

He's the author or co-author of several authoritative books on
steroids, including The Steroids Game, which focuses on
education, prevention, and intervention of anabolic steroid use in
athletics.

Depending on which side of the contentious issue of
performance-enhancing substances you happen to be on, you might
think this man is either your most stalwart ally, or your deadliest
foe.

You'd probably be right either way. Like most contentious
issues, the anabolic steroid game has more than just two sides.
Neither an advocate nor an ardent abolitionist, Charles Yesalis is
uniquely qualified to view the game from all sides.

Currently a professor of health policy and administration of
exercise and sport science at Penn State, Dr. Yesalis was kind
enough to share his opinions on the matter with Testosterone member
Chris DiEugenio. Here's how it went down.

Testosterone: How did you first become involved with the study
of steroids in sports?

Dr. Yesalis: I was a volunteer strength coach with the
University of Iowa wrestling team. The athletes used to ask me
about steroids all the time, and I simply didn't know the answers
to their questions. So I had to do what everyone did back in the
Dark Ages before the dawn of the Internet: I went to the library.
The more I researched anabolic steroids, the more I was struck by
just how much we didn't know about them. This really intrigued me,
and stimulated me to do even more, deeper research.

Testosterone: You've been one of the leading voices in the
crusade against anabolic steroids and other drugs in athletics. Can
you explain your major objection to them?

Dr. Yesalis: In 1980, I chaired a panel of scientists that
debated the problem of doping in sports, and we concluded that
steroids pose primarily an ethical, rather than a public health
problem. The biggest issue is that using steroids is against the
law, and against the rules of sport. These rules are what define
sports, and using drugs to gain an advantage is tantamount to
cheating.

Listen, if I could bring a Glock 9mm onto the field during a
football game, I would have a distinct advantage over even the
biggest player on the other team. I could just shoot him. But I'd
be breaking the law, and violating the rules of the game. It's the
same thing.

Testosterone: So steroids pose less of a health risk than most
people believe?

Dr. Yesalis: As I mentioned in my book, the health risks have
been greatly overstated. Hypertension, for example, is widely
claimed to be a side effect of taking androgens. This is one of the
most exaggerated claims. And as for users becoming sterile, there
has never been a single reliably documented case of irreversible
infertility as a result of androgen administration.

Think about it: medical science has been using steroids safely
in a clinical setting for the last 70 years. Anabolic steroids can
be used relatively safely, but at even low doses they can have side
effects. No drug, supplement, or substance is totally "safe." Heck,
you can even overdose on water.

My personal opinion is that if one uses these drugs
at high dosages, over a long period of time, then yes, they're too
powerful to fool Mother Nature. And it's the oral (hepatoxic)
steroids that can potentially be the most harmful. But should they
be placed in the category of "killer drugs"? Absolutely not. Not
even close.

Testosterone: And what about reports of so-called steroid rage?

Dr. Yesalis: The reporting is shoddy. The problem is that we
live in a sound bite culture. I know of only a few exceptional
journalists out there. Use of some drugs may induce a "rage,"
but in only a very small percentage of users, and it's these
isolated incidents that are reported.

Another result of this shoddy reporting is that the average Joe
thinks the steroid issue is all about Testosterone and HGH, because
those are the only two names he hears in the media. Those of us who
are informed about the subject know that the hormonal milieu is
vastly broader than that, but the press predominantly harps on
these two. This kind of wobbly portrayal of steroids indicates to
me that there may be some hidden agenda involved with "steroid
stories."

But let me put this whole "rage" thing into perspective for you,
Chris. You've been to Penn State home games. If you told me you've
never seen outbursts of "rage" at a football game, then I would
have to call "bullshit." They happen all the time. And that's not
steroids, that's alcohol. It's not even in the same
ballpark."

Testosterone: Judging from the organizations you're affiliated
with, and also from reading past interviews you've given, it seems
that your primary goal is keeping these drugs out of the hands of
young people. What can parents do to keep their kids off the
juice?

Dr. Yesalis: First, they should just relax. One of the biggest
issues with young people in sports concerns their often fanatical
coaches and parents. If a kid is constantly being told that he has
to do "whatever it takes" to win that game, or to win that
scholarship, or to get that start on the team, well, guess what?
That kid is going to do whatever it takes.

From a moral and ethical standpoint, how you raise a child will
determine that child's behavior. If you instill certain standards
in them, then they won't cross certain lines. If parents want to
make sure that their kids are not crossing lines, they need to be
paying attention to who coaches their children, and what's being
told to them, and then they need to step back and re-examine their
own relationship with their kids as well.

Testosterone: In response to a study published in 2000, stating
that usage of steroids among 8th graders had become as prevalent as
it was among high school seniors, you were quoted as saying, "It's
scary for anybody to use these drugs, but in particular
women and children." Just to clarify, though, you do believe
that a healthy male adult can potentially use anabolic steroids
safely?

Dr. Yesalis: It would be dishonest to answer
"no."

Testosterone: Okay, the next one's a bit of a touchy subject,
for obvious reasons. You've stated "I have never met a steroid user
who didn't use supplements first." Does this imply that you're
anti-supplements?

Dr. Yesalis: No, I am not anti-supplements. There are two
types of supplements: health supplements and performance
supplements. And then there's that gray area between the two, when
performance supplements also provide health benefits, like
creatine. I don't think that there is any problem with creatine or
protein supplements, but I do think that younger athletes should
probably forget about these things.

Testosterone: Now let's move to the opposite end of the age
spectrum, and talk about hormone replacement treatment. In his
book, Dr. E. Barry Gordon has linked free testosterone deficiency
to a whole range of diseases. What's your view on
this?

A serious look at a serious problem.

There are potentially some huge benefits to replacement therapy,
such as increased bone density, sense of well-being, and sex drive.
However, I feel that the aging clinics are "low-balling" what they
consider to be optimal healthy hormonal levels.

On the other hand, this isn't a legal or ethical issue, more a
matter of "my body, my life, my choice." People can legally go and
get this treatment, just as they can go and get cosmetic surgery,
which potentially has worse and longer-lasting side effects than
steroids. The same argument can be, and has been, made for
abortion.

Testosterone: Okay, last question: do you see a real solution to
the drug problem in sports today?

Dr. Yesalis: No, I don't think so. The only real solution is for
the fans to stand up and say "we don't want to see any more doping
in sports." This hasn't happened, and probably won't. What this is
about, pure and simple, is entertainment. We like seeing
bigger-than-life people doing bigger-than-life things. The fans
have arguably created the market for these drugs.

So we can't totally place blame on the athletes for the drug use
in sports: it's part and parcel of the business of entertainment.
And the drug testing policy of professional sports organizations
amounts to little more than a policy of plausible deniability. I've
said it before: I could take an M-1 tank and drive it, at night,
through the loopholes in NFL drug testing, without even scratching
the armor plates.

These organizations, all they do is create facades and special
effects worthy of a George Lucas film: just sophisticated ways to
convince the average fan that there is no issue to be
seen.

"These aren't the drugs you're looking
for."

The drug problem has always been with us, and it always will be.
Athletes have always used performance-enhancing substances, from
amphetamines to steroids, and amphetamines are by far more
dangerous. It's human nature to try to obtain every possible
advantage for success. If there were a drug available that would
dramatically increase the ability of University faculty to get
grants, you'd better believe they'd be injecting their butts with
it in front of Old Main.

Faculty members one hour before submitting their grant
applications.

Testosterone: And with that happy mental image, I think we'll
wrap it up. Thank you very much, Dr. Yesalis. 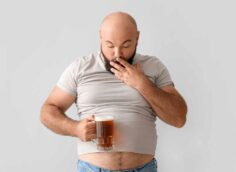 Are you a fitness journey dropout? Did you make it on this list? Don't worry, you can fix it. Warning: This may sting a little at first.
Motivation, Opinion, Strong Words
Calvin Huynh July 3