A decade ago, testosterone replacement therapy (TRT) and steroids in general were a taboo subject. Society was witnessing steroid witch hunts in baseball and cycling, and lots of uneducated politicians were claiming that these "evil" drugs were ruining America.

These commercials piss me off, not because I don't believe in the benefits of TRT, but because I know that many men who have legitimate low T are at the end of their ropes. They're facing depression, fat gain, muscle loss, and low energy, and they're willing to do anything they can to fix it. Framing TRT as a "quick fix" for these issues is at best, misinformation, and at worst, downright predatory.

Yes, therapeutic use of testosterone and other hormones should be an option for anyone with a deficiency, and TRT can alleviate the symptoms of low T, but it's neither a quick fix nor a cure.

If you're testosterone deficient, it means that there's a malfunction somewhere in your body that's causing a breakdown in production. While taking exogenous testosterone will raise your T, it won't fix whatever's causing the deficiency in the first place. That root cause, T replacement or not, is likely something that will affect your health, performance, and longevity if it's not addressed.

So if you're currently taking TRT, thinking about TRT, experiencing symptoms of low T, or want to avoid having low T, pay close attention to these underlying causes.

One thing you should know prior to starting any TRT regimen is whether or not you're upregulating aromatase or sex hormone binding globulin (SHBG). If lab tests reveal you have higher than normal estrogen and/or very low free (unbound) testosterone, it's a good sign that you have high aromatase or high SHBG levels.

The Problem With Elevated Aromatase

Aromatase is an enzyme that's responsible for converting testosterone into estrogens. If aromatase production gets out of hand, much of the testosterone you manage to produce (or inject into your body) can potentially get converted into estrogens. This means that TRT could potentially backfire by raising your estrogen levels while your T levels continue to plummet.

You'll need to make sure that your doctor has taken precautions to prevent aromatization from occurring in your therapy. If not, you'll potentially get the exact opposite of what you were looking for!

For your long-term health, you'll also want to take measures to lower your aromatase production in general. Upregulation of aromatase occurs because of high levels of insulin, xenoestrogens (chemicals in the environment that mimic estrogen), and inflammatory cytokines (1).

The Problem With Elevated SHBG

SHBG is a protein that binds tightly to testosterone and decreases its bioavailability (3). This, in turn, can keep you from getting all the benefits you want from T, like building muscle, getting strong, and performing like a sexual superstar.

In fact, as TC Luoma pointed out in his article, How to Increase Your Sex Drive, scientists have actually found that your total T has no correlation with sexual drive. Rather, it's free testosterone that will have you standing at attention when duty and desire call.

How to Keep Levels of Aromatase and SHBG in Check

As with aromatase, high levels of SHBG can throw a wrench into any TRT strategy, and you need to address it in order to benefit either from exogenous testosterone or from your own natural supply.

These recommendations should help you avoid falling off one side or the other:

Ever wonder why your balls are located outside your torso? It's hardly the safest place. Well, nature has her reasons.

Leydig cells, the cells within your testicles that produce testosterone, are finicky little suckers. They don't do well with heat, so their location in the scrotum – outside your body – helps to keep them cooler than the rest of your body.

Leydig cells also don't do well with localized inflammation, be it acute or chronic (5). There is, however, another danger, and that's chronic systemic inflammation. If left unchecked, it can decimate Leydig cell function and obliterate your T production.

TRT may be the most viable option for those who've suffered too much Leydig cell damage, but you'll also need to address chronic inflammation if you want to function correctly.

How to Keep Leydig Cells Healthy:

When we think of testosterone production, most of us just think about the testicles, but they're really a cog in a much larger machine. T production actually starts in the brain when your hypothalamus produces gonadotropin releasing hormone (GnRH).

From there, GnRH travels to your anterior pituitary and coaxes it into releasing follicle stimulating hormone (FSH) and luteinizing hormone (LH). These hormones then travel into the bloodstream toward your testes, where LH stimulates your Leydig cells to produce testosterone and FSH aids in helping you to produce sperm.

To put this simply, anything that affects your brain health is going to take its toll on your testosterone production and reproductive health. Traumatic brain injury (TBI) can most certainly cause a breakdown in the HPGA axis (7, 8), and this could happen even with a mild brain injury (9).

So even if you haven't been knocked out to the point where you saw stars, a forceful impact could lead to a hormonal breakdown in the long run. Some scientists, like interventional endocrinologist Dr. Mark Gordon, believe TBI is one of the preeminent causes of suicide amongst US Military veteran populations (10). This is because TBI is known to cause heavy depression and PTSD-like symptoms among those affected.

Dr. Gordon's theory is that many veterans sustain low level brain injury simply from being shaken due to proximity to explosions and manning high powered automatic weapons. Though no large scale studies have been conducted to prove the theory, studies show that 85% of post 9/11 veterans who've committed suicide have never served in combat (11).

This has many rethinking whether it's depression from low level TBI and not emotional trauma that accounts for the very high veteran suicide rates of the past decade and a half. It's definitely within the realm of possibility, given that even borderline levels of testosterone are known to cause depression in men (12).

This type of dysfunction is one of the most complicated to fix due to the fact that the brain is the source of so many hormonal cascades. That means that a simple cycle of testosterone cypionate probably won't be enough to fix this serious issue. You'll need to find a doctor who's been specially trained for this type of breakdown.

If you're a veteran, you can also find assistance through the Warrior Angels Foundation, an organization that Dr. Gordon co-founded to help veterans obtain hormonal therapy for TBI. In the meantime, you need to take action to protect and heal your brain.

How to Maintain the Health of Your Noggin'

It's commonly thought that if you're chronically stressed, your adrenal glands spout out the hormone cortisol. Cortisol is produced from pregnenolone, which is also the mother hormone for testosterone and estrogen.

The problem, as it's commonly believed, is that if you're chronically producing cortisol, your body will use all of its pregnenolone supply to make more cortisol, which is to the detriment of DHEA production. Since DHEA is a precursor to testosterone, you end up with a shortage of testosterone. This is known as the infamous "pregnenolone steal."

No One Stole the Pregnenolone

This is where I'm supposed to write something about how our current "high stress" culture is killing you. Let's be real though, times are probably easier now than they've ever been in history. You don't have saber-toothed tigers chasing you, and you're probably not gonna be storming any beaches under machine gun fire in the next few months. Your physiology isn't so fragile that it'll get broken by an overloaded email inbox.

Luckily, as with most things in life that we try to fit into neat little stories, the science on the pregnenolone steal is also quite rickety. The problem with the theory is that it assumes we have a limited, single pool of pregnenolone where cells can simply steal it from other cells.

The thing is, cholesterol actually gets transformed into pregnenolone within cellular mitochondria, and there's no known pathway by which cells transfer pregnenolone to other cells (15). That means that cells can't rob pregnenolone from other cells!

Before my inbox gets filled with angry emails from the paleo folk, let me add this: Yes, high levels of cortisol production are known to correlate with lower DHEA production. Nevertheless, correlation does not mean causation.

Bottom line, there's no scientifically demonstrated mechanism to explain how high stress, in and of itself, leads to low T.

We do know, however, that studies have shown that high levels of circulating glucose and insulin tend to lower levels of DHEA production, and that type II diabetics have been shown to lack the enzyme that enables pregnenolone transformation to DHEA (16,17).

We also know that high levels of inflammatory cytokines increase cortisol production and reduce the pregnenolone-converting enzyme's ability to produce DHEA, at least in cows (18).

What all this points to is that the key to avoiding low T isn't in avoiding stress. Rather, it's in preparing your body to better handle stress by eating a proper diet and fighting inflammation.

How to Maintain HPA Axis Health

Remember, there are no quick fixes when it comes to optimizing hormones. Testosterone replacement may help you with some of the symptoms of low T, but there's still danger to your overall health from the underlying causes. Whether you choose TRT or not, your primary focus should always be on healing and protecting your body. 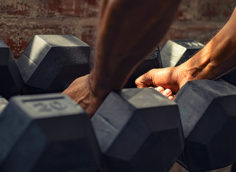 Get jacked by picking up a heavy thing and walking with it. Too simple and boring? Try one of these new variations!
Training
Nick Tumminello May 7

These monster sets are so tough you should only use them for three workouts in a row. Check 'em out.
Metcon, Tips, Training
Christian Thibaudeau March 23

The standard deadlift is great for strength, but it's missing something when it comes to hypertrophy. Try this variation instead.
Tips, Training
Dr John Rusin December 2 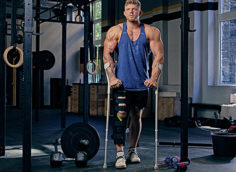 Here's are the four riskiest pieces of equipment in your gym, plus what you can do to stay out of the ER.
It Hurts Fix It, Training
Nick Tumminello April 24