Where Should I Stick the Needle?

A: While going subcutaneous (sub-Q) is almost unheard of among old time testosterone injectors and steroid users in general, it's actually the way to go if you're using small, TRT-sized doses (200 mg. or less).

Rather than sticking a large needle in your behind, you stick a small (26 gauge, 3/8" needle) on either side of your abdomen. This method appears to have several advantages:

To do a sub-Q injection, just swab an area of skin on either side of your belly button. Swab in concentric circles, starting small and working your way out (it physically pushes away any bacteria that the alcohol failed to kill).

Then inject the needle at about a 45-degree angle – no need to pinch the skin. Fully depress the plunger, pull out the needle, and you're good to go. Here's Dr. Crisler with an injection demo: – TC Luoma

Hunger and the "Pound of Veggies" Misfire

Q: I'm trying to lose fat but my appetite is off the charts! Everyone says to just pack in the low-calorie veggies, like a pound per day. I'm doing it, but I'm still craving more food. Any advice?

A: First, you're not alone. Check out this recent survey from T Nation's Instagram: 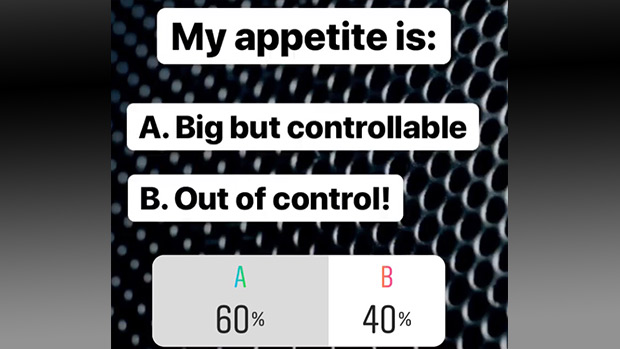 Hunger is a complex issue; it's more like algebra than basic addition and subtraction. But let's get the math out the way first.

Eating under your maintenance level of calories – pretty much mandatory for fat loss – will make you somewhat hungry. You're also fighting off psychological habits and triggers as well, like snacking when watching TV. There's always going to be a certain amount of "suck it up and tough it out" required when dieting.

But let's make sure your caloric deficit isn't too deep. While studies show that athletes can eat about 25 percent under maintenance without losing muscle or tanking their hormone levels, that deficit will leave you pretty damn hungry.

A rough guide for estimating maintenance caloric intake is to multiply your bodyweight times 15. To achieve a more-doable 20 percent deficit, multiply that number by .8.

The point is, no "hack" for suppressing appetite is going to work if you're eating an anorexic 900 calories a day. Shoot for a modest deficit and be patient.

About That Pound of Vegetables...

I understand where the diet gurus are coming from with their "gorge on low-calorie vegetables" recommendation. But it doesn't work very well for a lot of people. Why? Because hunger isn't as simple as having a full stomach vs. an empty stomach. Mechanical hunger is only part of the puzzle.

While eating a pound of green vegetables – or even two pounds as some recommend – every day will fill your stomach, it may not satisfy your appetite. Why? For one reason, not all veggies send your brain the "I'm full" signal.

Certain brain cells called tanycytes control appetite. These cells detect nutrients and inform your brain about the food you've eaten. And these cells respond to abundant amino acids, not lettuce.

If you're worried about the calories that come with those foods, try supplementing with arginine and lysine when dieting. And yes, eat your veggies, just in non-stomach-distending amounts.

Other Ways to Control the Appetite

Lack of sleep messes with the reward centers of your brain and disrupts your internal body clock. This affects the regulation of leptin (the satiety hormone) and ghrelin (the hunger hormone). In short, bad sleep gives you cravings, usually for calorically dense foods.

As T Nation contributor Dr. Jade Teta has noted, "Protein is the king of reducing hunger. If you want to reduce your hunger, then amplify protein intake above all else."

The old rule of eating about a gram of protein per pound of bodyweight works for most moderately chubby people. A little over 1 gram per pound is fine too since it's very difficult for your body to store excess protein compared to carbs and fats.

Protein powders with a good amount of thick micellar casein really stick to your ribs. Metabolic Drive® Protein is a top choice. If you're having a late-night craving, a thick 21-gram protein shake (one scoop of Metabolic Drive®) will get you through the craving.

Eat the RIGHT kinds of fiber

This is what the "eat two pounds of veggies" people are trying to accomplish. But soluble, gel-like fibers have the most powerful hunger-suppressing response – and in fact may be the only appetite-killing types of fibers (2).

Dr. Teta notes: "These types of fiber coat the digestive lining, interacting with L and K cells which then signal, through hormones like GLP and GIP, to turn down hunger."

You can find all these in powdered supplement form. Mix a couple of them up with water and consume between meals or 30 minutes before a meal to blunt appetite.

You know how pregnant women get weird cravings? One theory is that they're lacking in a certain vitamin or mineral.

Cravings during your fat-loss diet are somewhat related. Some diets have you really limit food variety, which may lead to a deficiency in certain vitamins or minerals. Your body is "asking" for what it needs, and your taste buds make suggestions... usually bad suggestions because those little bastards are very self-serving and not that smart.

Bill Lagakos, PhD, introduced me to the term, "micronutrient deficiency-induced leptin resistance." That theory could explain why it's so easy for the average North American to overeat – all that processed food is full of calories but lacking in vitamins and minerals, so their bodies keep asking for more food, searching for those missing micros.

A dieter with limited food variety could suffer the same problem. To cover your micronutrient bases, use Biotest Superfood, a blend of 18 berries, fruits, and vegetables. 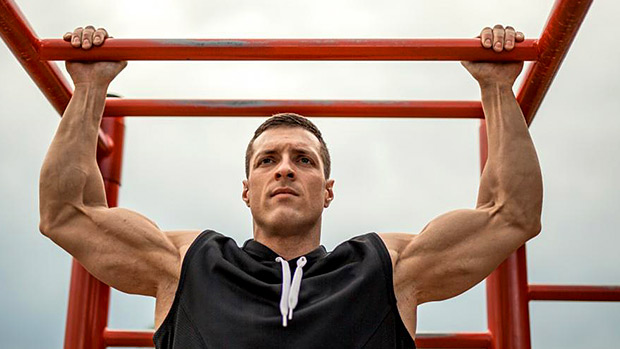 Q: You can only do three exercises – one bodyweight exercise, one kettlebell exercise, and one dumbbell exercise. What are they? Go.

For the bodyweight exercise, I'd choose pull-ups as they're aptly nicknamed "the upper body squat." You could probably develop a pretty good torso and arms by doing nothing but pull-ups.

For the kettlebell exercise, I'd go with swings, mostly because of a research study I wrote about in The Absolute Best Way to Burn Calories. It showed kettlebell swings, done in a particular manner, burn roughly 20 calories per minute, which is astronomical when compared to most other calorie-burning exercises. 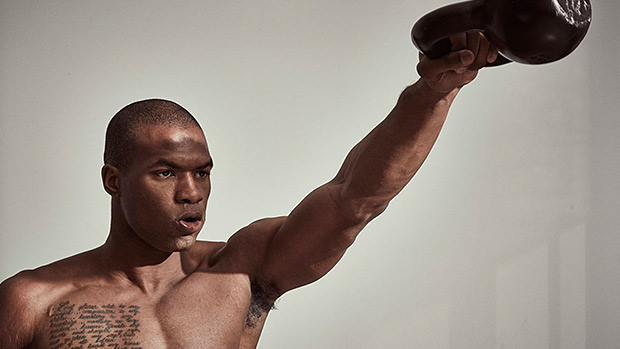 For my one dumbbell movement, I choose goblet squats. To do these, you hold a dumbbell against your chest, vertically, grabbing on with both hands just underneath the innermost plate (like you're in King Arthur's court and you're holding a fat goblet against your chest). Then you just squat down until your elbows slide past the inside of the knees.

So there. Pull-ups, kettlebell swings, and goblet squats. What do I win? – TC Luoma 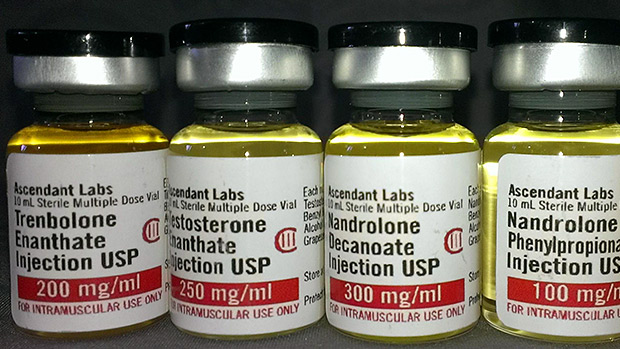 Q: Why does it seem to some extent you endorse steroids? Maybe I'm reading something wrong here, but it seems you guys actually promote them sometimes.

A: I've personally written most of those "steroid promoting" articles, but rather than write an essay, I'll just give you my reasons for being interested in them in list form:

And if you don't believe that, consider the economic reason we'd avoid "promoting" steroids: With the exception of protein powder, guys who use steroids generally don't buy as many supplements as "clean" lifters, and of course we want people to buy Biotest supplements. – TC Luoma 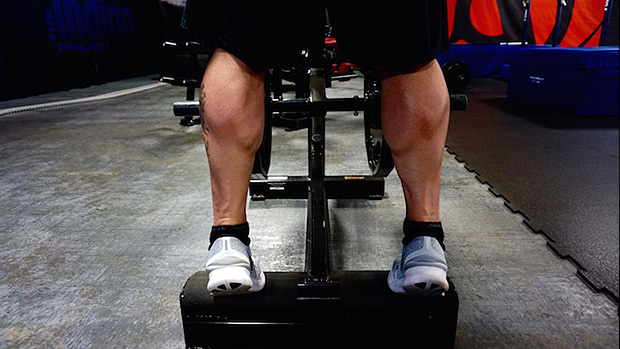 Q: I train my calves 3-4 times per week and they're still small. Any advice?

A: Pants. The answer is pants.

Just kidding. Okay, there are some genetic factors involved: muscle fiber makeup, insertion points, etc. Some mutants never train their calves and have monster calves anyway. And some folks have to train the hell out of their calves just to make them average.

So, here's a quick roundup of what we know about effective calf training:

Frequency rules, with most coaches recommending a minimum of 3 days a week of calf training, usually more. Sounds like you have that covered.

Do a lot of work

That means volume: lots of sets, lots of reps, and a few different exercises.

One study of runners showed that athletes who ran 59 miles a week had 20 percent larger calves than those athletes running "only" 15 miles a week.

No, you don't have to start running 59 miles a week, but this does show that the calves need a lot of volume to grow. Three sets of 10 at the end of leg day just isn't enough for non-genetic mutants.

That would be the gastrocnemius and the soleus. The problem here is that most people just choose one calf exercise, typically the standing or seated calf raise. But you need both.

This is where most people go wrong. Try this:

If you're already doing all of that, try something crazy. I picked this superset idea up from Charles Poliquin:

Repeat 2-3 more times and have fun getting out of bed the next morning. – Chris Shugart 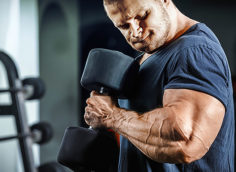 Trick your nervous system into allowing you to do more reps by literally sticking your neck out.
Training
Michael Wohltmann September 3
I'll have to admit that my mind was elsewhere. We were all sitting in the lounge at the Los Angeles Strength Seminar and everyone was drinking wonderful things like beer and bourbon, often together. One lovely young woman was drinking a wine spritzer. I can allow that, if you're a lovely young woman.
Training
Dan John October 19