I’m not a freak, not by a long shot. By competitive bodybuilding standards, I don’t cut it.

It probably has just as much to do with personal choice as it does my height or my unreasonable reluctance to marinate my ass with a lot of illegal chemicals. Since I’m well over six feet tall, I’d have to weigh about 30 pounds more to even come close to the modern, hulking, competitive bodybuilding aesthetic.

What I’m saying is that I’m no human fireplug, but that’s perfectly okay with me. I like wearing a suit without looking like a toll booth with a termite fumigation tent thrown over it. I like being able to pass through a doorway without first having to strip down naked and cover my body with Crisco.

If I had to describe my body type or physique, I’d have to say I look more like a football player, maybe a tight end or the rare in-shape quarterback. I am, however, by regular-folk-on-the-street standards, a big guy, and, more importantly to me, at least, an in-shape guy.

I’m also big enough to be somewhat of a physical novelty to my non-lifter buddies – probably a lot like a girl with really big breasts is to her friends, only without the eventual eating disorder. They’ll sometimes greet me by “making a muscle” with their arm or, worse yet, hitting a terribly sad most-muscular pose.

Stupid jokes aside, they tend to call me when they need to move a sectional couch.

Likewise, I’m just big enough that strangers look at me and think “meathead.” They occasionally try to engage me in conversation by talking about sports or, since I live in Southern California, surf conditions.

Mongo know very little about ways of world, so Mongo thank you for trying to relate to him on simple level, but Mongo hungry now. Mongo want to know if you have any lunchmeat in your pocket.

I’m sure a lot of you fall into the same sturdy, dreadnought of a boat.

The thing that bugs me the most, though, is the line the non-lifters lay on me at least a couple of times a year. It’s their rationalization for having bodies that are virtually devoid of muscle and could easily be mistaken for one of the spindle-shanked, cadaverous teenage leads in almost any British comedy on Netflix.

But I don’t say that to them. I usually respond with a tight-lipped smile and continue on my way, but in their minds, they assume I’m on my way to a marathon 3-hour workout followed by a trip to the wheat grass stand to quaff a liver and whey protein shake.

Mongo would someday like to have job other than stock boy at Trader Joe’s, but Mongo have no time. Working out very important to Mongo.

It’s okay. It’s annoying, but it doesn’t diminish my life or anything. 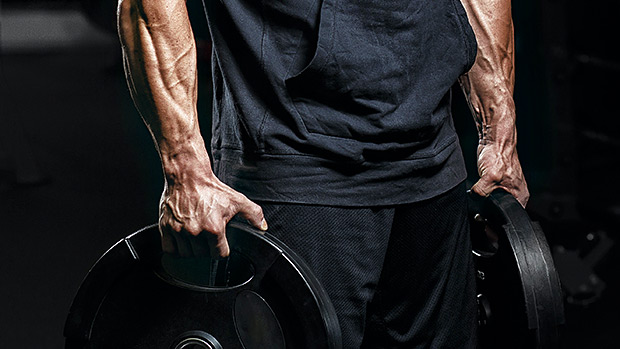 “Hey Ryan Seacrest, listen up. First of all, the notion that I spend my entire day in the gym, eschewing all worldly pursuits like friends, hobbies, a job, assorted passions, business dealings, intellectual pursuits, and things that are soft and warm with voices like nightingales is ludicrous.

“The truth is I only spend maybe five or six hours a week in the gym. I can do that because I know what I’m doing. And even if you did spend ‘all day in the gym,’ you still couldn’t look like me.

“Sure, maybe you do have some concept of what exercise is. Maybe you’re in some leotard wearing, mat-sniffing yoga class, one where you get off on sneaking glances at women contorting their bodies into fleshy pretzels and pointing certain herbal-tea infused body parts at the celestial heavens.

“Maybe it’s your ‘Tap Kwan Do’ class where, instead of learning how to physically defend yourself, you learn how to emotionally disarm assailants through the enchanting beauty of tap dancing.

“Maybe it’s the 10 half-assed naked push-ups you do every morning – the ones where your manhood barely grazes the faded shag carpet – that makes you believe you know something about exercise, but none of that’s really a workout, is it?

“To know what I know, to do what I do, you’d have to actually read, study, think, and practice. I’m as in tune with my body and the precise motor-movements it takes to do even the simplest biceps curl as Rory Mcllroy when he nails a chip shot out of the rough or when Stephen Curry drains a 3-point shot from 25-feet.

“If you were to try doing a proper squat or deadlift or curl, you might as well be trying to perform a handstand on a balance beam.

“Oh, you may be able to approximate the motion, but your muscles are retarded by inactivity, a sluggish nervous system, and tiny little vestigial testicles that fossilized a long time ago, whereas people like me are as in tune with their muscle fibers as one of those strange Tibetan monks who can slow their heartbeat to a standstill.

“We can get more out of one set of barbell triceps extensions than you can from an hour of Nautilus pushdowns or NordicTrack Wang Master or whatever ridiculous machines you have in your Planet Fitness center.

“You have virtually no knowledge of your body, either conscious or subconscious, actual or intuitive. You’re like a drunken chimp that was given a car and somehow learned to crash it forward into the outhouse by pushing on the gas pedal with a long banana. It may not look pretty, but yeah, you’re driving… sort of.

“So don’t tell me you could look like me if you spent all day in the gym.

“People like us have a dynamism you can’t comprehend. Go ahead, call us elitists; we relish the term. With apologies to the Constitution, we were not all created equal. Okay, maybe we’re not really better than anyone, but what business does anyone have in doing anything if they don’t go into it thinking they’re the best, or at least have the capability of being the best?

“Like a crazy gonzo journalist once said, ‘Anything worth doing is worth doing right.’ That’s the mindset it takes to do what we do, Princess, so the next time you feel like telling one of us you could look like us if you wanted to – if you spent all day in the gym – shut your pie hole or prove it.

“Have a nice goddam day.”

But maybe the next time someone gives me the “I could look like you” line, I’ll just print this rant out and staple-gun it to the offender’s forehead. You know, just to save time so as not to detract from all those long hours I need to spend at the gym.