It’s easy to tell visually if someone is low on testosterone. He or she might lack muscle tone. They might carry a little extra body fat, and their eyes might not sparkle quite as much as they used to. They may walk differently, taking short unsteady steps instead of long, confident strides. There’s often an overall lack of energy and, well, a lack of presence.

However, people who are low on testosterone can sound different, especially if they’re older. Their voice is definitely weaker and maybe even a little harsh or discordant. When they speak, it sounds almost like the hinges on a creaky coffin in one of those old vampire movies. It’s just the classic old person voice.

This change in pitch and vocal quality is called presbyphonia and a lot of it has to do with declining levels of testosterone.

When a young man hits puberty, his body is exposed to a flood of testosterone. In addition to making him more muscular, it also affects his voice. The vocal cords start to grow in length and thicken. Where the cords were once thin and higher pitched like the strings of a violin, testosterone turns them into a deeper, resonant cello.

Testosterone also increases the size of laryngeal cartilages, muscles, and ligaments and the overall effect is a drop in vocal pitch of about an octave. The vocal cords of females, too, are affected by the hormonal surges of puberty, but their voices only drop by about a third of an octave.

Male and female voices remain largely unchanged throughout the rest of their youth and middle age, provided their vocal cords aren’t affected by systemic disease or excessive pollution, smoking, injury, or shouting. 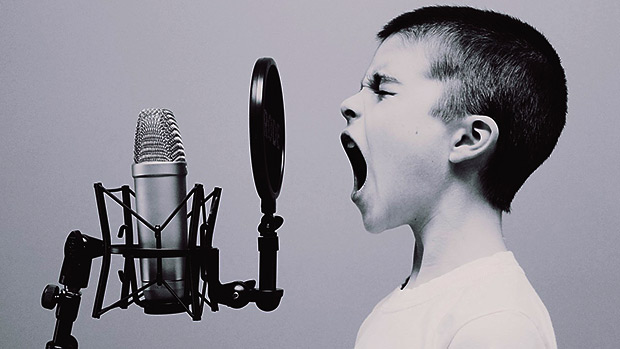 However, once testosterone levels start to decline appreciably, the voice changes, sometimes dramatically. Laryngeal muscles start to decrease in size and collagenous fibers decrease in quantity, leading to an overall stiffening of the vocal apparatus.

Whereas this stiffening usually causes older women’s voices to get deeper, men’s voices often get higher because of a change in pitch, which is determined by how fast the vocal folds vibrate.

This vibration is largely controlled by the length and thickness of the vocal cords and how well the muscles that surround them can tighten and relax. Testosterone, of course, plays a big part in the strength and size of muscles – even laryngeal muscles – so it’s only logical that declining levels of the hormone cause the voice to weaken, too.

The net effect is that the old male voice is less powerful, higher pitched, and characterized by tonal abnormalities, while the old female voice, while also weak, is gruffer and suffers from the same tonal abnormalities. Think Homer Simpson’s dad and Marge’s mom.

The effect is so pronounced that virtually any one with normal hearing can pretty much tell whether or not there’s an “old” person on the other end of the phone.

No Need to Quit the Barbershop Quartet

It’s highly likely that men and women who maintain normal testosterone levels through middle age – either by good genetics, righteous living, or by beginning testosterone replacement therapy in middle age – don’t experience this decline in vocal strength or quality. They continue to sound like young people, regardless of their chronological age.

Likewise, older people with already weak voices can regain some of their vocal pitch, timbre, and steadiness by starting testosterone replacement therapy. It’s never too late, it seems.

Of course, sounding young may not be that important to these older people, unless they’re involved in sales, public relations, or any job or position where they have to use their voices to convince people of some fact or position. Even so, a young voice is just characteristic of the vitality and health that can often be maintained by keeping testosterone levels in a healthy range.