Big O's in the Gym

Back in 2007, a woman asked a simple question on the T Nation discussion forum: "Ever had a coregasm?"

Men replied, "What the heck is that?" But many women replied, "Um, yes. I thought I was the only one!"

A coregasm is an orgasm experienced during exercise by many women. Interestingly, this unexpected toe-curler happens even though nothing "down there" is being directly stimulated. In fact, the women report that they weren't even having sexual thoughts beforehand.

Most women find this pleasurable, but others do not. "The truth is, it's not as sexy as men would like to think," one woman said. "It's just useless stimulation at the wrong time. It's a nuisance more than anything else, and it can derail an ab workout. Since your mindset isn't in that place, it doesn't do anything for you."

Back in the day, many men – and even women who'd never experienced one – said the coregasm was an urban legend. But in recent years science has cleared things up.

Researchers confirmed that exercise – absent of any sexual thoughts – can indeed lead to female orgasm. Hundreds of women participated in an online survey and the results were interesting:

In the past, many women have been baffled about this phenomenon. About 20 percent said they couldn't control their experiences and were reluctant to train in a public gym. Many felt guilty or thought something was wrong with them. This study shows that it's very common, and except for being, well, weird, it's not a sign that anything is wrong.

There's no exact answer from science yet, but it may have something to do with "pelvic floor recoil" or contractions of those sexy Kegel muscles. It's more likely to happen after the body is warmed-up since blood vessels have been pre-dilated by exercise. So if a female wants to experience a coregasm, get a sweat going then hit some leg raises. If not, maybe stick to upper-ab exercises.

Can Men Have One? 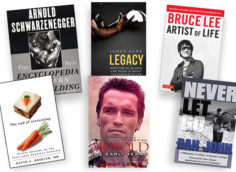 Lifting. Diet. Sports. Philosophy. Here are some of our favorite books on these subjects and where to buy to them right now.
Books
T Nation August 7
This is part one of an article about Chris Shugart and Cy Willson's trip into Mexico to check out the steroid scene and bordertown culture.
Living Better, Pharma, TRT
Chris Shugart July 27
The Positive Effects of Testosterone on the Heart
Living Better, Pharma, TRT
Douglas Kalman March 16

Why are bodybuilding fans and gym rats often the most homophobic people around? Time to call them out.
Blogs, Opinion, Strong Words
Chris Shugart July 2