My wife was in the locker room at the gym when she overheard the following conversation between a mother and her teenage daughter who were both trying on some leggings from the gym's pro shop:

Obvious to anyone over the age of 20, perhaps, is that the daughter's desire to have a big butt represents a head-snappingly fast cultural change. Prior to a few years ago, the last thing a woman wanted was to have a big butt.

But what my wife overhead was just another case of what I call aspirational Kardashianism, which is the bizarre, rapid-onset modern practice of trying to cultivate a large butt through surgical intervention, fat injection, marathon workout sessions geared solely towards butt development, or just plain eating.

It's a condition where "quality," symmetry, and aesthetics of the butt take a crowded backseat to size. It's just another case of cultural emulation, but instead of a generation of boys growing up to "be like Mike," this generation of women is aspiring to "be like Kim," but substitute being adept at fade-away jumpers with the proclivity to take countless bend-over-and-smile selfies.

In a surprising twist, though, there's some research out there that suggests women with bigger butts are actually healthier and may live longer; that the extra gluteal fat they sport protects them against cardiovascular and even metabolic disease.

What Determines the Size of the Butt?

Generally speaking, the size of the butt is determined by four factors:

Clearly, big butts are for the most part born, not made. All of the preceding factors are genetic. The first two are almost certainly controlled by multiple genes, but scientists reporting in the journal Genome have reported that, in sheep at least, that a single mutated gene (named "callipyge," from the Greek word meaning beautiful buttocks) causes some animals to have an unusually large, muscular bottom.

Whether this same gene exists in humans is unknown, as is whether it explains the proclivities of certain lonely sheepherders, but one thing is clear: a bigger butt seems to come with certain health benefits.

Oxford researcher Dr. Konstantin Manolopoulos looked at a sampling of 16,000 women and found that thigh fat and a larger hip circumference, unlike tummy fat, promotes health and is in fact "protective by itself."

Apparently, abdominal fat is much more active in storing and releasing fat after heavy exercise or periods of starvation. Thigh and butt fat, however, is used for much longer-term storage.

The fat stored near the stomach dispenses free fatty acids that float around the body and are deposited in organs like the liver, and this is associated with things like diabetes, insulin resistance, or heart disease. This type of fat is also known to release inflammatory cytokines, which further promote disease.

The thighs and butt, however, trap fat, in addition to secreting beneficial fat-burning hormones like leptin and adipokinectin.

A woman can make the butt the focus of resistance training and can make long and wide strides in making it bigger, but most really big butts, like Kardashian's, were likely a questionable gift from the rump god. (She had a genetically big butt even before the "fat transfer" injections.)

You can perhaps identify women with the true Kardashian butt – the ones who purportedly have health advantages – by their often mind-boggling hip-to-waist ratios.

These bigger-butted women seem to be able to regulate their weight throughout the year with much more ease than most other women, presumably because of their higher levels of the leptin and adipokinectin, which probably explain their relative leanness elsewhere in the body, particularly in the waist.

Women who don't have the genes for bigger butts, who nonetheless possess big butts because of overeating, sloth, or sheer caloric will, are likely to be pudgy all over and lack the positive health attributes of women who were born that way. 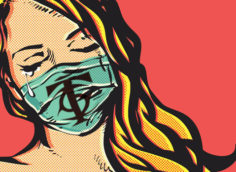 A Brazilian journal suggests that training with that thing on your face might actually have some long-term benefits.
Health & Longevity, Living Better
TC Luoma September 20

Why do some people get awesome results in the gym while others don't? It could be a number of things, but here's the most overlooked, and most important, factor.
Blogs, Opinion, Strong Words
Christian Thibaudeau August 19