Is That Thing Real?

Buttocks augmentation: It started in Latin America, crept into Hollywood, invaded social media, and now you even see it at the gym. We're talking about fake butts here: implants, fat injections, and other things that'll downright horrify you.

Some of the women sporting these big booties eventually admit it, but most of them lie and say it's all hard work and squats. Their leg-to-butt ratio tells a different story. Sure, training can build a larger behind, but only in proportion to the musculature of the legs. Even a woman with the best genetic potential for big glutes will still have powerful looking legs as a result of her training... not two sacks of potatoes sitting on top of toothpicks.

When it comes to the backside, there's a whole other population of women outside of our little fitness microcosm getting augmentation done. In some cultures, it's just as acceptable as breast implants.

Butts are not like breasts. No woman can build her breasts with a barbell or machine. She can build a butt, however, because it's muscle. It's built in a squat rack, not on the operating table. But nowadays, particularly in Latin America, that's not totally true.

If you're a serious lifter, you probably don't get it. If you're like me, you've never seen a fake butt that looks as good as a real butt. That's not to say that some can't be well done. Your wife's favorite Instagram fitness guru may be sporting an augmented booty. But even when done right, you're never going to get a fake butt to act, feel, and look like the real thing.

But it's somewhat understandable. If you're a muscular chick with a nice set of wheels and want to add a little Latinesque curvature to your rear, and the thing just won't grow the way you want (because what you want is unrealistic), you can opt for a little work to be done on it. Depending on the girl, a little bum plumping can be a game changer. It just depends on what you want: a butt or a booty.

It's like having to decide between "tits" or "breasts" when you're getting implants. You can't have it both ways. Wholesome or trashy, there's little gray area.

According to the American Society of Plastic Surgery, almost 5,000 buttock augmentation procedures were performed in 2015. This number is currently lower than total facelifts and breast implants, but butt augmentation is the fastest growing procedure. These surgeries increased 98%, from just 942 procedures in 2013 to 1,863 in 2014. Just a cursory glance into social media will tell you that the desire for a disproportionate butt is only expanding.

Kim Kardashian likely wouldn't have risen to fame were it not for her huge behind. When she first started towing a larger load behind her, she insisted it was all hard work in the gym. If you're a lifter, that claim is an insult to your intelligence. We know the shape of gluteal muscle. And it's not that dumpy.

In one of her mind-numbing TV show episodes, she tried to stop the accusations that something was going on with her ass, because the damn thing kept growing like a bunch of clowns getting out of a Mini Cooper and no one online could stop talking about it.

So they stuffed her into an MRI machine and – spoiler alert – announced that the MRI showed there were no implants in there. Imagine that! Her enormous ass was all because of her trainer. Oh thank goodness reality shows inform us about reality! Glad we got it straight otherwise we would've gone on thinking she hadn't trained hard for that ever-growing monument.

But based on the significant increase in ass mass and the lack of "tone" or musculature elsewhere, anyone with a brain could assume something was going in there. If not implants, then what?

Muscle doesn't just grow there like that, and natural body fat distribution doesn't work like that either. Though the MRI ruled out implants, it didn't exonerate her of the accusation that SOMETHING was in there that nature didn't intend. This brings us to the non-implant enhancement – the fat transfer.

Kardashian passed her MRI test not because she studied for it, but because, instead of implants, her own body fat was harvested from the ample reserves on her stomach and low back and injected into her ass. That's my professional opinion at least.

Transferred fat looks no different on MRI than stationary fat. Actually, harvesting the fat from the low back and stomach helps the doctor sculpt the end result. As the term implies, you're transferring fat from one place and using it to "sculpt" and "lift" another area.

The fat is liposuctioned out and ground up into something that looks like a fatty milkshake. The liquefied fat is then put into cartridges that look like tubes of caulking with a giant needle sticking out of the point.

The cartridges are loaded into a caulking gun-like thing, and the plastic surgeon goes to work injecting the fat into numerous locations within the glute muscle, plumping it up to the intended dimensions, the way Butterball does with your Thanksgiving turkey.

Plastic surgeons call all of this the "Brazilian Butt Lift" and it can be a combination of fat transfer, cosmetic filler, and/or implants. This procedure is one of the most costly, invasive, and complicated. First, if using fat, the body has to harvest enough of it to build that dream booty, and second, to maintain its size.

One of the potential downsides is that as the transferred fat either settles or is metabolized, the form can shift and accentuate the outline of the implant. So, more fat needs to be injected to "smooth" things out.

Because there's no implant needed for the fat transfer, it's the preferred means of ass augmentation, but because some of the transferred fat does settle and/or get metabolized by the body, it requires maintenance shots. If you do it, be prepared to eventually spend a solid $20,000 on such a procedure and its maintenance.

A more economical procedure involves injecting a "locatable oil" into the glute muscle. This is like when a bodybuilder injects Synthol into his biceps. The concept is the same as the fat transfer, only the doc – or technician or con artist – uses cosmetic filler or medical-grade (hopefully) silicone rather than the body's own fat. What they use is as important as how they use it, and the downside to having it done wrong can be disastrous.

Because this folly started in Latin America, the ladies in Mexico were among the first to find the tragedy in it. One of the most famous debacles talked about among the booteratti of Guadalajara revolves around a woman named Myriam Yukie Gaona Robles. She ran a beauty business that offered weight loss, wrinkle fading, and augmentation of breasts, behinds, thighs, or anywhere else you desired it. It was discount plumping!

Fifteen hundred women took advantage of the low prices and, assured by the diplomas framed on the walls (that could be purchased online for 50 bucks), they unwittingly subjected their bodies to injections of industrial-grade silicone and baby oil.

One of the hundreds of women subsequently seeking a plastic surgeon to repair the damage from infection, disfigurement, and mutilation, was the sister of a famous actress. The media was obsessed with the story and for weeks fed the gossip-hungry public headlines and gruesome pictures of deformities where there used to be breasts, butts, lips, etc., labeling Robles "La Matabellas" which means The Beauty Killer.

The public outcry and celebrity obsession spurred law enforcement to eventually arrest and prosecute La Matabellas, sending her to prison for 12 years. She became the first person in the world to be sent to prison for such a crime. Somehow, I don't think the women who lost entire body parts think that was enough.

Can't imagine something so crazy happening in the US? Here's a small rundown:

Pumping parties are what women often attend to get low-cost injections in their butts, lips, faces, etc. The injections sometimes consist of many sketchy things like non-medical grade silicone, also an ingredient in tire sealant.

These events can cause serious, life-threatening consequences, horrible infections, horrendous scarring, and deformity. Or they can go "successfully" and you'll end up with a partially cement ass that never looks right.

While infections can be treated, other results, such as hardening scar tissue and chronic pain, nerve damage, and necrosis (death of the body's actual tissue) can't be reversed. And, of course, there's always death, the ultimate thing you can't undo.

Nevertheless, the "shot girls" illegally administering these injections are raking it in big, but the very nature of what they do and how they do it dictates they will not have a very long career.

Of course, not every butt augmentation ends undesirably. Some women, and even some men, have mild butt-lifting surgeries, and no one is the wiser. There's still cause for worry, though. Dr. Tensor Mir, plastic and reconstructive surgeon at Lenox Hill Hospital in New York, says, "It's a ticking time bomb. All of them are going to have problems one day. Complications can pop up 20 years down the road."

In her book "Shot Girls", a stripper named Vanity Wonder chronicles her quest to double the size of her ass to a jaw dropping measurement of 34-23-45.

While her experience didn't necessarily turn out badly – I guess that would depend upon who you ask – her mission is to warn others about the inherent dangers and downfalls of extreme butt enhancement.

There are those who are clearly cosmetically enhanced and have no problem talking about it, like the Bruna twins. Originally from Argentina, these girls are no strangers to a gym. But they're also no strangers to plastic surgeons' offices from Beverly Hills to Colombia.

In case you're wondering, ladies, glute muscle alone won't look like that no matter what you do in the gym or whose training program you've bought. And if that's the cartoonish shape you're going for, realize that your goal is the look of plastic surgery, not the look of pure hypertrophy earned by time under tension, high reps, heavy sets, and work under the barbell.

Sure, an experienced plastic surgeon can do a good job on a bum in a sterile operating room. Just like with many elective procedures, it can be a problem-free experience, and you can achieve the sex-toy look if that's what you're after. Just don't cut corners. Even so, most of us will still ask, why not just do squats and be happy with the realistic results? 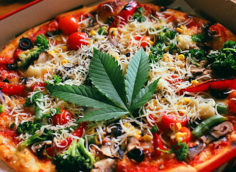 Many pro bodybuilders look pregnant. It's like they've got a six pack stretched over a keg. How does this happen? That question, answered.
Bodybuilding, Living Better, Opinion, Pharma, TRT
John Romano August 25