You've seen the commercial. Man or woman, you probably couldn't take your eyes off the TV. The heat. The flames. The sweat.

And that model! Lean. Hard. Sexy. The epitome of a fit female. Her name is Jelena Abbou, but you may know her as The Fahrenheit Girl.

For years, we've been trying to convince females that weight training will enhance femininity, not detract from it. We did everything we could to spread the word about the positive relationship between women and weights. Turns out all we needed was Jelena. A picture may be worth a thousand words, but a 30 second commercial is worth a few billion.

At 5'6" and 118 pounds, 28 year-old Jelena is redefining feminine muscle. It's about time. While the bodybuilding community was being soiled by steroid abusing she-males, the modeling world was equally damaged by anorexic waifs. Jelena is coming along at just the right time to set both communities straight.

Still, we're curious as to how the world will receive the first truly "buff" woman to appear in a Nationally televised commercial. It's definitely a roll of the dice, but we like the risk; we like the action.

Anyhow, we desperately wanted a reason to run more of her smokin' photos, so we called her up for an interview. 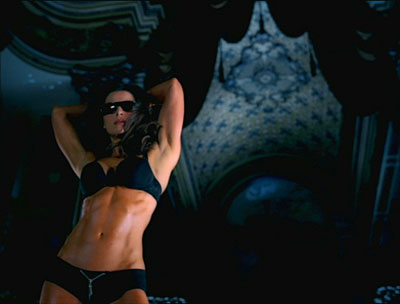 T-Nation: Where did you grow up, Jelena?

Jelena: I was born in Serbia where I lived in a small town outside of Belgrade. I went to high school in Serbia and when I was 20 I came to America to try and fulfill my dreams.

T-Nation: How did you first get into exercise and fitness?

Jelena: I was always very skinny as a young girl. At age 16 I became interested in having a more muscular physique. I was one of the first girls that started working out in my town, which had only one gym at the time. But I didn't really take training and dieting seriously until about five years ago when I decided to start competing in figure competitions. 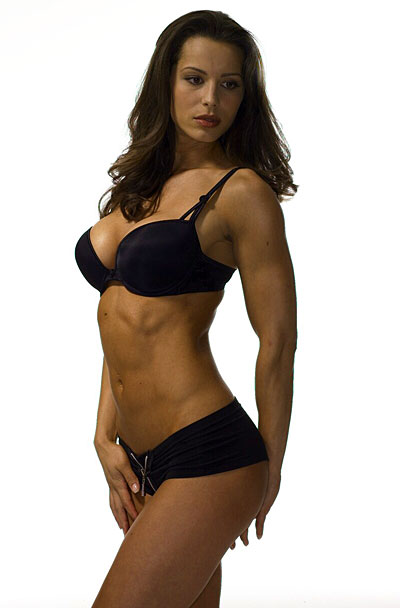 T-Nation: You've made remarkable progress in only five years of serious training! Give us an overview of your weight training program.

Jelena: I change my training often, so my training split isn't always the same. Sometimes it even changes from week to week. But generally I lift heavy, 6-8 reps per set for upper body work and 8-10 reps for legs. I usually train four or five times per week, one to two body parts per day.

T-Nation: How about cardio?

Jelena:In the off-season I try to keep cardio to a minimum. I only do it once or twice a week. During the season I start with two sessions a week and go from there, depending on how I look and how far from a contest I am.

I don't like cardio, and I'm not like some other competitors who do endless hours of it. I prefer to stay in good shape in the off-season rather than go crazy on cardio before competition.

T-Nation: Let's jump to diet and nutrition. What does your diet look like?

Jelena: My typical diet is high in protein: egg whites, chicken, fish, 99% lean turkey, lean beef once in a while, and protein shakes. I consume moderate carbs like oats and sweet potatoes, and moderate fats from fish oil, peanut and almond butter. I do add high carb days a couple of times a week though.

T-Nation: Those carb rotation diets seem to be really catching on. What types of supplements do you use?

Jelena: I use multivitamins, fish oil, amino acids, glutamine and creatine. While getting ready for contests I used to take HOT-ROX, but now I use Fahrenheit since it's formulated especially for women. 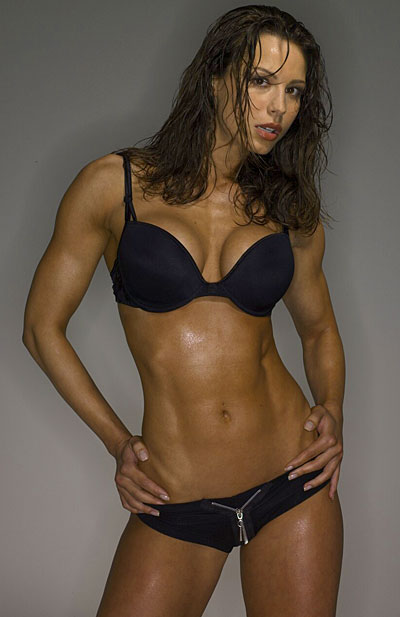 T-Nation: You're also a personal trainer, correct? What has this taught you?

Jelena: Yes, I'm a trainer. One of the most important things this has taught me is not to overtrain and to maintain proper lifting technique for all exercises.

Jelena: I don't find any challenge in dieting and training for competition, because I don't make extreme changes with my usual routines. I just have to be in peak shape the day of the competition and hope for the best. The only real challenges involve all the traveling! Unlike the men, we have to worry about not only our physiques, but picking the right suits and getting our hair and make-up right!

T-Nation: Competing in high heals at single digit body fat can't be easy either! I know because I had too many Heinekens once and... nevermind. Now, many critics say that some fitness models are getting too big and even too shredded. Some look like female bodybuilders from the 1980's. What do you think?

Jelena: I'm not sure if I want to criticize how other women choose to look or speculate on what they're doing to look that way. I can only speak for myself, but I've always liked the more feminine approach to muscle building. All I do is make sure I like what I see in myself.

T-Nation: Fair enough. What does the future hold for you? What are your goals?

Jelena: As far as competing goes, I'd like to make it to IFBB Pro in the near future and then see how I measure up with the girls at the top. As far as modeling goes, I'm going to a lot of casting calls. I did a few jobs already and I'm hoping for the best.

T-Nation: Your Fahrenheit commercial is going to inspire a lot of females to get into the gym. It's also going to inspire those women already in the gym to step it up a notch. Any words of advice for them?

Jelena: My best advice is to be patient and consistent. No matter your goals, fat loss or muscle building, choose a good diet and some good supplements and stick with them. The results will follow! 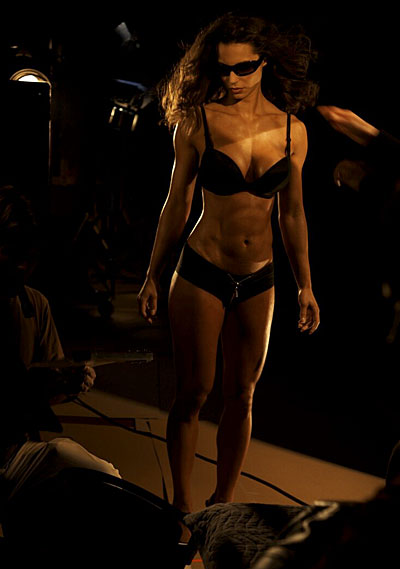 Figure and bikini competitors use them. Celebrities endorse them. But what's really happening to the body when squeems are used? Here's the nasty truth.
For Women, Health & Longevity, Living Better
John Romano April 28
The measurement of body composition is an inexact science, and outside the laboratory, it becomes an even more inexact science.
Health & Longevity, Living Better
Jason Norcross May 10