"Sorry, this has never happened to me before."

I couldn't believe those words were actually coming out of my
mouth. There I was, naked in bed with a beautiful, equally naked
redhead, and my normally reliable trouser soldier wouldn't come to
attention.

I'm only 31 years old, in excellent health (thanks to T-Nation),
and a month before I'd had sex seven times in two days. And now,
here I was, reciting a line from a situation comedy. And it wasn't
funny. Not one little bit. I'd become one of  them: a
guy who couldn't get it up.

Humiliated and confused, I booked an appointment at one of those
walk-in medical clinics the next day. I was determined to have some
pharmaceutical back-up in case (gulp) this ever happened again.

Going to a perfect stranger and telling him your penis doesn't
work didn't seem like an exciting way to spend a Monday morning.
Filling out forms and listing "ED" as the problem was another blow
to my manhood. But I swallowed what was left of my pride and did
it. I would  not  go through another night in bed
with a moist redhead and a limp noodle.

An hour later, my doctor walks inÉ a female doctor.
Wonderful. As a coping mechanism, I took on a clinical demeanor and
began speaking like a medical encyclopedia:

"Doctor, I'm perfectly healthy. But over the weekend I had
trouble achieving an erection for the first time in my life. I'd
had little sleep, was under a lot of stress at work, and was
nervous about sleeping with this woman for the first time. My
prostate and blood pressure are fine, and I'm not taking any
nitrates. I'd like to get a prescription for Cialis in case this
happens again...you know, as back-up. I've done the research and I
think this is a good choice for me."

I also told her that I'd been dissatisfied with the rigidity of
my normal erections. This was a lie, but I knew those code words
would help get me the drug I wanted. The doctor wanted me to get
some tests just in case and I said I'd come back for them. (I never
did.)

Instead I walked out an hour later with a prescription and a
slightly red face. To my surprise, insurance covered some of it and
I left the pharmacy 55 dollars lighter, but carrying a bottle of
five magic little tablets. (Without insurance it would've been
$63.)

I'd experimented with Viagra recreationally before. It worked,
but basically it made me feel hot and flushed, and I walked around
for an hour after sex with a semi. Cialis (tadalafil) works about
the same as Viagra, by increasing blood flow, but the effects last
for 36 hours in most men. You don't have to time sex as perfectly
as you do with Viagra. Pop one tablet on Friday at 6:00 PM and
you're good to go until Sunday morning or so.

In spite of this wide window, I missed my opportunity with the
first two tablets. Damn, twenty bucks down the drain! Since I was
just in a casual relationship, the sex wasn't guaranteed, and well,
it just didn't happen on two separate dates.

Finally, the previously mentioned redhead gave me another shot.
I was booty-called at 10PM, dropped a Cialis at 10:01 and was
knocking boots with fervor at 11. That session lasted a couple of
hours and we had another go-around the next morning and then again
that night. Cialis is said to work within 30 minutes and last for
about 36 hours. I can vouch for that.

Now, I don't really have ED, which is usually caused by other
medical conditions. I think my single "episode" was caused by
stress, lack of sleep, and nerves more than anything. In spite of
that, I could definitely feel the boost of Cialis. My erections
were rock hard. I thought my erections were always rock hard, but
with Cialis we're talking about one level beyond the usual
rigidity.

Cialis puts guys over 30 into super-stiffy mode, the kind of
stiffies that we may not have had since being 16 and waking up
after dreaming of Heather Thomas walking through our door in
that  Fall Guy  opening montage bikini.

Also, the Cialis material says, "Sexual stimulation is required
for Cialis to work. You will not get an erection just by taking
Cialis without sexual stimulation." This is true enough, but it
should be noted that "sexual stimulation" when on a 36-hour Cialis
bender can be:

• The friction of walking

• The touch of  any female, anywhere on your body,
at any time of day

No, there were no embarrassing 8th grade public erections —
where, like clockwork, the teacher would ask you to come to the
chalkboard and work a math problem for the class — but I could
literally feel the flood flowing to Mr. Happy and preparing him for
instant throbbing erection. I seemed to be in a constant state of
10% arousal.

There was also no loss of rigidity during marathon sex. Before,
I'd come close to climax, a sort of partial ejaculation, then have
a less stiff member afterward. With Cialis, this can happen a
couple of times and I'd still maintain super-hardness even two and
three hours into a "high-rep, horizontal hip/glute exercise."

Finally, being on Cialis, especially after having an ED
incident, is a real confidence booster. I'm not saying it's placebo
effect, but knowing you're on something that will help you sexually
certainly helps you relax and enjoy yourself.

I don't take Cialis all the time these days, but sometimes I pop
one before a weekend getaway with a woman or before having sex for
the first time with a new girlfriend. After all, having great sex
the first time usually helps guarantee second and third
nookie-sessions later on down the road.

In closing, remember that a doctor would tell you not to take
such drugs if you don't have real erectile dysfunction. Well, I'm
not a doctor, so I'm telling you that Cialis is a mighty fun
recreational drug as well as a nice back-up in case you, like me,
have a one-time failure to launch. Just do your research
(http://www.cialis.com) and encourage that fiery redhead to give
you another shot. 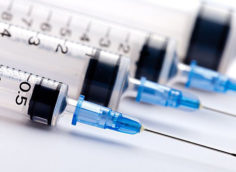 Is it worth injecting? Can you boost GH naturally? Do any supplements work? Answers here.
Living Better, TRT
Dr Jade Teta October 1

Find out if you have high or low T just by checking out this body part. And no, it's not the part you're thinking about.
Living Better, Testosterone Optimization, Tips, TRT
TC Luoma September 17