Advances in modern medicine and technology have brought to market an ever broadening array of cosmetic procedures designed to create the illusion of fitness, health, and beauty. The list grows as science gives us more options for self-modification.

Today, most body parts have a cosmetic alternative – including these muscles:

That’s right, the appearance you achieved with hours under the barbell can be replicated by a doctor. Or at least that’s the look doctors are aiming for.

The Evolution of Augmentation

These plastic surgery procedures were initially pioneered for people with severe muscle deformities due to illness or injury, like when some dude leaves half his biceps splattered on the road after a motorcycle crash. Implants could fill in the missing piece. Tear your pec off bench pressing? A small implant could make your chest look proportional again.

The success of these procedures were lauded in prestigious journals such as the American Journal of Cosmetic Surgery and the Cosmetic Surgery Times. Plastic surgeons have extensive experience in sculpting and placing solid silicone reconstructive implants.

But somehow this process got perverted. Eventually, a growing celebrity clientele helped promote the notion that implants can “enhance one’s body definition, enhance natural body curvatures, and help one achieve the ‘perfect’ body.”

Back in the day, the fact that bodybuilders were using “a little something extra” to help them build muscle was largely a secret. The muscle magazines certainly didn’t mention steroids and other drugs.

Bodybuilding had a lot in common with pro wrestling: many wrestling fans believed it was real and would actually argue with you about it. Same with steroids and bodybuilding. But today even sixth graders know that bodybuilders are using drugs.

It’s also no secret that bodybuilders have been enhancing their muscles by plumping them up with site enhancement oils. The problem with oiling your muscles is that it presents such a broad array of effects.

Flex Wheeler is known for having perhaps bodybuilding’s most perfect physique. He admitted to using Synthol in a few select body parts during his Olympia bids. So did Valdir Segato. Even if you’re unfamiliar with the two, you can guess which one is which. 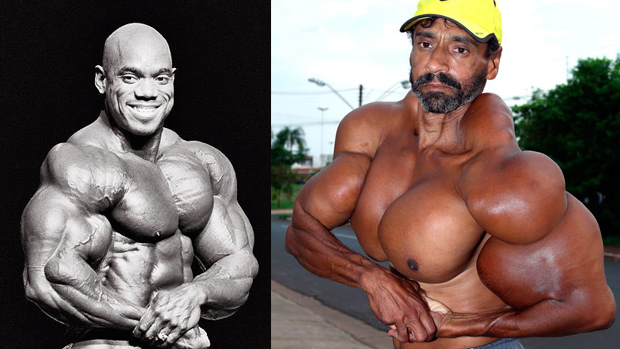 Flex Wheeler’s body composition was mostly muscle and very little oil. Valdir’s was on the other end of the spectrum. He appeared to have more oil than muscle.

Injecting oil into muscle to make it bigger is not only inconsistent and dangerous, it’s also highly suspect. If you’re not already a bodybuilding masterpiece, your enhancement can be spotted a mile away. And if you haven’t earned the muscle, all you’re doing is making a mockery of bodybuilding.

And that’s likely how the installation of prosthetic muscles got their start. People who were too lazy to lift, yet too vain to get oil injections, just resorted to muscle implants.

You can find an implant for any body part you want and choose from a vast selection of shapes, sizes, firmness and level of projection, all with the goal of appearing more muscular… without exercise. In fact, exercise is discouraged, at least right after surgery. 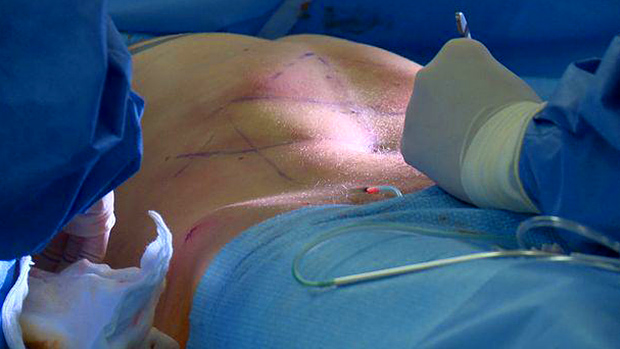 Years ago when ab etching became popular, it was something I could understand. It was done on already lean and built patients who just needed a little finishing touch on their abs. A skilled plastic surgeon would use a special cannula to liposuction fat from on top of the tendineous intersections on the abdominal wall that delineate the “six-pack.” Of course, you actually had to have the six pack under the fat to carve out.

But today it’s gone one step further. For those who don’t develop the requisite underlying musculature, the next step in surgical physique enhancement is ab implants. 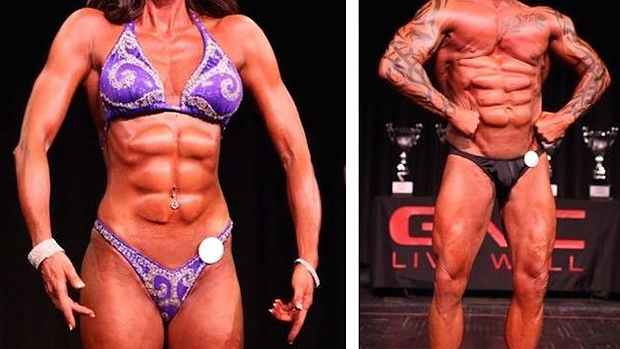 Just like breast implants, ab implants are small silicone devices implanted in a pocket cut into the muscle in between the tendineous intersections or under the facia (rectus sheath) of the abdominal wall. Six to eight can be implanted. The only problem is that if you really diet down to contest shape they look obviously fake, like you swallowed a pack of bratwurst.

So, how far will it go? Is imitation muscle the wave of the future? Will cosmetic medical technology ever take the place of the gym? And what kind of beast could you build with the unbridled use of the latest medical technology? 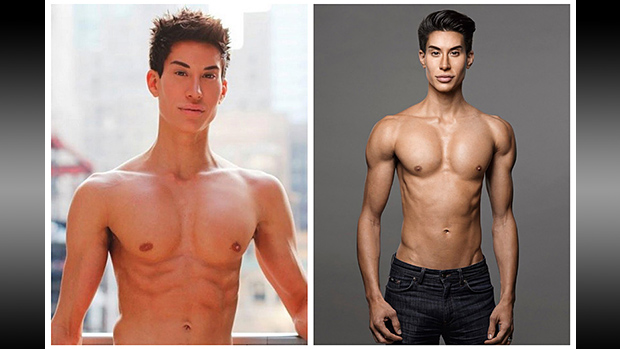 Meet Justin Jedlica, one of several men who’ve been given the name “Human Ken Doll” because he appears to be more plastic than flesh.

Now, even Justin will admit that he never set out to emulate Ken, but after 490 cosmetic procedures, his face looks more like a doll than a man. The body isn’t naturally his either. His biceps, triceps, delts, pecs, abs, butt, and even lats are fake. You have to hand it to him though – no Synthol. Justin had real, custom made silicon implants installed, many of which were designed by him. 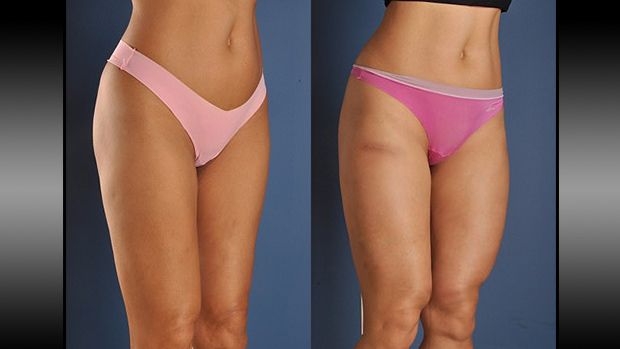 Did you catch that, ladies? Stop trying to deemphasize your leg development. People will pay thousands for that look!

It’s instant gratification without the weight training, the supplements, personal trainer, diet coach, steroids, or sweat – all of which Justin, a self proclaimed body modification professional, finds “so not exciting – not glamorous.”

Which means there’s no chance in hell he’s ever going to the gym, just the plastic surgeon’s office. Bucking the norm is so much more fun. Did anyone really think this day wouldn’t come?

The problem with prosthetic muscles is that the implant only bends; it doesn’t contract. So, in the case of a fake biceps, the doctor installs something that looks like a fat banana into the muscle belly. If you flex the bicep, the implant bends to follow the muscle, but it doesn’t contract and add to the aesthetics of the muscle. There’s no active tonus which would indicate that a body part can produce power. 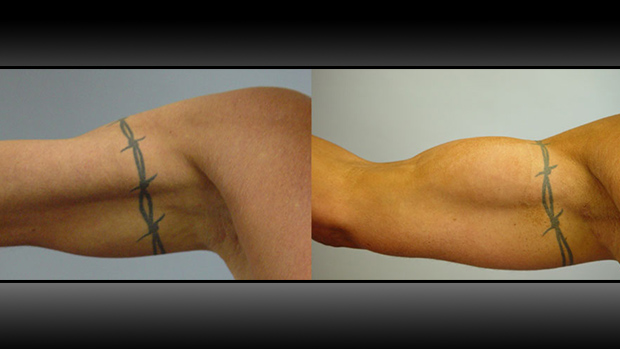 Justin actually took this a step further and designed his own bicep implants with a relief cut into the sides so that the implant would fold in on itself when it was bent instead of sticking out at the fulcrum like a point.

Remember when you were a kid and you’d flex your bicep and used your other hand to push it up to make it look bigger? That’s what the implant does, but from the inside. This way you can flex both arms at once. However, the less muscle present, the less the muscle is going to be able to be pushed up when it contracts.

To me, this is an affront to everything we hold dear. I can’t say though that he has body dysmorphic disorder. He seems like a perfectly functional human being… though his function is wearing fake muscles. And it’s a booming trend. Maybe we’re the weird ones who actually like to lift weights. Most people don’t.

Who’s Crazy? The Patients or the Surgeons?

You have to wonder what’s wrong with the doctors performing such an alarming number of procedures on the same person? Where is the sense of aesthetics?

Seriously, Ken’s arms look ridiculous, his delts don’t make sense, and his face looks like he belongs on the cast of Star Trek: The Next Generation. What part of the Hippocratic Oath can be interpreted to allow such folly disguised as medicine? When did it become apropos for doctors to feed an obsession rather than quell it?

I love America and the freedom we have to do to ourselves whatever we want. But Justin is a living (for now) testament to the fact that, just because we can, doesn’t mean we should. Most surgeons are so money hungry that they’ll just keep taking it regardless of the monsters they’re creating.

If you want horns installed on your forehead, there’s a doctor who’ll take your money for that. But, short of a tattoo artist or a metal band’s roady, there’s not a lot of opportunity in the workforce for a guy with horns. It seems the same for those whose faces and bodies have become more fake than real. That being the case, and since Synthol has already paved the way for fake-looking muscles, the stage has been set.

As insane as Justin’s lifestyle is, he’s somewhat of a pioneer – my critique of his body is not ad hominem; I actually think Justin is a likable guy. But it’s only a matter of time before people in our camp take it a few steps further.

The Future of Bodybuilding? 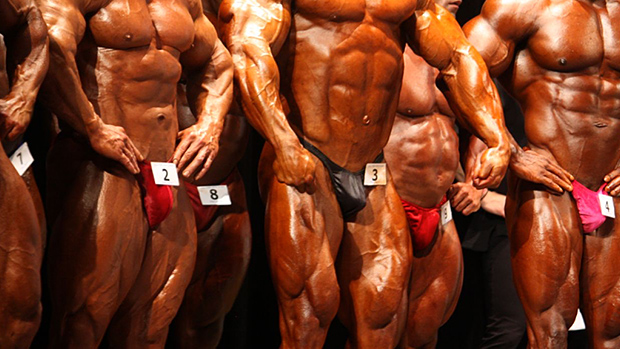 What happens when the already-built dudes – like those who could place in the top 10 of any pro show – start augmenting their already jacked body parts? They may be the new wave of winners.

See, unlike oil, an amorphous blob floating around inside the muscle on its way to creating lumpy scar tissue, a person’s surgeon can sculpt a prostheses like clay and force almost any dimension, within reason. And the stability of the device makes it safer and less infection-prone, unlike the oil that nearly caused Valdir to have his arm amputated.

If Justin can pay a plastic surgeon to make him look like a scarecrow on steroids, you can imagine a fairly precise looking 30-inch bicep peak. Or, more realistically, how about just a two-inch advantage on the enormous biceps a lifter already has?

We’ve already seen calf implants on the pro stage, or at least there have been rumors. Steroids are a prerequisite. A little oil injected here and there is somewhat accepted. Lipo and ab etching are common. Are plastic pecs and artificial lats next? And what will that do to bodybuilding as a sport? Fans have accepted drug use, but this?

And I still wonder who the real freak is: the guy wanting to take this course of action, or the doctor willing to do it? Remember that Frankenstein was the name of the doctor, not the monster he created.