1 – Get Ripped At Least Once

I’ve been bulky and I’ve been kind of ripped. Ripped is better. Big and bulky is a suit of blubbery, psychological armor. It’s a fat facade. You feel big outside so you don’t feel so small inside. But ripped is quick-footed, alert, and electric. And perhaps paradoxically, ripped makes you look bigger.

Big but undefined muscle is a pork roast; just a big hunk of random flesh, notable only for its sheer size and unsightly moles. Ripped is visually exciting, an idea or thought made real by hard work and dietary restraint. Ripped is harder to achieve, which is why it’s so rare and often so fleeting. Beware, though, once you get ripped, you’ll do everything you can to stay in that club, but the membership price is steep. 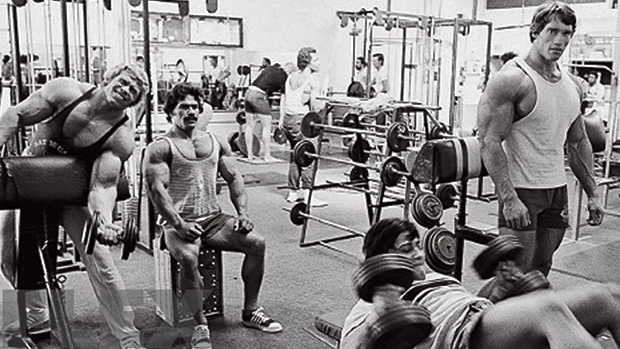 A devout baseball fan longs to see Wrigley Field or Fenway at least once, while the life of a racecar enthusiast won’t be complete until he sees the Indy 500 in person, but bodybuilders and generic weightlifters have their own Mecca and that’s still Gold’s Gym in Venice Beach, California.

It’s ugly, often dirty and smelly, the equipment sometimes sits unfixed for weeks, and holy crap they even offer yoga and Zumba now, but for a bodybuilder or weightlifter, it’s still glorious.

This is the place where it all started, where Arnold trained, that served as the backdrop in a lot of scenes in Pumping Iron, that became famous and drew thousands of lifters from all over the world because they knew the place was something special, a place with a palpable electricity in the air.

Granted, it’s not even in the original location anymore, but it still retains the aura of history and given that it’s still in Venice Beach, it’s close to the famed boardwalk and the same Rose Café where Arnold allegedly still grabs the occasional breakfast. It’s also still a stage to the world’s greatest collection of freaks.

After you’re done working out, walk the half-mile or so down the Venice Boardwalk (also home to 98% of the world’s freak population) to the famed Muscle Beach Venice. It’s also steeped in bodybuilding history.

Yeah, yeah, the weightlifting purists out there will no doubt aspirate their Wheat Chex and then spew a milky froth over their screens as they read this, but a short, modest, well-planned cycle isn’t likely to hurt anyone and may even improve your health.

Moreover, you’ll finally get to know how the assorted high-level bodybuilders, preternaturally gifted athletes, and action movie stars (who manage to transform their formerly non-descript physiques into something truly remarkable in just a few short months) are able to look or perform so phenomenally well. You’ll marvel at just how fast the muscle piles up and the fat melts off, pretty much regardless of how sophisticated your training program is or how good (or bad) your diet is.

It’s really remarkable. You’ll likely retain some of the gained muscle, half if you’re lucky, but more importantly, you’ll gain some understanding and peace of mind. No longer will you feel inadequate or think that you’re doing something wrong if you don’t bulk up in a short amount of time, your body fat doesn’t easily shrink to low single-digits, or if you fail to hit your bench press goals in three weeks, because you’ll know where that kind of progress usually comes from.

I’m aware that it’s illegal in the United States and that doing a cycle could get you in big trouble if you’re caught. For that reason, only do a cycle if you live in, or are visiting, a country where such things are legal. (There, I’ve presumably absolved myself of any legal liability.) 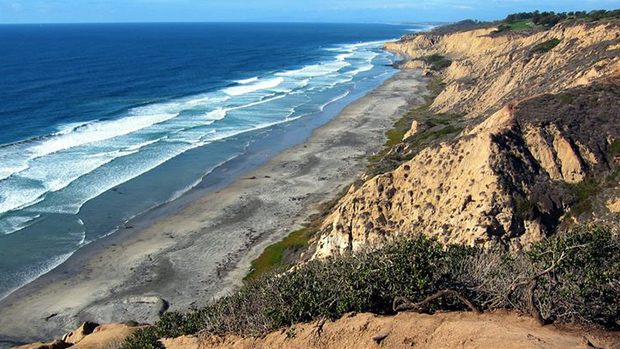 You’ve spent years building and sculpting your body until it’s pretty close to living, breathing sculpture, but only a select few get to see all of it. That’s especially true if you live in some place where global warming has yet to make its sweaty presence known. As such, you owe it to yourself to head to Black’s Beach in La Jolla, California at least once and strut your naked stuff under the brilliant sun.

I’ve only been to Black’s a couple of times and I’ll admit that I’ve seen wonderful things there and I’ve witnessed horrible things there. I’ve seen beautiful naked coeds from nearby UCSD walking around in naked girl squads combing the beach for shells, but I’ve also had to suffer the sight of a family reunion volleyball game, complete with a naked, gray, and horrifyingly droopy grandpa gingerly leaping up in an attempt to spike the ball.

Going to a nude beach is always a risky venture as far as your eyeballs are concerned, but regardless, you should go there at least once before Puritanism shuts it down. Help fill your naked bucket list by being a disrobed deity, a naked Neptune, an overlord of the ocean. Feel your nutsack or lady parts being buffeted by gentle sea breezes like the sails on a Viking ship hell-bent on plunder. No Instagram selfies if you’re a dude, please.

5 – Put Those Muscles and That Strength To Use

The majority of lifters remind me of a Bible passage:

“Consider how the wild flowers grow. They do not labor or spin. Yet I tell you, not even Solomon in all his splendor was dressed like one of these.”

And I say unto YOU that bodybuilders and CrossFitters look stronger than anybody and probably are stronger than everybody, but their strength is often worthless. They don’t toil and they don’t spin, at least not anywhere outside the gym. They’re beautifully muscled show-horses that have never drawn a plow. Instead, they merely pose and revel in their reflections in the eyes of observers.

Are your muscles worth anything? Can they actually lift anything that isn’t perfectly balanced or affixed to a perfectly knurled cadmium steel bar? Can they do functional work, or are they just for show?

Do yourself a favor and test them in a real-life, real functional way. Dig out a tree you’d normally hire a contractor to do. Dig a fence post. Mix some cement with a hose and a shovel. Kill the Nemean lion or clean up the Augean stables.

Use your imagination. There’s undoubtedly some physical work to be done nearly everywhere you look. You can unload dog food for an animal shelter, build some habitats for humanity, or find some Amish people and help them erect a barn. You can even build your own version of the Wheel of Pain from the first Conan movie and grind up some grain. I guarantee it’ll be at least as satisfying as any workout you’ve ever done and it’ll show you if those muscles are worth spit. 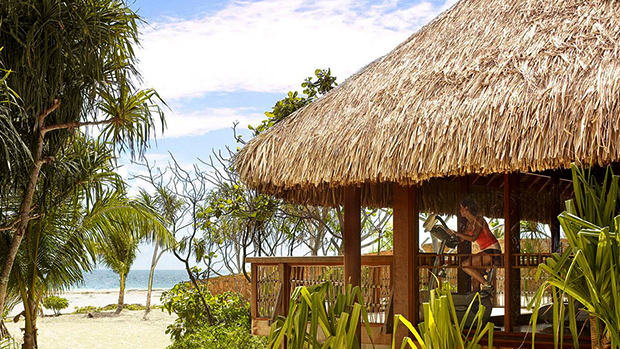 6 – Train in Beauty in Bora Bora

Sure, aspiring to train at Westside Barbell or Big Lou’s Mesomorph Gym where they not only regularly release the Kraken, but he and his buds train there, is a fine thing. Working out alongside some of the strongest mofos on the planet provides a rush and a whole lot of inspiration, but that type of inspiration is fleeting and maybe ultimately a bit deflating because it might make you realize how far off the strength curve you really are.

Training in natural beauty, though, provides a different type of inspiration. It’s restorative and it feeds the soul big bowls of goose-pimply feelings. And you can relive that glorious feeling any time by just closing your eyes and pulling up that memory file. Unfortunately, most gyms are located in warehouse districts or busy city streets and the only beauty to be found is in the brilliantly sequined pumps of the hookers hanging around outside.

That’s why you should put training at the fitness center in the Four Seasons resort in Bora Bora, French Polynesia, on your bucket list. The resort and the gym are located on a coral atoll that surrounds the island of Bora Bora. Do incline dumbbell bench presses while watching the pounding surf just a few feet away. Use the treadmill or stationary bike as you gaze across thousands of miles of ocean. Catch the scent of Hibiscus carried along by ocean breezes.

Granted, there’s not enough equipment or weight for you to set any new PR’s, but a smart, creative lifter will easily be able to make do. Afterwards, cool down by walking along the usually uninhabited beach and feel your concerns about anything and everything dissipate.

It can be pricey, depending on the time of year, but there are often reduced rates available during the off-season (November through April). Just catch the midnight flight out of LA and you can be in Tahiti a mere nine hours later. From there, take the hour-long prop plane ride to Bora Bora. Because of the time difference, you can be in your over-the-water hut by 9 or 10 AM.

Have breakfast brought out to you by an outrigger canoe. Warm up with a swim in the perpetually 80-degree water and then head to the gym. Pass heaven. Collect 200 French Polynesian Francs.

I feel pretty safe in saying that if it weren’t for the book, Pumping Iron, or the movie of the same name it inspired, you probably wouldn’t be lifting weights. More likely you’d be rolling down a hill in a zorb, bog snorkeling, or playing quidditch; anything but lifting weights.

Weight lifting, prior to Pumping Iron, was thought to be just too weird, too non-normal, and the purview of deviant homosexuals, but when Pumping Iron came out, young men everywhere thought they’d just been shown a universe populated by beings as weird and wondrous as anything in an orcs-be-damned J.R.R. Tolkien book.

And the grand poobah of these weird beings was of course an Austrian named Arnold Schwarzenegger, who, by sheer force of his personality, got introduced to the national public by a fawning Barbara Walters in 1974.

The authors of the book, Gaines and Butler, were scheduled to promote the book on The Today Show, but Barbra was reluctant to have any meatheads on the show. But Arnold’s charm lassoed in Bobwa and got her to squeeze his biceps on national television and squeal in delight. A nation had found its brand new, muscular Austrian teddy bear, complete with his funny way of talking.

The result was a generation of young men flocking to off-the-track gyms, that led to the creation of lots of mainstream gyms, that begat lots of new lifters, who begat thousands of men and women who wanted to make lifting or teaching people how to lift their career. And that led to supplement companies, and the magazines, and the contests, and websites, and the cat that ate the rat that lived in the house that Arnold built. It also, either directly or indirectly, led you to reading this site.