If there’s one macronutrient you can’t overdo, it’s protein. And if there’s one type of protein you can’t go wrong with, it’s meat. Because despite what your vegan hipster coworker keeps telling you, animal protein is the best food for building and maintaining muscle, and it’s required for a long and healthy life. But what about all those studies vegans like to quote showing that meat is “bad?” Let’s take a closer look.

1 – Meat Causes Inflammation Because of Neu5Gc!

Ever heard of Neu5Gc? It’s a sugar molecule found in red meat, and humans no longer produce it like they did 3 million years ago. Some plant-based MDs have begun to cite it as a potential problem causing inflammation and cancer. Since humans have circulating Neu5Gc antibodies for it, their claim is that the Neu5Gc we consume from muscle meat ends up in our tissues, signaling an attack from those antibodies in our blood and leading to chronic inflammation.

Possible? Maybe. Plausible? No. If this were the case, we would’ve seen chronic inflammation being an issue prior to the agricultural revolution (“Paleo” times) – which we didn’t. And we’d be seeing inflammation increase when more meat is consumed – which we don’t. In both cases, we actually see the opposite.

The other supposed source of inflammation from animal products is arachidonic acid (AA). This is actually funny because AA is a long-chain omega-6 fat that’s found in the polyunsaturated portion of meat, the one fat meat is prized for being LOW in.

More importantly, any AA contributed by meat is delivered in a nicely balanced package with the long-chain omega-3’s – EPA and DHA. That means the tissue concentrations are not lopsided towards the inflammatory effects of AA like they are after consuming heavy doses of straight-up polyunsaturated omega-6, which is typical of the meat-avoider who relies on vegetable oils and non-animal protein sources (nuts, seeds, and legumes).

The amount of AA we get from meat provides just enough to benefit cell membranes and support the inflammatory response without occupying omega-3 space and creating a pro-inflammatory environment. And realistically, high levels of both AA and omega-3 promote the lowest levels of inflammation and the highest level of health.

This is similar to our hunter-gatherer ancestors that consumed far more AA than us and experienced none of the inflammatory conditions we see today. It’s also similar to the AA found in breast milk that’s designed to help us grow and repair when we need it most, not leave us chronically inflamed.

The third piece of PETA propaganda directs us to a study in the journal Nature. That study suggests that the metabolism of the amino acid L-carnitine to TMAO accelerates artery clogging. This adds to a previous study posted two years prior in the same journal showing that high levels of TMAO equated to an increased risk of heart disease.

Fortunately, it’s not as straightforward as it sounds. There’s no need to drop the steak. The initial experiment was an observational study on just six people (five meat-eaters, one vegetarian) and the second study used an isolated carnitine supplement on mice.

Realistically, TMAO is more elevated by seafood than meat, and as a study in the journal Food Chemical Toxicology lays out, gut health is a major contributor to TMAO levels. Meaning, even if TMAO increased heart disease in humans (which there’s no proof of), it seems very likely that elevated TMAO in red meat eaters has more to do with the health of the eater and food-quality bias we commonly see with epidemiological evidence.

If excess TMAO is the result of disrupted gut health (which seems highly likely), then fast-food eating, couch surfing, beer drinking unhealthy omnivores would be the perfect candidates.

4 – Meat Will Give You Cancer Because of HAS, PAHs, and AGEs!

Most observational research trying to link meat to cancer is laughable, not only because it’s nowhere close to showing that one causes the other (correlation does not equal causation), but because it’s based on an extreme level of bias. This shoddy research uses food frequency questionnaires to gather data, does not adjust for the healthy user bias, and lumps pizza toppings and hot dogs into the same category as grass-fed beef.

That said, the meat and cancer research you may want to pay attention to are the studies looking at how meat is cooked. Heterocyclic Amines (HAs) and Polycyclic Aromatic Hydrocarbons (PAHs) are two compounds formed when meat is charred. They’ve been shown to promote cancer growth in several animal studies.

It’s definitely nothing to get all bent out of shape about since there appears to be more PAH in vegetables than cooked meat. But let this be a wake-up call to use lower heats and pay attention when you’re barbequing: don’t eat overly charred meat. Additionally, you may want to consider marinating your meat a few hours prior to cooking using acidic ingredients like vinegar. Some evidence suggests that this practice can lower the formation of these toxic compounds almost entirely. (More tips here.)

Vegans may also claim that AGEs (advanced glycation end products) are a problem when cooking meat, but research has shown that vegetarians end up with higher levels in their blood. Why? It’s largely because internal formation of AGEs (via a crappy diet) are more of a concern than ingestion and absorption. It’s also because meat is packed with natural AGEs-inhibitors like the amino acid carnosine.

5 – Meat Will Give You Cancer Because of IGF-1!

Ever since the infamous China Study – which later became a book and manifesto for vegans – there’s been speculation surrounding the growth factors in animal protein and its affect on cancer progression.

Dr. T Colin Campbell and his study subjects (which were mice) got the ball rolling back in the 1980s and scientists have been keeping a critical eye on IGF-1 ever since. You’ve probably seen headlines like, “Meat and Dairy May Be As Detrimental To Your Health As Smoking!” But the best study produced to-date was based on a mouse diet that looked like this:

The main issues? Casein has nothing to do with meat, it’s nearly impossible to eat that much cheese (even if you’re a mouse), and cancer-preventing whey is usually a packaged deal with casein.

The first problem is this unrealistic isolation of single compounds with no big-picture mindset. If we looked at what IGF-1 does for long-term health – bone building, muscle maintaining, hormone raising, and fat burning – it’s clear that elevating it should be a priority, right alongside the other sarcopenia-preventing, obesity-avoiding hormones like testosterone. The real story is that body composition has a far greater association with cancer: 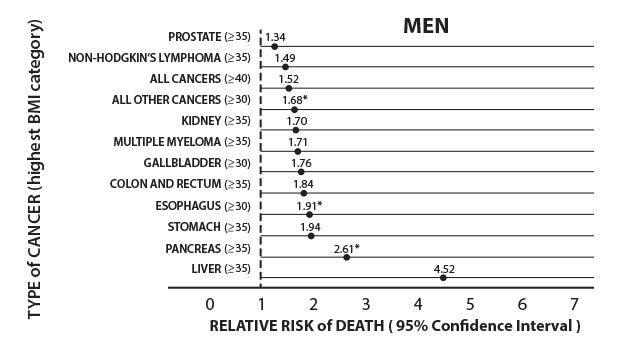 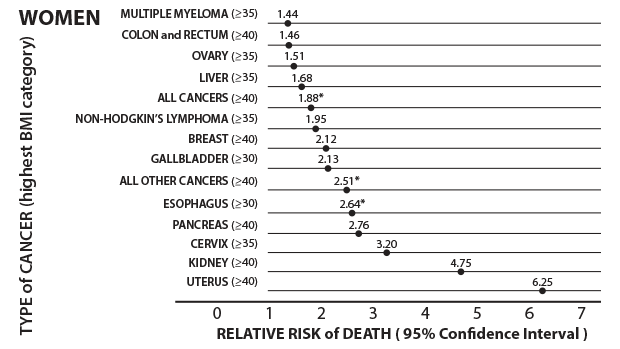 Even if we put our research caps on and analyze the evidence pinning IGF-1 to increased cancer growth, we see the same observational correlations they’ve been feeding us for years. These are arguments which can easily be addressed with an observation of our own – why have cancer rates skyrocketed as we’ve eaten considerably less dairy?

Interestingly, recent evidence suggests that all of this calorie and protein-restricting for longevity may have more to do with amino acid balance. Mice that restricted the amino acid methionine – found in meat, dairy, and eggs – saw the same beneficial reductions in oxidative stress and mortality with no reduction in calories. More importantly, mice supplementing the amino acid glycine (found in bones, connective tissue, and odd bits) experienced the same improvements.

So even if the mouse research is transferrable to humans (questionable), any potential cancer-preventing benefit from reducing protein intake has more to do with eating the whole animal than it does with eating fewer animals. For those that have trouble eating anything other than boneless, skinless, tasteless chicken breasts, a little bit of glycine could go a long way!

6 – Meat Will Destroy the Environment Because of Cow Farts!

When in doubt, play the environment card, right hippies? This is exactly what Team Tofu does, claiming that cows produce 18% of all greenhouse gases and making statements like “meat production creates more greenhouse gases than all of the transportation in the world.”

Realistically, grazing animals do more pollution REDUCTION than creation. Unlike trains, automobiles, and the private jets environmental elitists fly when they give their speeches on saving the planet, cows contribute to the grasslands ability to absorb carbon. This actually helps prevent the release of nitrous oxide. Nitrous oxide is something scientists believe to be far more damaging to the environment than carbon emissions.

Plus, any of the unbiased evidence on total methane contribution from cattle appears to suggest that this 18% value is more like 3%. And that’s if we’re talking conventionally raised cattle and ignore everything grazing animals can give back to the environment, like their ability to enrich the soil instead of destroying it like mono-crops, and nourish the population while surviving on rainfall and grass instead of irrigation and machinery.

In other words, pollution is increasing, water is decreasing, and soil is eroding because of crops, NOT cattle. If you cared that much about the environment, you’d stop buying wheat, corn, and soy, and start supporting local farms with grazing animals.