While mayonnaise might be America’s top condiment, it’s probably because old, antacid-popping white people – for whom bland is a treasured way of life – have skewed the numbers. If you were to filter out all those over-60 responses, you’d probably find that sriracha sauce, aka “rooster sauce” or “cock sauce,” would probably be the top topping, with salsa and ketchup having a tomato fight to determine second and third place.

It’s understandable because the combo of chili peppers, vinegar, garlic, sugar, and salt slaps your taste buds out of somnolence. But now there’s another great reason to appreciate the spicy sauce: The more you use it, the stronger you get.

What the Researchers Found

Why Do Peppers Make You Stronger?

What’s telling about the study was that they also looked at the consumption of sweet red peppers, but they didn’t seem to have any effect on strength. This makes you think that the increases in strength were caused by capsaicin, which is the stuff responsible for a chili’s “burn.”

Capsaicin is known to improve mitochondrial biogenesis and the production of ATP, the energy currency of the cell. It also has analgesic effects, which, theoretically, and at least as supported by one previous study, could lead to additional reps being performed.

However, as far as this current study is concerned, the increases in strength probably have more to do with increased production of ATP. 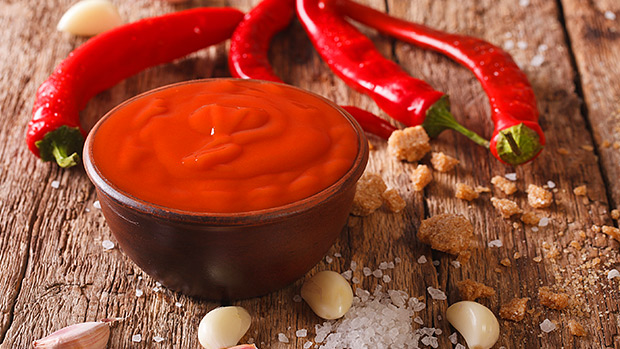 Granted, this particular study didn’t involve the use of rooster sauce, but it’s no great stretch of the imagination to conclude that the results are applicable to that condiment and all similarly spicy sauces. After all, the main ingredient in sriracha is red chilies.

It also suggests that the effects may be related to a chili’s “heat,” i.e., the amount of capsaicin it contains, which is measured in what’s known as Scoville heat units. For instance, if you regularly use sriracha sauce, you’re ingesting a chili that has a heat level of between 1,500 and 15,000 Scoville units. Contrast that with the 1,150,000 to 16,000,000 Scoville units generated by the world champion “Carolina Reaper” pepper.

None of this is to suggest that you tear up your gut by popping Carolina Reapers before you train. Besides, we have no way of knowing when “more is better” turns into, “My God, that basket of hot peppers just killed Maury!”

Look, if you already spice up your foods with sriracha sauce or something similar, this study might give you another reason to appreciate the sauce. If you don’t currently use it, you might just have a reason to swap out your ketchup for some red rooster sauce. The effects might not translate into much measurable effect, but every little bit helps, right?