Okay, maybe your fancy pink sea salt contains a few more nano particles of certain elements like calcium, iron, copper, and a few others, but they're trace elements.

For instance, a teaspoon of sea salt contains around .2 mg of iron. That's fine, but your daily value of iron, if you're a man, is about 8 mg. If you're a woman, it's about 18 mg. Either way, if you're depending on sea salt to fulfill your daily requirements for certain minerals, you're not a human – you're a flounder.

It's true that table salt is heavily processed and has virtually no trace elements, but it usually has what sea salt is missing, and that's iodine.

The Morton Salt Company started adding the chemical to their table salt back in 1924 because too many people who lived far away from the ocean weren't getting any seafood and hence little to no iodine. Huge thyroid nodules and goiters became commonplace and a significant portion of America looked like a traveling circus freak show.

Kids in the 4H club would take their parents and grandparents to the state fair to show off their prodigious goiters and hopefully take home the first-place ribbon. Okay maybe not, but it was bad.

And because of all the attention fancy salts have been getting, iodine deficiencies and thyroid problems (e.g., a malfunctioning metabolism, nodules, and even goiters) are again on the rise.

So put away your pink Himalayan sea salt. Or add least add some plain old iodized salt to your pantry. 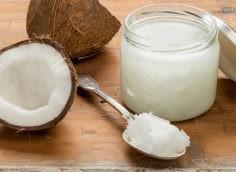 Why is one considered bad and the other good? Here's the real story.
Dietary Myth Busting, Feeding the Ideal Body, Nutrition & Supplements, Tips
TC Luoma January 28

As athletes, our workouts take precedence over just about anything. We may occasionally cut class or call in sick for work, but miss a workout? Not on your life. Likewise, we're so very, very careful about how we eat.
Nutrition & Supplements, Testosterone Boosters
Nelson Montana May 15
The fitness magazines are full of them. The bodybuilding rags are full of them. Even T-Nation is full of them: articles about how to lose fat and discover your abs. What's missing? Simple: Info on how to stay that way once you've reached your goal.
Feeding the Ideal Body, Nutrition & Supplements
Chris Shugart November 10

Your food choices can change how you smell. Here's what to eat, according to science, to produce sweat that attracts women.
Diet Strategy, Feeding the Ideal Body, Nutrition & Supplements, Tips
Tessa Gurley September 2