Here's the problem: Most women who continually make fat loss a priority don't realize that they'd become more efficient at burning fat if they simply had more muscle. Eating to weigh less will make women smaller, which will require them to eat less in order to stay smaller. Muscle is lost, metabolism is sluggish, calories have to be lowered again and again, and the downward spiral eventually spirals out of control. Soon, these women proclaim that "dieting doesn't work!"

Unless they're dangerously overweight, most women would do better by trading the smallness and fat-loss game for muscle growth and permanent leanness. Continually chasing fat loss in unproductive ways will eat away at their muscle more than women know. If they made hypertrophy a greater priority than fat loss, the weight loss would eventually happen – slowly at first, but steadily, healthfully, and permanently.

Sure, most fat loss strategies work at first. But then the body adapts, plateaus, and regresses as muscle is catabolized. This is bad news, especially in the midst of lots of strenuous exercise, because a loss of muscle just leads to a skinny-fat body and a handicapped metabolism. The best way for women to not adapt to fat loss strategies is to make their bodies more efficient at burning fat – then if they must use a diet, it will only take a small and temporary tweak to get back on track. Women who are perpetually playing the fat loss game are either doing it wrong or they're emaciated.

How can women get to a place where they don't need to diet? By building more muscle with weight training and eating as though they want more muscle on their bodies. This doesn't mean eating crap; this means fueling up for workouts in order to work harder, pump nutrients into muscle cells, and feel muscles working. Then when they get to the gym, they'll need to actually try to build muscle. How? By lifting weights that are heavy enough to challenge them and by seeking the muscle ache and tightness that indicate work is being done.

It's a lot different than just going through the motions with pink dumbbells or running on the fumes of their 100 calorie breakfast. It requires focus and an actual desire to build. It's true that it's tougher to gain muscle and lose body fat at the same time, but what women can do is build muscle so that their bodies eventually become better at burning fat even when they're not necessarily trying to. 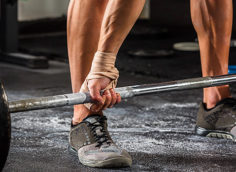 Read this and you'll know more about the causes of poor form and how to fix it than any form Nazi in your gym.
Bodybuilding, Tips, Training
Charles Staley June 7

Everything a weight-lifting woman ever wanted to know about breast implants but was afraid to ask.
For Women, Training
Dani Shugart February 9