Let’s First Get One Thing Straight…

Milk is what female mammals secrete to nourish their young, so calling the liquid you get by pulverizing any of various seeds, nuts, or fruits “milk” is hugely inaccurate. There are, after all, no soybeans, almonds, oats, or coconuts that lactate, even though the last one kind of looks like a hairy hooter.

Regardless of what you call them, these plant-based juices are hugely popular. Just stand in line at your local Starbucks and see how many hamsters signal their nutritional virtue by ordering their lattes with one of these milk alternatives (as if replacing milk with a dollop of one of these sugar-saturated Frankenjuices is going to make a difference in their health).

Any way you look at it, though, regular, whole-fat milk is nutritionally superior to all of the plant-based alternatives. There are, however, two completely valid reasons not to make milk your choice of liquid to pour on your cereal, mix in your protein drink, or whiten up your coffee – one, you’re vegan, which by definition rules out cow’s milk, or two, you’re lactose intolerant, in which case cow’s milk is your digestive enemy.

I should also accept that many of you, because of pasteurization, the China Study, or maybe because it comes out of a cow’s lady parts, think that cow’s milk is what the devil dips his raspberry scones into and thus won’t touch it. Fine. Those delusions are, as they say, beyond the scope of this article.

Regardless of your reasons, there’s one, possibly two, milk substitutes that make for a valid alternative to milk. They’re oat milk and cashew milk. 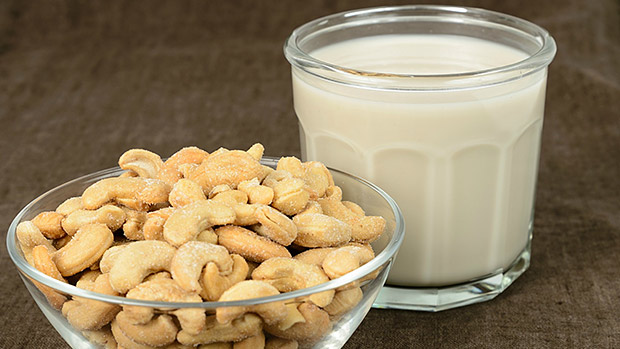 A Bunch of Players But None of Them Starters

The idea behind most plant-based milks sounds great. Sure, mash up some plant matter. Strain out the crap, add water, and fill up on pure plant nutrients, proteins, and fatty acids.

Too bad it doesn’t really pan out that way. Take almond milk, for instance. It gives you none (or very little) of the benefits of almonds, which include proteins and good fats, and neither does it give you the benefits of regular milk since it lacks calcium.

For one thing, each carton only contains a handful of almonds, and the handful in question is a wee, gnarled, arthritic thing that can only scoop up a couple of almonds without spilling them onto her orthopedic shoes.

Not only that, but when you strain out the insoluble stuff from the “milk,” you lose most of the stuff you’d eat almonds for in the first place. Of course, manufacturers usually add calcium and vitamins A, D, and B-12 (along with a bunch of sugar, unless you get unsweetened variety), but you’re still getting very little protein – about 1 gram per cup, compared to about 8 grams for milk.

It’s true, though, that almond milk is generally 50% lower in calories than cow’s milk since it lacks any significant amounts of fat and, since it’s not an animal product, it contains no saturated fat or cholesterol… if any of that matters to you. (Unsweetened almond milk is also virtually carb-free if that’s something you’re looking out for.)

Few of the other milk substitutes fare much better as they each have their individual drawbacks. Pea protein milk is higher in protein than almost all of the others, but it’s not made with the whole pea and, as such, lacks the polyphenols that would make it a truly healthy drink. Plus, its second major ingredient is sunflower oil, which is rich in the omega 6 fatty acids that most of us already sop up too much of every day.

Coconut milk tastes great as it’s just watered down coconut fat. It’s probably similar in nutritional value to some of the nut drinks, but it’s really calorie dense, especially if you choose a sweetened variety. Of course, if you want to cash in on MCT oils (of which all four varieties are present in coconut milk), drinking it is an okay strategy since approximately 60% of its fatty acid content is made up of MCTs.

Soymilk, one of the pioneers of the genre, is higher in protein than some of the nut based milks, but it’s basically intolerable, taste-wise (unless you choose one that’s been sweetened up the wazoo), and it’s so pale and watery that I’m surprised they haven’t slapped a Coors label on it to expand their market.

Another strike against soymilk is the possible presence of certain plant isoflavones that mimic estrogen and can, in the long run, create hormonal havoc in both men and women.

That pretty much leaves us with oat milk and cashew nut milk. 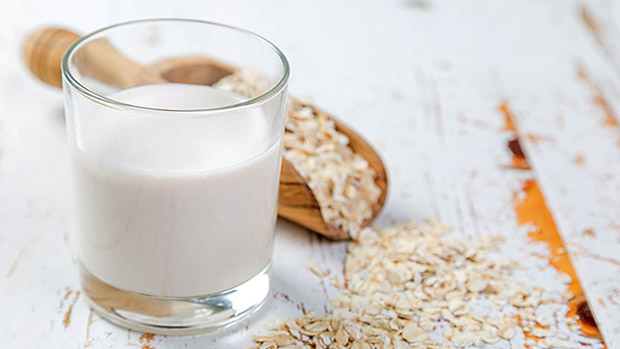 So Why Do Oat Milk and Cashew Nut Get a Pass?

Most oat milks are made of nothing but oats, water (in the ratio of 1 cup of oats to three-fourths cup of water), sea salt, and a bit of rapeseed oil. Nutritionally, each cup has about 120 calories, 5 grams of fat, 16 grams of carbs (of which 7 are from naturally occurring sugars), 2 grams of fiber, and about 3 grams of protein.

Compared to milk, that’s a little more sugar, a little less fat, and a lot less protein, but drinking milk alternatives for their protein is like eating rum raisin ice cream to fulfill your daily requirement for fruit.

What it has over all the other milk alternatives, including milk itself, is fiber – about 2 gram’s worth per serving. That’s not a whole lot, but it’s better than nothing. Appearance and taste-wise, it’s thicker and frothier than the other substitutes, and its taste is in the ballpark of milk.

As far as cashew nut milk, most nut-based milks only contain a smattering of actual nuts, but there are the equivalent of about 11 cashews in each glass of cashew nut milk (about four times the amount in other nut drinks).

It only has 4 grams of protein per 8-ounce glass, but again, I’ll assume you’re not drinking these for their protein content. Still, if you get the sugar-free kind, cashew milk can legitimately be called nutritious and even healthy.

As Always, It Depends On Your Goal

Ultimately, which drink you choose has more to do with your personal goals than actual health. None of the drinks listed above are as healthy as maybe a cup of coffee, a few ounces of kefir, or, or course, actual milk.

But if you want something relatively healthy to pour onto your cereal instead of milk, go with oat milk or cashew nut milk. If you’re just trying to cut calories, opt for something like an unsweetened almond milk and get your actual nutrition from the low-cal whole foods you’re eating.